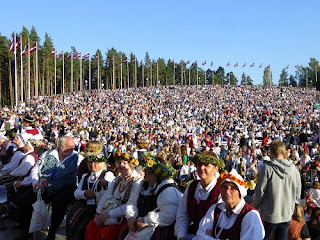 Another quick post from the eye of the peaceful storm (now, on an official public holiday, the calm aftermath). The gathering of the 16,500 choral singers last night, to an audience of 70,000 in the grand pine-tree-surrounded stadium of Riga's forest park, was quite a sequel to the dizzying dances extravaganza of the previous evening (see previous post). Rich a cappella classics dating back as far, in some cases, as the first festival of 1873, led by a host of conductors including many women, 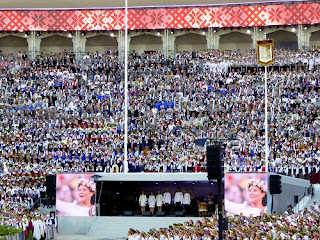 were interlaced, over a period of four and a half hours (no interval!), with poppier numbers that clearly had great emotional significance for all Latvians (lots of iPhone waving to this one). 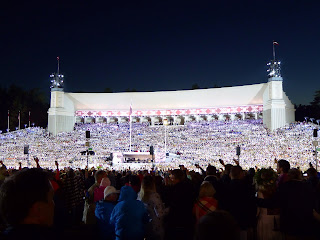 Mixed feelings, then, but we did it! And proud that our young friends Artis and Kristaps participated for the first time, and loved it. 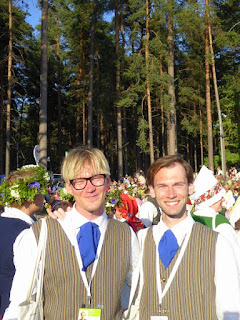 They went on singing until 4 in the morning. Post vivem in town shortly...
Posted by David at 09:47

Very reminiscent of the Estonian Song Festival we attended while in Tallinn, then, which was also mixed in terms of the choice of music, but it was still wonderful to see this tradition thriving. We did not, however, have your stamina—we were there an hour or so, standing room only, then watched the rest on television at our hotel.

It's much easier to have stamina when you have a seat with loads of legroom, easy access to an aisle and the prospect of diplomatic buses whizzing you back to the centre of town shortly after the end of the event (though the stadium at Tallinn is easy walking distance; the forest parks in Riga much less so).