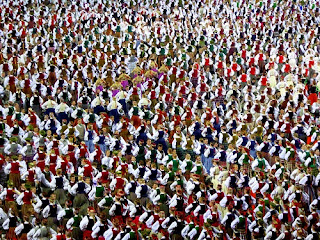 Just a quick post, with jaw still open, to show the grand finale of  the Latvian Dance Featival last night. Patriotism (as opposed to nationalism) can be a glorious thing. This is the only point at which there was no space to whirl after two and a half astonishing hours. 18,174 dancers from 739 dance groups from within Latvia and from the world diaspora, having rehearsed for the past five years, performing to an audience of a a mere 5,000. Over in the woodland stadium, 16,500 singers from 427 choirs were holding their dress rehearsal to an audience of 60,000 - another of that number are the lucky ticket holders for tonight (ourselves very honoured to be included - demand was ten times the supply, and tickets sold out within hours on the day of release). Our friends Kristaps and Artis will be participating. No wonder this is listed by UNESCO as a 'masterpiece of humanity'. 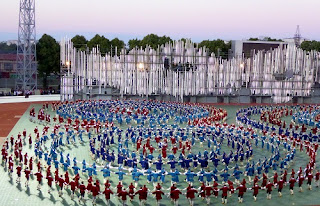 This is magnificent! How wonderful that you are there to be an eye and ear witness, and I look forward to your upcoming reports!

Slightly more mixed feelings about the four and a half hour choral epic tonight - all superbly done, but the a cappella classics sit rather uneasily alongside cheesy music to stirring words from the 1970s onwards... But what a feat of co-ordination (and five years of practice!)

Such a charming and charmed life you lead and I consider myself amongst the fortunate that can share it at a distance.

Well, this did feel charmed - but it's something I've wanted to do for a long time ever since I met a lady from Hobart on a plane to Savonlinna. She'd just come from the Song Festival and told me all about it. Choirs of tens of thousands! Then I heard more from my Estonian friends. Their five-yearly spectacular is next year. Have to compare and contrast. Not sure they do the dancing on this scale, though.