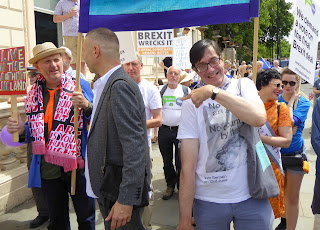 Here we went again, this time on the People's Vote march (well reported, for once, on the BBC news), in the warmth of a beautiful June day. It wasn't as long a march as the one in March - only from the end of Pall Mall to Parliament Square, rather than starting at Hyde Park Corner - but the numbers seem to have been an estimated 100,000. What made my day was that as we were standing around waiting for the start (it took an hour), J spotted that celebrated artist and passionate Europhile Wolfgang Tillmans. And as I was wearing my T-shirt with his design ('No man is an island, no country by itself'), I wanted to point it out to him. Little thinking that he would snap and instagram me. This ain't flattering, but hey, it's a Tillmans. 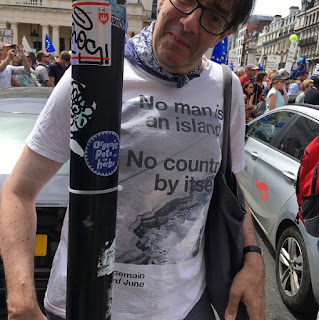 We met up with friends Susannah and Jamie at the park cafe where in fact they were married on the roof (I served as celebrant). Cycling in from the west, it was good to see so many small groups assembling to head to Pall Mall, and in the park there was a heartening flag on the bridge. 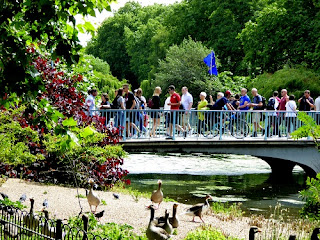 The standing about was not without the pleasure of reading signs 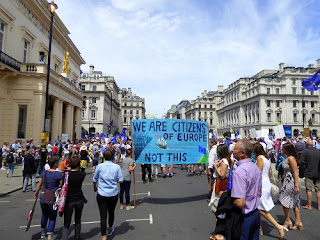 and conversing with sundry canines. 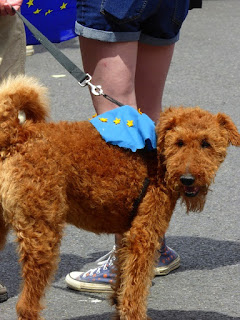 There's actually going to be a convergence of the 'Wooferendum' to 'hound' Mrs Mayhem in Downing Street, as this jolly couple advertised. 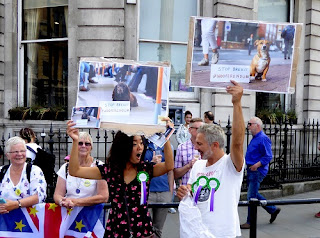 Here's a better shot of the very dapper and handsome Herr Tillmans in conversation. 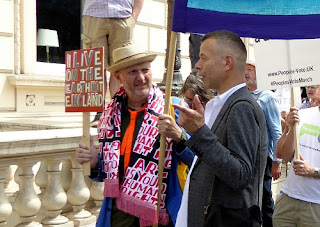 And we're off. The organised signs behind us 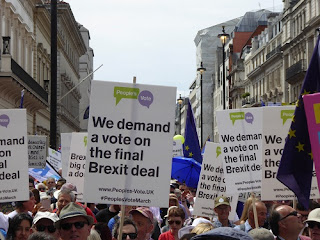 and a specially splendid one in front. 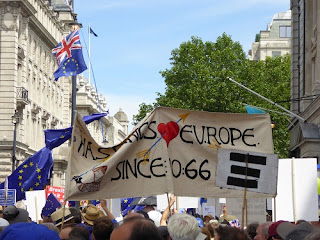 Quickly arriving at Trafalgar Square, which yields similar shots to last time from the west side 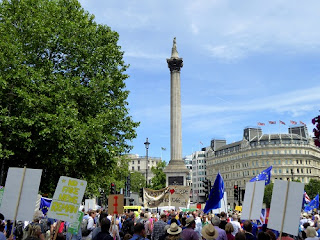 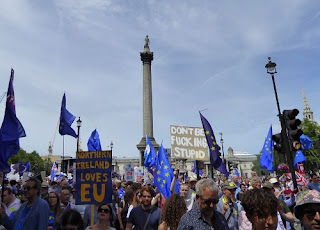 and then down Whitehall. 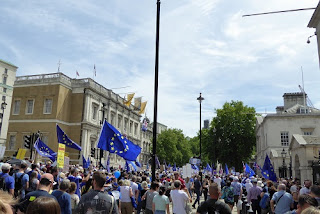 I had to leave the others at Horse Guards Parade as I was off to catch an early evening and late night concert at the wonderful Peasmarsh Festival (Arts Desk review imminent), and returned on Sunday morning to a blooming Chelsea Physic Garden. Should just sign off this quick one with celebration of a true European, our very dear friend Edward Mendelsohn, a fixture here since he arrived on the last Kindertransport from Vienna. We were honoured to be at a small dinner party to celebrate his 90th birthday. Needless to say he is, touch wood, in excellent physical and mental health, and you'd probably knock 20 years off his age looking at this photo. 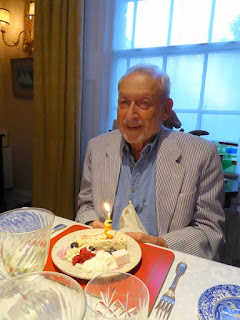 Mesnwhile, Tillmans' pre-Referendum campaign posters remain as relevant as ever: 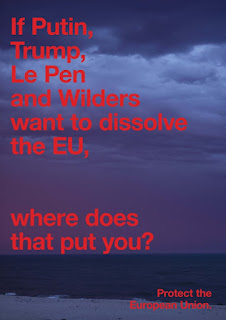 I absolutely love the fact that you have been memorialized in that excellent T-shirt by Tillmans himself. The March looks to have been joyous, and of course it is in for the most noble of causes. We must have hope, mustn’t we, even in these terribly dark times?I am sorry, BTW, not to be able to keep up over here—I am afraid, at the moment, our own worthy cause has become something of a full time into overtime job, and the worst of it is there is simply no telling how things will turn out.

We need these marches as much for solidarity as for hope that we just might change our stubborn, hard-hearted and irresponsible leader's mind. Possibly more so. I am DELIGHTED you are working so hard on the grass-roots cause. There is indeed 'no telling how things will turn out' - the present stage is almost the worst of it, in that we see that even when your Monster in Chief turns to blatantly Fascist tactics, too large a chunk of the population stays with him. I fear it may even be the same with Brexit. Certainly the darkest times I've ever lived through.

That's the best to be hoped for. Though the Commons have not failed to disappoint us in every respect so far.

I'm not sure what is happening but I am not getting notification of your updates. I very fondly recall a Sunday meal chez vous with Edward Mendelsohn. Truly memorable and enjoyable on so many levels. Please send him my greetings when next you see him.

Next time - and may it not be too far away - let's see if we can serve up Wolfgang Tillmans...Shall pass on your best to Edward.

As for updates, I've no idea how they work. I just drop in on your and Laurent's blogs on a regular basis.