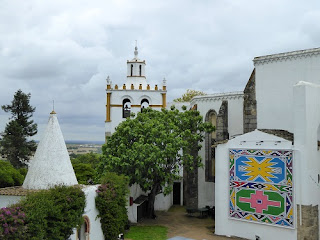 Fresh from four exhilarating days at the Setúbal Music Festival - I have yet to write up the report of this year's spectacular for The Arts Desk, but here's one from 2014 - I wasn't expecting something quite as extraordinary as the centrepiece of another festival in the beautiful Alentejo town of Évora - African Passions. Curated by the incredibly impressive and widely travelled Alexandra de Cadaval, it makes superb use of the exhibition rooms in the family's palace. 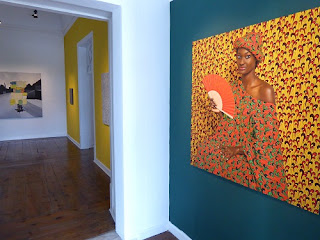 It's especially appropriate since, although all 16 artists represented come from sub-Saharan Africa - and, as ever, beg the question, should we be lumping so many countries together under the aegis of 'African art'? - the Palácio dos Duques de Cadaval is built, like all else in Évora, on the 450-year period of Moorish rule established by Tariq ibn-Zayad in 715 (the Moors were driven out of Portugal much earlier than they were in Spain, so there are no great monuments to compare to the mosque in Cordoba or the Alhambra). Earlier still, the Romans were here, and the gem of Évora's UNESCO World Heritage status has to be the Temple of Diana (so called) on what is essentially the acropolis (the Cathedral is almost, but not quite, on the same level). 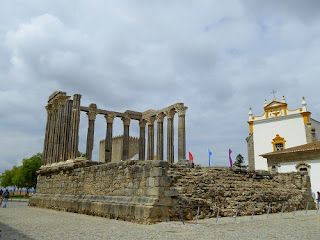 Some of our fellow guests in Setúbal had been at the festival opening in Évora, to the accompaniment of a dramatic thunderstorm of which we had no inkling on the coast (where the sun shone every day; inland, it remained mostly grey and the rest of Europe seemed to be drowning). We were sorry to be missing one of the many musical events by taking a flight back that evening; tanked up to trance state by litres of beer, men from Burkina Faso were to hold a full moon Bwaba ceremony at the cromlech outside town. But at least our experience followed a ritual route, starting by entry into the former convent church next to the palace, the Igreja dos Loios, via the Gothic doorway and the escutcheon of the Cadavals. 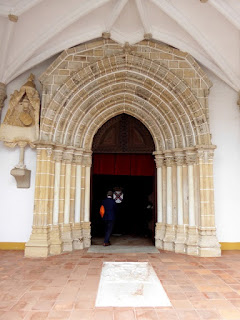 In front of the high altar, flanked by the floor-to-ceiling azulejo tiles showing scenes from the life of  São Lourenço Justiniano, founder of the Loios, Benin artist Romuauld Hazoumè's Osa La, made of fabric and trailing plastic containers, evokes Yoruba ritual parallel to the Catholic one represented in the church. 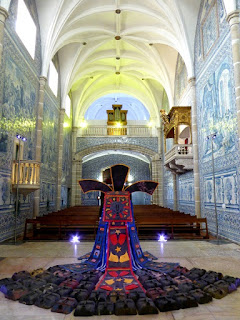 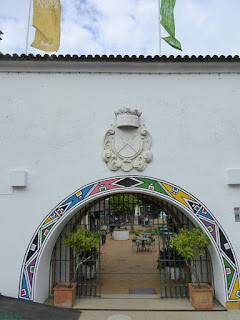 as well as a new canvas seen on a wall of the courtyard up top (the heritage status meant it couldn't be done directly) and this old motorbike dug out by Alexandra. 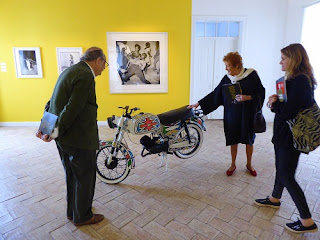 It sits aptly in the centre of the first room, celebrating the artist we know best from his association with Sophie in Mali, photographer Malick Sidibé (born in the same year as Esther Mahlangu, 1935; he died in 2016). The bike, its provenance being explained by Alexandra above to Hugo O'Neill (more on him anon when I return to the subject of Setubal) and Lady Hamlyn is well in accord with the lovely scenes of urban life in the nightclubs and dance halls of Bamako. The Helen Hamlyn Trust is one of the sponsors of both Setúbal and Évora festivals.

Turn to the left and in the first of a long sequence of light-filled rooms, each of which is enriched by the perspective on the others, there are further exuberant, this time colour, images brimming with African vitality. JP Mika's La belle ambiance even reflects Sidibe's most adorable image, of the dancing couple, 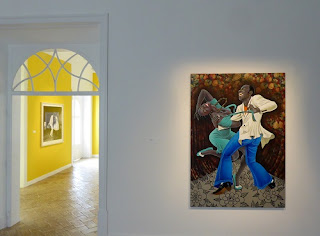 while Chéri Samba, like Mika from the DRC, gives space to the young and old. 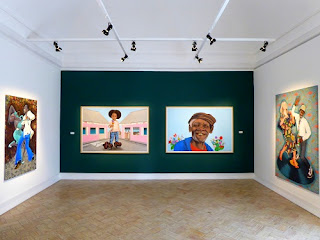 Mika, quite a character by all accounts who to homage the Alentejo turned up in cork hat and suit, dances us into the next room 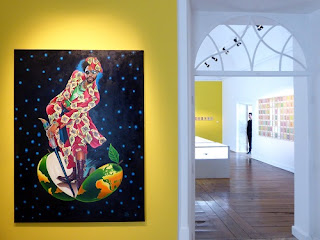 which offers another joyous perspective in Cote Ivoirien Frédéric Boulay Boubaré's 213 drawings imagining his mother travelling the world on crutches. She not only visits European countries; the EU flag also gets a look-in. Each drawing is subtly, and mostly humorously different. 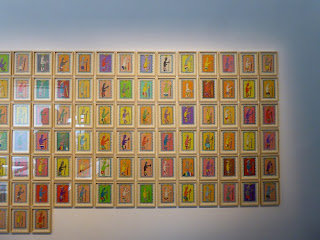 Rather whizzing on now through the rooms - and nothing I saw was unworthy of attention - here's the obsessive working in black and white - with just a bit of pink - by the DRC's Houston Maludi. 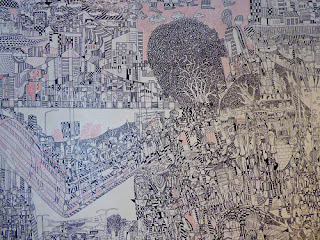 Malian Toussaint Dembelé's colour to monochrome is in the loads of cyclists. The painting I'd take away with me from the exhibition is on the right. 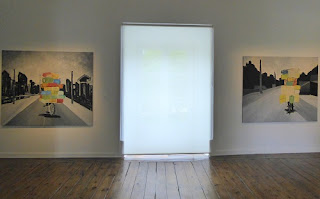 A third Malian, Amadou Sanogo, could be giving us another Ubu Roi series with A Votre Avis 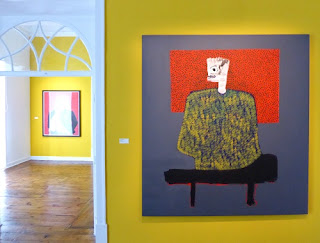 while the portrait in the next room, mostly obliterated by the light in the distance above, is by Filipe Branquinho of Mozambique. 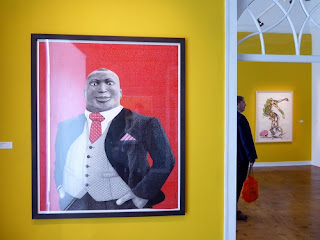 Mauro Pinto, from the same country with ties to Portugal, has photographed tribal ritual, which Alexandra is explaining to Helen. 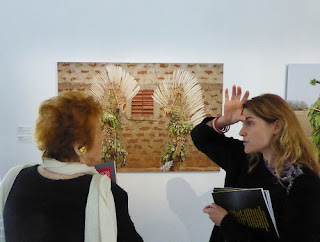 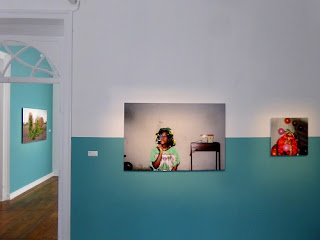 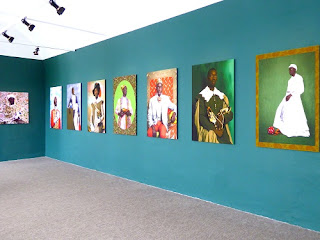 of which this perhaps is my favourite 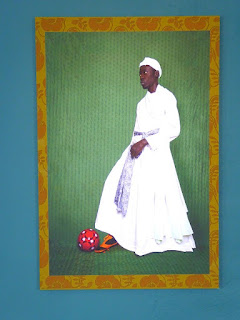 though the portrait of the woman with a fan depicted in the second picture from the top is justly the cover image for the exhibition. I can't recommend a visit too strongly - it runs until 25 August.

Our run of superb lunches continued at the four-table Tasquina d'Oliviera, drooling over items at which I'll spare you, after which J and I took a much-needed walk along the colonnades of the lower old town until we reached Évora's main square 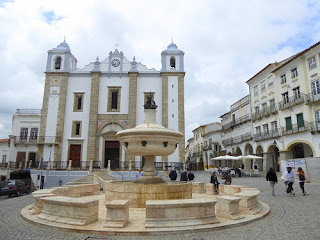 of which you may see more, as well as other parts of Évora we didn't have time to see, in a video by my latest discovery, folk singer and heroine of the Alentejo Celina da Piedade. I love her smile and her brio - she's a consummate performer as well as perfect crowd-worker, as we witnessed on our first evening in Setúbal

All we had time left to see was the Cathedral - fortress-like without, begun in Romanesque style, mostly Gothic within, and unhappily restored. 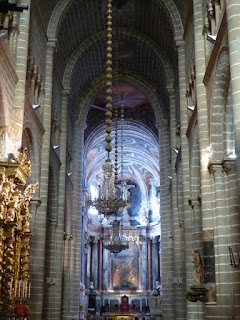 Looks like too much may have been done to the statues of the Apostles either side of the west doorway, if indeed they're still originals, 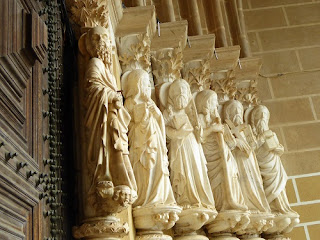 but the detail is especially fine on St Peter. 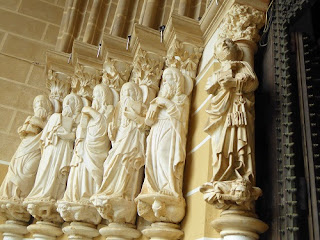 The cloisters are rather splendid, 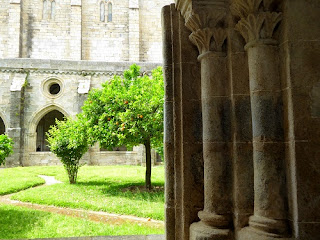 especially since you can take one of two spiral stone staircases up on to the roof. 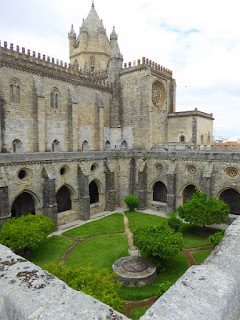 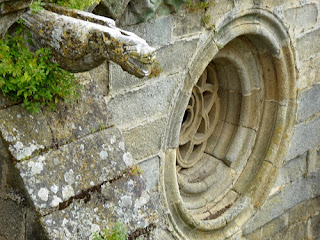 In the south-east corner there's the tomb of the fundador, Bishop Pedro, 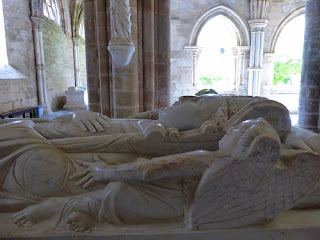 with a fine crucifixion frieze beneath his head and on one of the lions' backs. 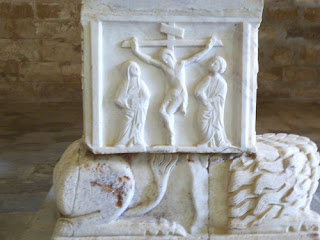 The well laid out cathedral museum contains way too much samey stuff for my taste. Two things stood out: a small piece of 4th century fabric with praise to the Lord in Arabic, and this 12-inch-high Gothic ivory statue of Mary, opening out into a triptych with nine scenes of her life. 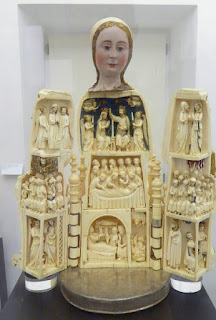 A French work of the 13th century, with a replica head from the 16th century, it must have been a gift to the town. 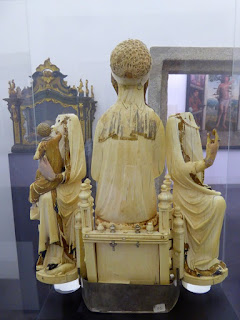 I wish we'd had more time for treasures in the main museum - less sorry about not seeing St Francis's chapel of bones, which  was not going to outstrip the crypt of All Saints Sedlec just outside Kutna Hora in Czechia - but Lisbon and the airport were calling. We'd hoped to see the cromlech on the way out, but our driver told us it was too far off the main road and so - whizzing back past the fabulous landscape of cork trees on undulating hills and little sign of habitation, later storks and their nests on pylons - we headed for home.

the art exhibition does look very good- there are some VERY good photographers from Mali of course, but I rather wish 'we' had some more top class painters...

But here are two, surely, one of them - Toussaint Dembelé - my personal favourite.

What a magnificent exhibit! I so wish we didn't have to cross the Atlantic every time we want to visit places in Europe. We are trying to decide on a trip to somewhere in Italy for September (we couldn't put together one to Scandinavia we'd hoped to do for June), and it is just mind-boggling to try and figure out what tiny corner we can manage. In the course of it, I thought back fondly on our trip to Portugal--we loved our time in the Alentejo, but saw only a bit, and not Evora--and now here you are, with posts of two of my favorite places: Estonia--though we saw only Tallinn--and Portugal.

Maybe time to explore the Marche if you're prepared to hire a car? I can recommend some wonderful places, and at least one really excellent villa-hotel (not expensive when we first went so many years ago).

I have just looked into the Marche, and I think this may well be the answer to what we're looking for in our next trip. I'll write to get some info from you, and thanks so much for the suggestion.

Shall be very happy to oblige - though I realised, with a lump in my throat, that our favourite base for walking in the Sibellini mountains, Castelluccio, was destroyed in the recent earthquake.