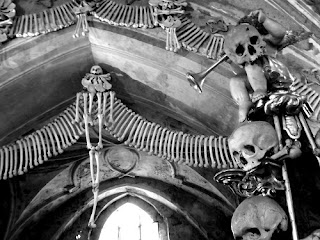 Much as I deplore the imported Hallowe'en overkill and the infantilised craze for zombification, I can't help using the occasion as a pretext for catching up with coverage of an extraordinary place I never got round to writing about last summer. The subterranean kostnice or ossuary beneath the Church of All Saints in Sedlec, virtually a suburb of Kutná Hora in the Czech republic, outstrips the equivalents I've seen in Italy, even if there is no dressing-up of skeletons. 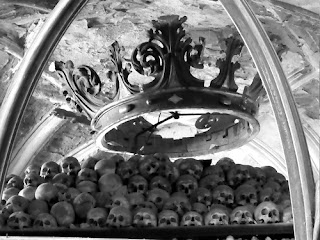 Instead the estimated 40 to 70 thousand complete sets accumulated since the scattering of holy earth from the presumed Golgotha in 1278, an occasion which had the Bohemian aristocracy wanting to be laid to rest in the cemetery, were fashioned into bizarre sculptures. 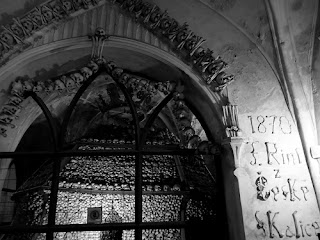 This happened in 1870, when woodcarver (!) František Rint did his damnedest with the remains, signing his name in bones. His pièce de resistance, a chandelier rendered from every bone in the human body, had been taken away for restoration when we visited, but there was no shortage of kitschy-ghoulish spectacle, and as - rather unusually, I gather, we had the place more or less to ourselves, the atmosphere was strong. First, a view towards the altar 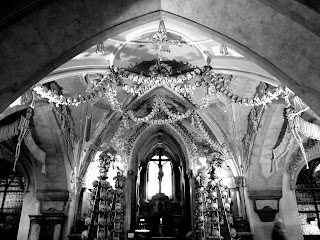 and back towards the west end. The pyramids remind me of similar decoration in the very different context of the 18th century Vogelsaal in Bamberg's Natural History Museum. 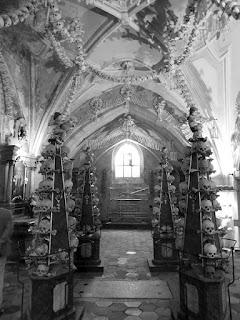 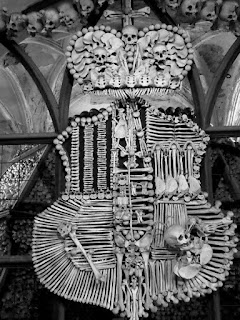 and even the vases on the steps down to the crypt are bone-wrought. 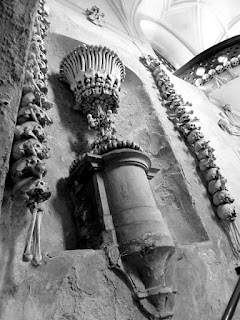 Since we're in Kutná Hora - for which we were so grateful to Zdeněk Porybný's driver for giving us the chance to see on the way back from lovely Litomyšl and Martinů's home town of Polička - I ought to revert to colour to hymn the greater artistic treasure, and one of the most beautiful buildings in Czechia, the Cathedral of Sv Barbora. 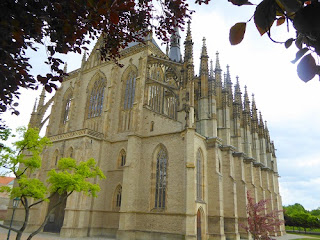 Kutna Hora's one-time prosperity as the second finest city in Bohemia next to Prague came about from its copper and silver deposits. They were mined by Germans and circa 1300 Vaclav II set up the Royal Mint here, importing Florentines for the purpose. The minters' chapel is frescoed with their work. 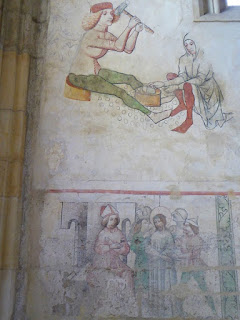 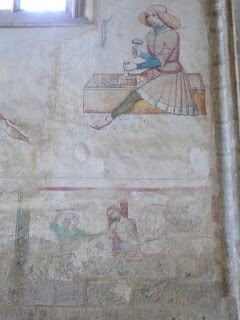 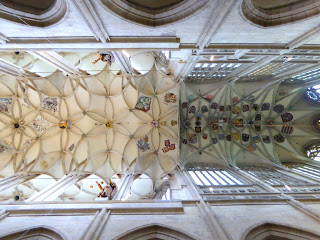 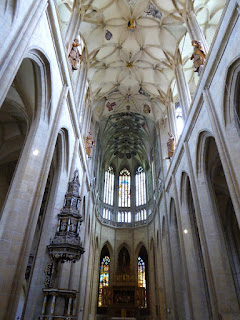 and the riot of pinnacles, finials and buttresses makes the outside ensemble - despite additions of later periods - one of the most harmonious of any religious edifice. 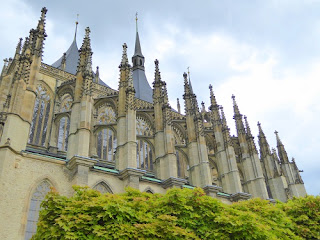 Though we actually entered through the gardens at the east end, 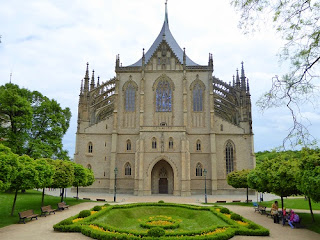 the Cathedral is perhaps best approached by a walkway with statues rivalling those on Prague's Charles Bridge to your left and the 17th century former Jesuit college to the right. 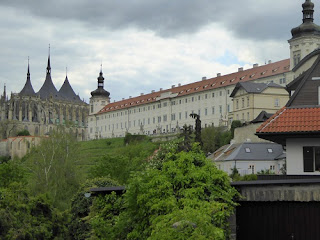 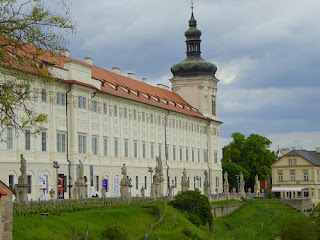 Even better are the views from sundry lower paths, 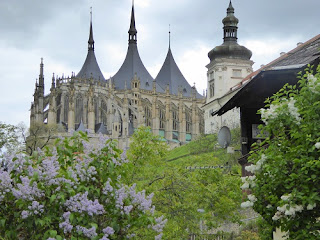 and the woods are always close to hand, full of birdsong in May. 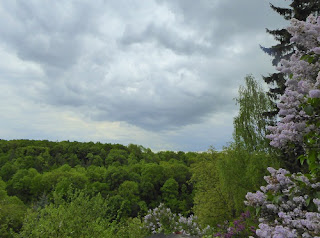 Back to bones to conclude - I only recently found out that Saint-Saëns expanded his Danse Macabre into the celebrated tone-poem from a song set to part of a poem by Henri Cazalis. Who better to sing it than the great José van Dam, with Jean-Philippe Collard?

Again you take me to marvelous places with your photos and words. Many thanks.

Grab a neighbour's broomstick tonight, Will, and you could be there in no time...

So apt for Halloween, and far better, to be sure, than the plastic blow-ups festooning so many houses upstate. (Our apartment lobby, come to think of it, is festooned as well, though without the plastic blow-ups and with considerably more wry humor, including a sign over the front door that says "asylum.") On the subject of Collard (and also on the subject browsing, as per my comment in your previous post), today I went, after a long absence, to Academy Records, where it is still possible to browse among CDs (all second hand) and even LPs. I almost never find exactly what I'm looking for, but that's half the pleasure of it. This time, one thing on my list was Rachmaninov's Etudes-Tableaux by Hayroudinoff (I think this may have been a recommendation you made, not sure). Not to be had, but I did walk away with an Etudes-Tableaux performed by Collard, along with some Poulenc piano pieces, a couple Argerich CDs (Schumann/Ravel), and Haydn piano sonatas (Hamelin). Not a bad haul, I thought. (PS, per your reply to my comment on the Jan Kross, yes indeed, the first chapter is compelling--the epitome of in medias res. I'm enjoying the book very much, though as you can tell, I don't read at your pace, as I'm still in the midst!)

I never knew the Brits to be quite so crazy about Hallowe'en. Cycling to Leif Ove Andsnes' Festival Hall recital last night - transcendental - via J's latest exhibition opening (very impressive Finnish straw sculptures, I kid you not) - I must have seen thousands of kids and their parents in various states of fancy dress; hordes of them around the posh houses in The Boltons. Well, as Josie says, you can't begrudge children having fun, but I do think older youth should just grow up. Bah humbug!

Haven't heard Collard for years - used to think he was a so-so pianist. You're right, there's no substitute for browsing in second-hand (or for that matter new) book and record stores - the serendipitous can be so exciting. The Lighthouse path, for instance, led me to Nan Shepherd, sublime nature-writer, though I admit Robert MacFarlane had put her on the map for me a couple of years ago.

The tremendous excitement over Halloween may be another if minor sign of the fact that the human mind cannot take too much pressure either individually or as a crowd. If there is too much pressure, the intellect, the mind, indeed the personality, are overwhelmed by the flood of unsettling emotions which emerge like a fountain in our subconscious mind. Rational argument becomes impossible - as in the case of Brexit, the sex scandals, the NHS, Islam etc. This pressure results from the vast and constant influence on our minds of the media both formal( TV etc) and social, with people shouting from the housetops all the time. Now that the furies are out of Pandora's box there is no hope of putting them back. As an illustration, we can note the results of a survey of why so many young people commit suicide in New Zealand - the answer is concern about school grades, getting into university, getting a job, getting somewhere to live. Why are these things only now a suicidal concern? I exaggerate, but what I describe is already a large factor in life today and the trend is this direction is almost certain get worse.

Food for thought indeed. I was talking only yesterday with a psychotherapist friend about analysing collective insanity or instability - the various phenomena and causes of the Brexit madness and America's path to appointing the Moron-in-Chief need proper studies. Does mankind hate so-called peace and have a periodic lemming-instinct? And your remark about suicides in New Zealand reminds me that there was a whole wave of suicides in Russia at the turn of the century (19th and 20th) - was it a fashion or a sign of the instability of the times? These things would seem to be infectious.

On one thing I disagree - the Pandora's Box image may be slightly false. The ills can once again be marshalled, the curve can turn back again as it did in western Europe after World War Two.

The cathedral at Kutna Hora is as you indicate sensationally beautiful. Like so many buildings in Bohemia and Moravia it shows the high civilisation (and the wealth) of Bohemia ( I wish they would revert to that name instead of Czechia) which existed over the centuries. The Habsburgs in many directions did not do a bad job on the culture front, though one cannot feel other than pained to see in many portraits the bright intelligent faces of the aristocracy before the battle of the White Mountain ( 1620) and the heavy Germanic faces of the aristocracy imposed afterwards. Because of the horrors of communism these Central European countries were cut off from us for so long. The only good result over those years was that because of the incompetence of socialist economics ( and some regard for culture one has to admit) the splendid cities and buildings were not hit by the worse than tasteless developments which we saw in the west in the 1960s etc. And if one can say a good thing about the terrible Munich agreement, one result of the preventing of war between Czechoslovakia and Germany in 1938 was that there was no bomb damage to Prague and other cities and buildings.

Don't forget there were some pretty terrible developments in the communist-ruled countries behind the iron curtain, too. Most Czech towns and cities we saw had their old squares and centres intact, but occasionally you'd come across some 1960s horror slap bang in the middle. Interesting that the concert/congress hall opposite the newly restored Frauenkirche in Dresden has been left to stand. Its murals are rather fine. And it's the oldest authentic building in the square...

I was in Dresden when it was almost completely in ruins...as one old lady told me, they had been "vollige ausgebombt" But one building had been restored - the art gallery - the Zwinger. .......I wonder if the England they would have rebuilt an art gallery first?

How wonderful I had forgotten Saint-Saens what a pleasure to hear José Van Damm.

I only got to know about it on a Saint-Saens song disc, where 'Zig et zag' was sung - I think - excellently by Laurent Naouri. Quite a few other treasures on there. Though I would prefer to give Samson et Dalila a miss in the opera house, there's so much else, and even the opera has its good bits.