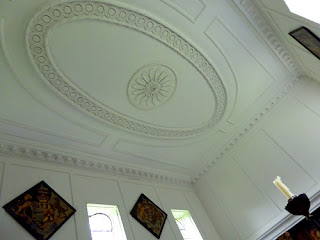 We saw it on Sunday 10 September, the day after our walk for the Norfolk Churches Trust (16 miles, 12 churches) and so although I couldn't put it on the list and claim charity for the sight, it still gets underlined in pencil in my Pevsner guide to North-East Norfolk and Norwich. And it's unique, to be sure - more of a Stourhead-style classical temple, hidden in the trees of the Gunton Estate close to the Wyatt-embellished house. 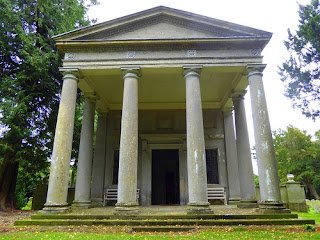 The Church of St Andrew is the work of Robert Adam, no less, in gault brick, dating from 1769. The four-column portico gives it the classical look. 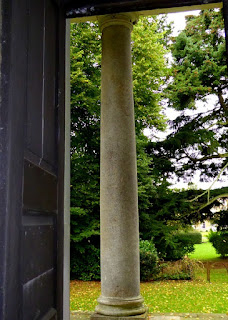 Inside, lovingly preserved and restored by the Churches Conservation Trust, the plasterwork is very fine, offset by the hatchments and coat of arms of George I, though apparently the roof is a replica of one that collapsed in the 1970s, or so says the ever-lively Simon Knott on his Norfolk churches website, and the organ means that services are still occasionally held here. 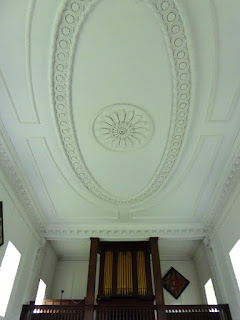 A light went on: were we to move to Southrepps, which is on the cards for the future, we could hold winter concerts here, depending on permission. Certainly the summer festival should think of casting its eye over here - though would the audience find it, and where would they park? 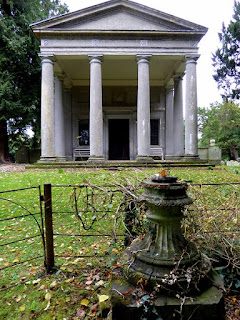 I liked the marbling in front of the altar, 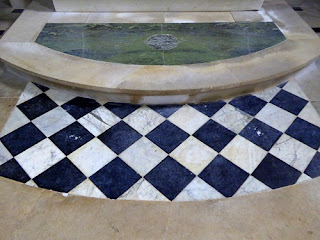 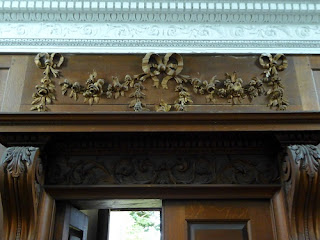 and the wall monument, to which lady I can't make out from my photo, and found nothing online about it. 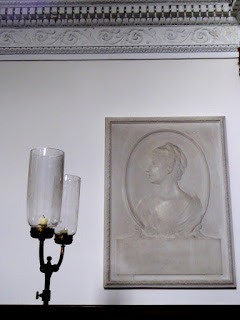 Walking around outside is a delightful experience, even on a gloomy day which was so much less tractable in its weather than the church-walking experience of sun, showers and rainbows; in fact it felt like the first day of autumn, with the leaves falling discreetly. 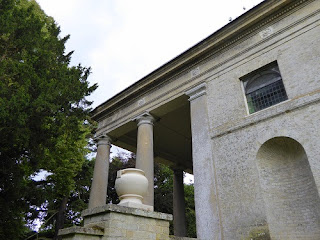 Of the rectangular shape outside, there are four niches and four upper windows on north and south sides 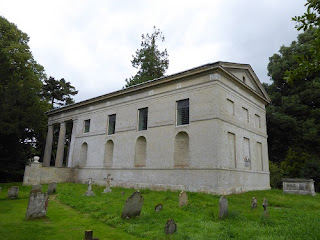 while the east end has three blank rectangular panels, on the central one of which is inscribed the date 1665. 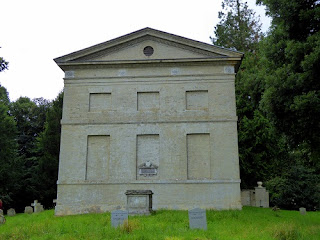 And below is the back of a gravestone for  Michael Robert Parkin (1931-2014), who spent his last years at Gunton Hall. A mover and shaker in the London art wold for three decades, he seems to have been a parp-parper in his fast cars and a born storyteller, like Grahame's Toad of Toad Hall, whose family motto - 'always toad' - is adopted as a jolly epitaph here. 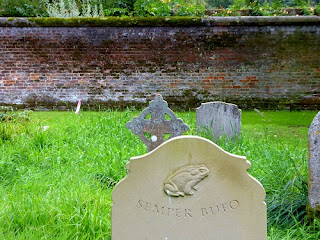 Contemporary art leaves its very surprising imprint on what looks outside like a plain flint-faced country pub in the grounds - it was from here that we made our way across the park to try and find the church. 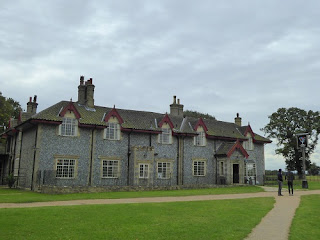 As Jay Rayner explains in his lively and positive review of the dining experience at The Gunton Arms,

the art on the walls and around the building – there is a piece by the sculptor Anthony Caro in the garden – is worth more than the building itself. At least it wears all this lightly, or as lightly as you can wear a couple of tonnes of red-painted steel by Caro. It is just a pub. With a Saatchi's worth of art...And so to the explanation: the pub is owned by art dealer Ivor Braka [who has a home in the park's folly]. He's a friend of the chef Mark Hix, long known for his involvement in the British art world. When Braka bought the pub he approached Hix for advice on what to do with it.

We were lucky to get a table, though it meant arriving around noon. That at least meant that very few people had arrived - there were only a few folk in the bar, which is clearly used by locals and not just trendies zipping up from London for the weekend, 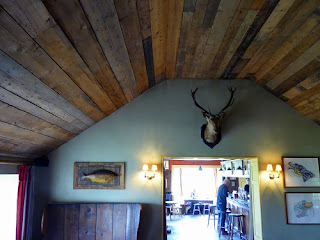 and no-one in the nookery, where I admired the Tom of Finlands 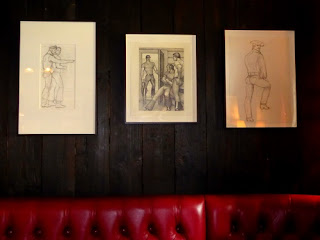 and what I'm assuming is a work by the late Howard Hodgkin - happy to be corrected if anyone knows otherwise. This is probably the artwork I'd take away with me. 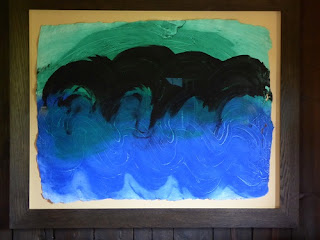 Some furious Bufton from Bungay has given the place one star on Trip Advisor for (and I quote without tidying up) its 'revolting images of vomiting - defecating ladies and that is just the dining rooms. Elsewhere there are images of spread legged femails and porographic fornication. Photographs of masturbating ladies hang in the gents toilet. It is all too much - we shall not return'. Paula Rego is responsible for the 'vomiting - defecating ladies', very stylishly drawn, and 'spread legged femails' are down to Tracey Emin - we were dining in 'her' room and that one, perhaps, was a little off-putting, though at least I wasn't facing it. 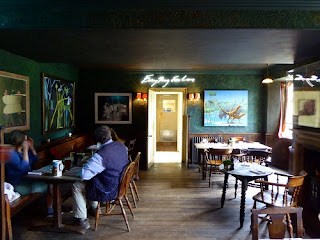 In fact the two of us with our backs to the wall got an amusing cyclorama of a herd of deer galloping past one way, and coming back another - it all felt quite surreal. 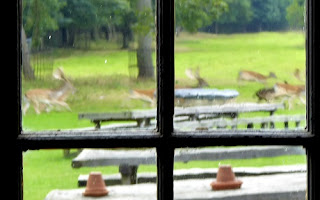 The food, though, was delicious. And I felt I could break my semi-vegetarian rules, post-Okja, to taste the venison. Later the place filled up with interesting folk and their dogs (welcome, and very quiet). So despite the gloom it was a fun afternoon, and a quietish contrast to the rigours and pleasures of the previous day.

As for the walk, we've handed our takings over to Jill to give to Mary Heather of All Saints Burnham Thorpe and should be able to announce the figure (well into the thousands, thank you very much) quite soon.
Posted by David at 15:15

What a beautiful building. But looking at your pictures of it, and comparing this architecture with the ancient churches on your walks, I can understand why the Victorians took the view that Gothic was the Christian architecture. There is in the Georgian / Palladian approach the confidence of the Renaissance, that in Alberti's words, Man is the Master of all things. Also the Gothic actually points to the sky

Very good point. And that would also imply that the classical celebrates man too - the Greeks and Romans.

I'm intrigued that Southrepps remains "on the cards" for you both for future. As I think I've mentioned, J's brother lives in Sheringham, and of course Jackie & Gill have a house in Kelling (don't know distances, but J says Sheringham, at least, is not far from Southrepps). Anyway, the church seems very appealing as a concert space. (And I'm with you that the painting you'd like to take home looks like a Hodgkin.)

Yes, Sheringham is just along the coast from Cromer, and Sheringham Park - as you will have noted from a pre-churches-walk entry - would be a constant delight, one of the most extraordinary stretches of near-coast and coastline. Another plus would be visits from you, though I don't know how far into the future we're talking - would be good to keep a one-bedroom pied-a-terre in London.

One main reason why I'd like to spend longer in a little patch of country is reading more superb nature-writing, and what is so far the greatest of them all in my experience, J A Baker's The Peregrine. He lived his entire life in Chelmsford and his walks took him along the Blackwater Estuary and yet, as he wrote, he tried to convey the wonder 'of a land...to me as profuse and glorious as Africa' (OK, Africa's a continent, but you get the point). Nearly finished, reeling.

What a shame we didn't know you were going there. Our friend Gavin Turner, conductor of The William Byrd Choir (active in London in the seventies and eighties, has an apartment in the house. He puts on an annual choral evensong in the Adam chapel with former members of the choir, including people like Michael Chance. He wasn't in residence the last time we were there, but we were with a friend of Michael Parkin, whom we met, though failed to buy the illustrations he was trying to shift. I forget what they were, but I daresay Deborah will remember. Your 'Hodgkin' is very similar to Hodgkin's 'Surf', mentioned by another bloggard here: http://tomatoesfromcanada.blogspot.co.uk/2015/03/aga-khan-museum-toronto.html.

Small world, Andrew - admittedly the musical one often connects, but this really is in the middle of nowhere. Less surprising is the artistic connection. And yes, thank you, it really must be a Hodgkin. Obvious, really.

Hope we can come to your next event; and see you before that, maybe, depending on what arises first.

If you're in striking distance of Mayfair on Thursday lunchtime to try to come to hear Rachel Ambrose Evans at the Music Room at Grays - said to be the next Emma Kirkby. You'll meet the current one too, as she intends to be in the audience. Failing that, Mark Bonney on 9 November is another voice to listen out for. A wonderful high tenor from San Francisco, he sang the title role in Handel's Jephtha at Iford this summer and again in a spellbinding concert performance in Bath on Friday.

Thursday is mother's day, unfortunately - the once-a-month visit. I hope to make the tenors, though - and I've circulated your flyer to my round-robin list of students.