Last Thursday I only just had time to pop in to the Estonian Embassy in South Kensington for the launch of Kaupo Kikkas's Treescape exhibition - or rather half of it, since the whole couldn't be housed in the two rooms. Here he is in the centre surrounded by Estonian friends and friends of Estonia (I am, ostensibly nerdily but rather more tongue-in-cheek, displaying my Pärnu Festival bag): 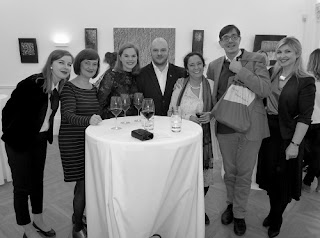 And then I hopped on my bike and only just made it in time for Finn Santtu-Mattias Rouvali's first concert as co-Principal Guest Conductor (with the equally superlative Jakub Hrůša) of the Philharmonia. My photo of him in his conductor's room at the Gothenburg Concert Hall back in September (and a perspective on his Sibelius Kullervo here). 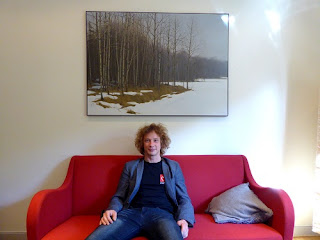 Certainly I'd put these two on the highest artistic level. Kaupo is one of the few who have you answering the perennial 'is photography art?' question with a passionate 'yes' (the contrast I would make might be with the excellent photographs taken by the Frenchman Jérémie Jung of the Kihnu women which ran at Europe House's 12-Star Gallery - superior documentation). 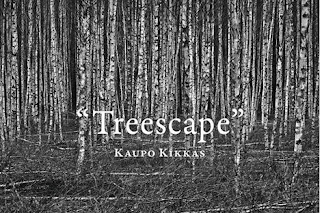 Indeed, the somewhat periphrastic description 'visual artist' fits Kaupo better than 'photographer'. He takes the best shots of classical musicians I know, but this was on a different level. I'd already seen the PDF of what should, must, be a proper book of his Estonian tree photos, but encountering them on the bright white walls of the Embassy in full symmetrical compositions - in two cases, the big image flanked by icon-like photos encased in wood - was something else altogether. 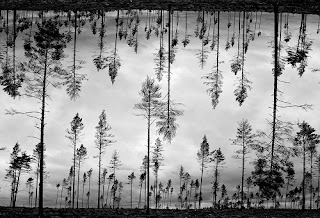 I should reproduce at least part of his accompanying mini-essay, which begins by declaring that he can find no words for what he feels about trees, saying it with a camera instead. He continues:

I am not a tree-hugger, an esoteric or particularly religious, but when I'm standing in the forest, I always get this indefinable feeling and the desire to describe it. I have been aided a lot by the writings of Hermann Hesse [see here, glorious] and Valdur Mikita, or perhaps not the texts themselves but the authors' desire to describe a feeling that cannot be described. 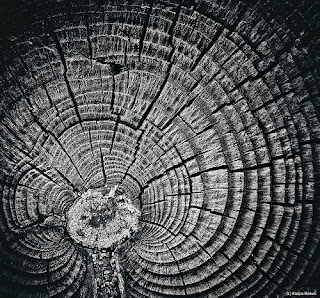 [Writing about his 'great love' of old houses and fishing sheds':] I have also used...wood in my work - in the first hundred years the tree matured, the next hundred years it spent as part of a wall and now that that building has decayed and nature has taken over again, I picked up the old wood and gave it a role in my own story.

In order to stress what is important and to remove as much of the natural environment from the picture as possible, I have chosen the classical black and white medium. The pictures have a lot of texture and patterned dynamics accompanied with several double exposures. 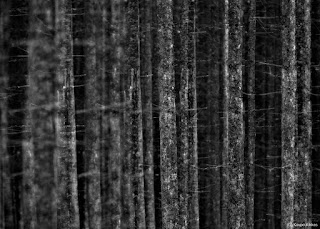 So far I can only gloze superficially - I need to go back and see the pictures without the social context in which I half-glimpsed them last week. But I do know that this chimes with my own tree-love, the reading of Mabey, Deakin, MacFarlane, Picton-Turbervill the Younger et al. Anyway, here below are two of my favourite women, multitaskers extraordinaires but first and foremost a bassoonist and a pianist, Tea Tuhkur and Sophia Rahman, at the table nearest to the camera listening to Kaupo's speech last week. The wonderful Kersti Kirs just behind them; many of the other folk I don't know. 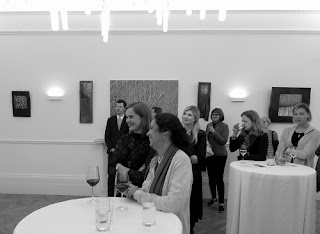 Rouvali's Thursday territory, on the other hand, was almost too known, with the exception of Kabalevsky's Colas Breugnon Overture, an opening glass of champagne which has the right to be called the Soviet Candide or Till Eulenspiegel and which I know from recordings but had never heard in the concert hall before. Rachmaninov's Paganini Rhapsody had much more interest in the orchestra - the typical Rouvali skill of suspending a phrase in mid-air captured by the cor anglais at the end of the variation just before the first appearance of the Dies Irae - than in Denis Kozhukhin's clear but deadpan delivery: no fantasy or flight there. 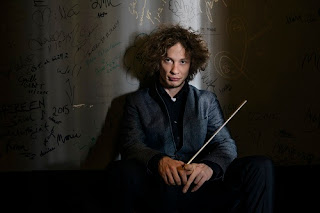 What was most exciting wasn't so much the superb performance of the Musorgsky/Ravel Pictures at an Exhibition but the way it brought the many teenage school or undergraduate groups in the hall to their feet the minute 'The Great Gate of Kiev' had finished resounding. Rouvali (pictured above by another KK, a Finnish compatriot of Rouvali, I guess, Kaapo Kamu) is one of those conductors, like Jurowski, where what you see is what you get. His hand gestures are both beautiful - especially the circular movements - and meaningful; the rest of him dances. No wonder 'Tuileries' and 'The Ballet of the Unhatched Chicks' scintillated. And this seemed like a different Philharmonia string group from the impassive lot which went along with Salonen's faceless Sibelius the previous week: the unison power of 'Bydlo' and 'Samuel Goldenberg and Schmuyle' was astonishing. So yes, what was already confirmed in Gothenburg had extra impact here given a harder-to-impress London orchestra. Great things ahead.
Posted by David at 14:33

This is yet another post filled with treasures. I was taken by the tree photographs, which reminded me of another tree lover, John Nash. Today, as an aside, J & I visited Vassar’s art museum, which had a wonderful exhibit of Frankenthaler prints. This, plus a trip to our favorite local bookstore (where browsing is atill possible, the owner was present for an enjoyable chat, and I picked up three interesting-looking books) reminded me that there is still the possibility of intelligent life, which is otherwise in woefully short supply. Also, I have picked up tix to another concert, thanks to the lovely Lucy Dhegrae, who alerted me to a performance of Pergolesi’s Stabat Mater. And speaking of graceful conducting, David Bloom, who also exhibits this so well, is attending, too. I hope you have the chance to witness him at the podium one day.

Sounds like I have had a parallel experience in Edinburgh - I also bought three books in a fabulous independent bookshop near the university, revisited old haunts and spent an hour in the Meadows Pottery, choosing a couple of bowls (not something I usually do) and talking to the parents of the phenomenal Sean Shibe (you remember my mentioning him here and on The Arts Desk), Paul Tebble and Junko Shibe. Paul read me a couple of poems by the remarkable Elizabeth Burns, sadly no longer with us, with whom they shared several events. Instantly moved me, and I've been absorbing her small collection Held all the way back to London.

You know I've long wished that Contemporaneous could come to London. It's so good to hear about the progress of the composers and artists from you. And remembering how much I liked Lembit Beecher's music, I must tell you that I've been enthralled by her translation of Jaan Kross's The Ropewalker - this really is on a level with Wolf Hall - and already have the second volume ready and waiting.

And if Contemporaneous should find its way to London, I would like to be there, sitting alongside you, to get your expert "take" (though of course I will be nervous). I am also SO glad you noted The Ropewalker (and in the same breath as Mantel, no less). When I first tried to obtain the book, it wasn't yet available here. Then, in the misery of current events, I lost track. I have now calendared, on Monday, to order it from my favorite local bookstore here, and cannot wait to start in on V.I myself. And now, you whet my appetite even further for all things Estonian, as you recently did with the lovely spot in Sweden.

I so enjoyed chatting with Kaupo K about Kross - he thinks he is the greatest Estonian writer, though there's another (Tammsaare, perhaps it was) who apparently just doesn't translate since his language is very involved and strange. Kross is a page-turner as well as a deep thinker and master of complex character.