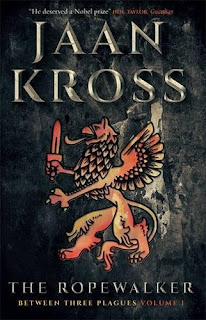 Yes, I know, publishers love to jump on the latest sensation by finding counterparts, preferably wrapped in covers that mimic the original (I could hardly believe one recent book ripping off the very entertaining if perhaps disposable Swedish hit by Jonas Jonasson, The Hundred-Year-Old Man Who Climbed Out of the Window and Disappeared). But I was grateful when Miss Smilla's Feeling for Snow spawned a translation of Kerstin Ekman's Blackwater, which led to my reading a much greater novel of hers, The Book of Hours. And I'm mighty glad that the justified hullabaloo over Hilary Mantel's unfolding Tudor chronicle led to the long-overdue appearance in English of an Estonian classic: possibly its country's greatest work, if the well-read Kaupo Kikkas is to be trusted (and trust him I do).

I actually heard about this through my beloved blogpal Susan Scheid, who's been a champion of many young American-based musicians including the unquestionably worthwhile Lembit Beecher. She told me that Lembit's Estonian mother, Merike Lepasaar Beecher, had just translated the first volume of an historical three-parter by Jaan Kross (1920-2007). I looked it up, was fascinated and ordered the hardback, coincidentally published as it turns out by our friends in the enterprising MacLehose Press, on the spot. Now the second volume, published this year, is sitting waiting, and I'm postponing the pleasure for a while, knowing I'll have to wait at least another year for the final instalment. 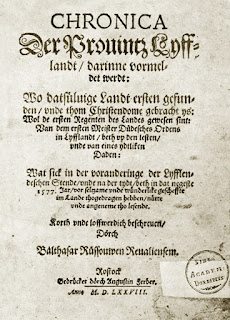 Kross's masterpiece tells the story of Balthasar Russow (c.1536-1600), about whom something but not too much is known. To quote the translator's very helpful introduction,

Russow lived in old Livonia (the territory of present-day Estonia and Latvia). He is the author of a remarkable work: the Chronicle of the Province of Livonia, in which he recounts the history of Old Livonia from 1136 to 1583. Russow wrote the Chronicle during the Livonian Wars, which spanned the years from 1558 to 1585, and this 25-year period is its focus. Old Livonia was a battleground for warring powers, with Russia, Sweden, Denmark and Poland-Lithuania scheming and battling for domination of this small corner of northern Europe. It was a terrible, turbulent time...Central to Kross's narrative is the story of how Russow's Chronicle...came to be written....Kross has described it as 'the first classic of Estonian literature'. 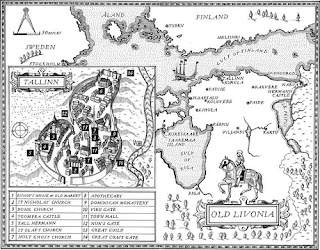 As you can imagine, it takes an exceptional imagination to bring the past to life as if it were only yesterday. And through the character of Russow, as fascinating a figure as Mantel's Thomas Cromwell if not, of course, as powerful, everything lives and breathes. Like Cromwell, he has a divided consciousness, born the son of a coachman in a village outside Tallinn but going on to acquire an impressive education, and he moves between at least two worlds. We don't often get to see him through the eyes of others, but there's a nice, typical stream-of-consciousness summary from his German brother-in-law Meus:

What strange folk these peasants are, after all...even this one here...this big-boned, rough-hewn titan with his round head...When it comes to learning, he's second in Tallinn only to the academicians, and he can get the better of some of them in matters of concrete knowledge...a philosopher, in some ways, but still a stripling in others...the way he looks at you with those wide-open blue eyes, naive and all-knowing at the same time...and he exudes something - the devil-knows-what - something like the hot steam from the sauna stoves in this region, and he's prepared to work as a coachman for the rector in Marburg or as a proofreader or a ploughman...

Kross gives clever Bal a rooting in a country expedition where he outfaces wolves, sees an old tree-god and follows his Aunt Kati's instructions to help in the birthing of a calf by getting up on a stove and bellowing like a bull:

His rational self smirked at all this, the witching made him anxious, and he worried about what Epp [the village girl who's taken his fancy] might think of his calving antics. And yet he also felt how the stove, made of stones dug out of the fields, was somehow humming along with him and with the cave-like house and the earth under the house. He would remember this moment all his life: of that he was certain even before the cow's plaintive lowing changed to a long clear moo-oo-oo. It seemed to be such a direct response to his bellow that it shocked him, for it appeared to prove that he had extended his hand over the gate and into the realm of witchcraft. 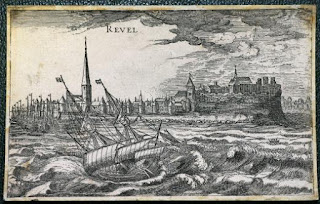 There are plenty of more extended set-pieces, starting with the pell-mell brilliance of the virtuosic first chapter, in which Bal climbs the high tower (still the highest in old Tallinn, as walks around it and indeed our wonderful summer meal over the bay revealed - see below) of St Olaf to join a group of Italian rope-walkers -  hence the title of the first volume, applied to the hero's own balancing act. 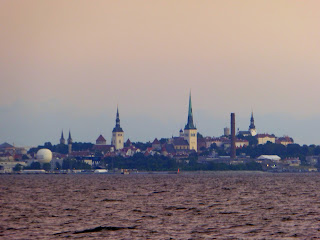 and an astonishingly evocative account of his night journey over the frozen Baltic to Finland to deliver a message to Crown Prince Johan of Sweden. As for Bal's character, it is often stripped bare - the world for the young man seems to consist of 'only two categories of people...There were those whom he envied - whether the envy was strong or vague, there was no denying it. And there were those whom he pitied - whether the pity was deep or superficial, there was no denying that, either'.

The historical circumstances of Kross's own life help to give the picture of the past incredible potency, too. He had suffered, like most of the Estonian intelligentsia, from the German and then the Soviet occupation of Estonia - arrested by the Nazis in 1944 as a promoter of independence, then imprisoned by the NKVD in 1946 and sent for eight years to the Vorkuta Gulag and to work in the Inta mines, two more to eke out his time as a deportee. He became a writer on returning to his homeland in 1954 because his early legal studies were null and void under the Soviets. 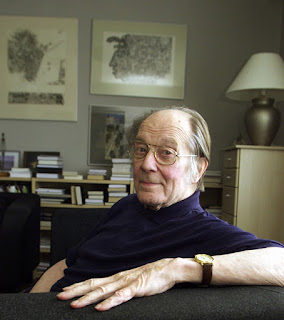 Debating with his wife, the poet Ellen Niit, what could and could not be written in the 1960s, the time of the Khrushchev thaw, they drew two circles - one of what should be written, the other of what could be. The area of overlap still left them with quite a lot to write about. 'History would allow me to write obliquely of the present and play with paradox and ambiguity', evading the censors by doing half of their work himself. He tried, he said, to write about the 16th century, 'its intellectual atmosphere and conditions in a way that some kind of parallels with the present would shine through...though nothing too stark or obvious'. In this he succeeded magnificently, and reading this translation today, we find his vivid imagination untrammelled and in need of no apology

What an exciting discovery. Thank you for sharing. I often wonder what other gems await translation. I see the third volume of Solzhenitsyn's Red Wheel is making it to English this year, though I'm not sure if that'll be a page-turner.

Right, that settles it. I tried to get the book here from my favorite bookseller, but it is still not available in the US. I haven’t wanted to read it in the Kindle version (which is now available here), but what you write makes clear that I must. It is always interesting, too, to think of the translator’s art when reading a really good book (and in this case a trilogy, no less). I’m hoping there may be a chance someday (most likely in the context of a concert featuring Lembit’s music) to hear from Merike directly about her work on this. I am, of course, extremely pleased, particularly with all the music and reading and film tips you’ve passed on to me to be able to return the favor.

Do you resist Amazon totally, Sue? Surely you can buy the hardback Vol 1 and Vol 2 in paperback (it wasn't, sadly, printed in the handsome edition that graced the first instalment) there. Sadly MacLehose Press doesn't sell direct, it seems. My contact there told me that Merike isn't too well at the moment and they were going to cheer her up with the news. Maybe you could get in touch with her to see how she is? History will forever be grateful to her for this.

And yes, Andrew, exciting is the word - I wish The Ropewalker had made a bigger splash. I have a shortlist of books I wish would be translated, headed by Sofia Posmysz's The Passenger, which of course was the basis for Weinberg's interesting if flawed novel about an Auschwitz survivor meeting her captor years later.

I have been in touch with both Lembit and Merike and also sent Merike a link to this post. Only the Kindle, and only v.1 so far, is available here, alas. I started in on it yesterday and am enjoying it very much.

Thank you, Sue, and say 'tere' to our noble Estonians from me if you have a further exchange. The hardback is so handsomely produced, with the map I illustrate as endpapers, that it's well worth buying - even if that format isn't to be continued with Vs 2 and 3. You can buy 2 on Amazon. I'm postponing the pleasure for a bit since I know I'll have to wait nearly another year for 3.

You can't fail to be swept up in the giddying detail of that brilliant opening chapter in the tower of St Olav.