Ever upwards with Bach and Dante

You can see I'm in danger of being left behind on terra firma in both my big pursuits of the year, with four out of seven Bach cantatas to catch up on here - I'll deal with the other three alongside next today's in a future post - and four Dante lectures to comment upon, of which I missed one. Nevertheless I'll make some effort to be light and airy like the masters.

It seems I was premature in leaving Purgatorio behind in my previous Dante/Bach post: there turned out to be one more Warburg Institute class on the middle cantica. The most treasurable utterance, of many, that I took away from Professor Took, of many, was a very helpful summary of the Dantean essence in response to one of the questions in the discussion: 'Peope's lives are mixed, ambiguous in the extreme, simultaneously in hell, purgatory and paradise. In order to explore [the issue], he divides it out. The moment of truth lies somewhere in the unutterable complexity of the here and now'. 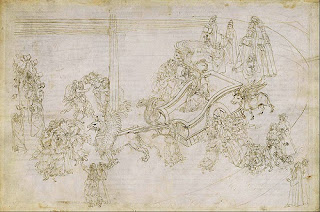 Even so, Dr Scafi prepared us for 'a difficult and allegorical Canto' (33, the last, of Purgatorio) in the shape of the final processional which represents the triumph of the church (sketched above by Botticelli, no less), complete with the four cardinal virtues, three theological virtues and Beast of the Apocalypse. The difficulties pale into insignificance once we reach Paradiso. Dante warns the slackers among us - and there must be many more now than in that religiously obsessive age - at the beginning of Canto 2 (with acknowledgment to Robert W Durling's literal translation):

O you who in little barks, desirous of listening, have followed after my ship that sails onward singing, turn back to see your shores again, do not put out on the deep sea, for perhaps, losing me, you would be lost; the waters that I enter have never before been crossed; Minerva inspires and Apollo leads me, and nine Muses point out to me the Bears.

Despite the comfort of mythological and classical signposts, the Christian theology, albeit that Dante has such a singular take on much of it, is what makes so many of Beatrice's homilies rather hard for the contemporary reader. So is the assurance of a now outdated cosmology; it can't all be taken as poetic metaphor, after all. Nevertheless, the guidance of our Warburg Dante and Virgil (who has long disappeared from the scene in the Divina Commedia, of course), and the thoroughness of the notes to the Durling edition (of which the Paradiso volume runs to 873 pages) make the most difficult journey worthwhile.

The best of our two most recent classes, for me, has been in the discussions. I'm getting antsy: why should Piccarda Donati and the empress Constanza be in the lowest sphere, the moon, in Canto 3 (pictured above), simply because men snatched them out of their nunneries and forced them into unspeakable wedlock? And why does the narrative of Dante's Thomas Aquinas about St Francis seem so hard and charmless to us, expecting at least something of the goodly saint's conversation with nature?

Dante's Beatrice provides part of the answer when it comes to the two paradisical ladies in Canto 4: they merely appear in the moon, and actually adorn the first sphere, the Empyrean. It's a matter of conscience. Well, that's half satisfactory. And Prof. Took thinks that the narrator Dante is playing the serpent when he asks them if they don't desire a higher place. Smiling and joyful Piccarda replies that 'it is constitutive of this blessed to stay within God's will, and thus .our very wills become one' ('Anzi e formale ad esto beato esse/tenersi dentro a la divina voglia/per ch'una fansi nostre voglie stesse', 3.79-81).

As for Francis, the harshness is to do, as Prof. Took put it, with Dante's 'stringent selectivity' - he has an axe to grind with the Dominicans and their tendency towards luxury in opposition to the Franciscans, led by a man who took Poverty as his Bride. He's 'too angry', has 'too much of an agenda' to spend time on the birds and the beasts.

Bach doesn't always do the expected thing, either, though his line of communication is always direct thanks to the expressive power of music. His first Ascension cantata for Leipzig, 'Wer da gläubert und getauft wird' comes not with trumpets and drums but an exquisite halo of two oboi d'amore, a short if uplifting opening chorus and an affirmative tenor aria with ardent violin obbligato. Loveliest is the chorale for soprano and mezzo in imitation with dancing continuo support, as Brides of Christ complete with joyous 'eia's- irresistible when Rilling's soloists here are Arleen Auger and Carolyn Watkinson. 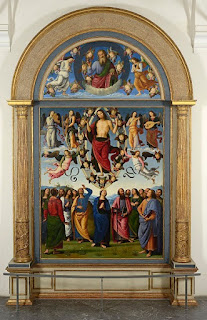 That fine alto distinguishes BWV 44, 'Sie werden euch in den Bann tun', with a superb aria alongside oboe and bassoon. The opening is surprising: two parts of the text run respectively as a duet for tenor and bass and a harmonically wayward chorus in faster tempo. The chorale for tenor here has a distinctly weird, chromatic accompaniment from bassoon, there are fabulous adventures from the bass line in the virtuoso soprano aria, verging on the Handelian, and the closing chorale is familiar from its similar setting in the Matthew Passion.

BWV 172, 'Erschallet, ihr Lieder, erklinget, ihr Saiten!' for Whitsunday, is much more what one might expect for Ascension. It comes as no surprise to learn that its three celebratory trumpets, which go virtuoso-crazy in the bass aria (a good, if short alternative to Handel's 'The Trumpet Shall Sound'), were originally meant for a secular celebration, but they suit the celestial setting of the Weimar chapel (pictured below, no longer extant, alas) for which they were destined in 1714. The tenor aria offers some room for reflection, and a presumably deliberate harping on minor seconds in the 'weh' of 'wehet'. 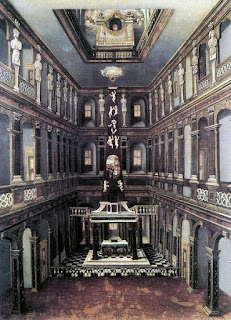 Intimacy is apt for the Whitsun Monday and Tuesday cantatas, both of which begin with charming recitatives. BWV 173, 'Erhöhtes Fleisch und Blut", is another cantata adapted from a profane congratulatory set. It haas a radiant beginning (plus a non-chorale final number, unusual but not unique among the cantatas) and a lilting 6/8 tenor aria (beautifully sung on the Rilling set by his regular, Adalbert Kraus) with flute doubling first violin line to strong effect. The most original number, in which each of three verses, first for bass, then soprano, then the two together, is treated with increasing elaboration, is ruined by the only inadequate soprano I've heard on the Rilling set so far; let's hope she's a one-off.

BWV 175, 'Er rufet seinen Schafen mit Namen' captures the good-shepherd pastoral aspect with three recorders - and we're back to excellent soloists - Watkinson, Schreier, Huttenlocher - exchanged for two very florid trumpets before the finale choral reverts to the original colouring. Last night, in the only one of the three Gardiner cantata sequences I was able to catch over the Bach weekend at the Barbican, there was equal rustic beauty in the perfect correspondence between countertenor Reginald Mobley and Rachel Beckett and Christine Garratt on two transverse flautes for the aria 'Wohl euch, ihr auserwählten Seelen' in BWV 20. But I feel that's all I can write on the evening's cornucopia of riches for now, lest you feel drowned in BWV numbers. More anon.
Posted by David at 11:03