Marching for togetherness, with optimism 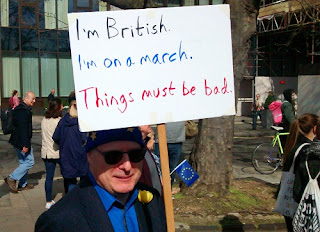 I've never been on such a good-natured processional (in fact I haven't been on nearly enough protests in my lifetime, but I'm beginning to catch up). You could argue this one was about many things: a celebration of 60 years of peace in most of Europe, on a significant birthday for the EU; about remembering what happened close to the end of the route on Wednesday, and showing what the undaunted spirit of those who came from all round the country for the occasion is all about; certainly about our anger at the Brexit railroading of May and Co, with attendant ingenuity in the more indignant banners. But one thing's for sure - our experience of it was wholly positive, including the delight in walking the closed-off thoroughfares of the West End. 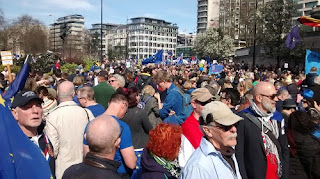 We were lucky to turn up at Hyde Park Corner about 40 minutes after the official start; nothing had moved, and we were ushered to what turned out to be the front of the march. All these pics were taken on J's phone, as my beloved camera had crashed to the ground while I was trying to photograph Bunyan's tomb a couple of weeks ago, and is in for an expensive repair to the zoom lens.

And so round into Piccadilly 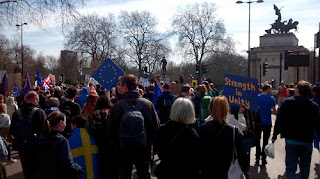 where the rise gave a good view backwards 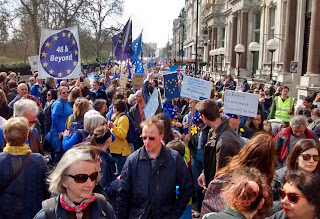 and down towards St James's Palace, where a good shot of J in his yellow waistcoat can't be used here, alas, though this one of three ladies will do, 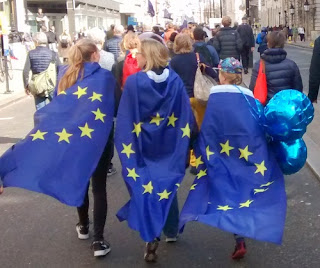 then along to Trafalgar Square. We hadn't been able to meet up with my goddog Ted and his owners, who as it turned out had gone home after waiting for an hour and a half at the start, but it was good to see so many canines present or represented - note the banners to the left, including 'this cavapoo is pro-EU'. 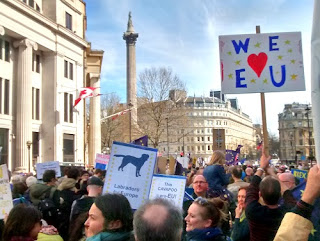 Funny how few folk we met whom we knew - just a couple we'd become acquainted with last Saturday over Ted's owners' first 'Shakshuka Club' lunch, just after this heading into Whitehall 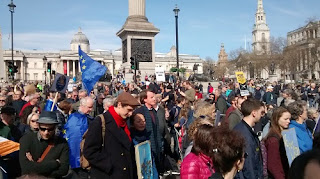 where although the space for walking became much more generous, we could still see the procession behind stretching back as far as the eye could see, and led by this most vocal of groups 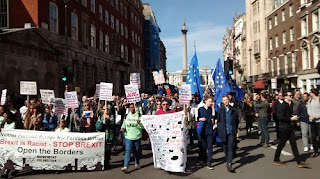 and forward to Parliament Square, 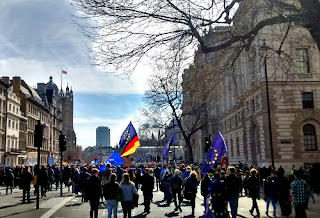 where, securing a place on a traffic island rather than in the Square itself, we heard a policeman saying that the tail-end of the march was only just leaving Hyde Park Corner. And oh, the hosts of golden daffodils, such a nice touch on a glorious spring day. 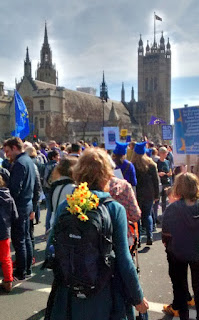 Couldn't hear the speeches, starting with Alastair Campbell, and from memory of the last lot, they didn't promise to be too inspiring - and very short on the diversity/women front - though Nick Clegg, by all accounts, did a good job. In any case, we had to head off to the National Film Theatre cafe to meet our friends Nats and Danni, who'd come up specially from Bournemouth. Glorious to sit in the sun; happy thereafter and in one's sleep to thrive on the memories of a togetherness which will survive whatever happens next. Estimates of attendance range between 100,000 and 500,000: not bad. We are Europeans first, citizens of the world second, Brits third, and nothing's going to change that. Fingers crossed for the French and German elections - it's looking hopeful.

29/03 The Day of Wrath is here. What better to counter the sending of Article 50 than this magnificent one and a half minutes of what Europe stands for?

I do wish there was a "like" button on Blog Spot. Love that sign in the first photo.

Your words are more welcome, Will. 'Likes' are all too easy - I really dislike them (though I'm not above the odd 'like' on LinkedIn, which is all I do by way of social media, I'd far rather leave a comment).

This is marvelous, David, and heartening. Of course I love the sign you show first, but really, every photograph, along with your words, demonstrates where hope lies--and that it continues to exist. In solidarity.

That's exactly it, Sue, as you know from the Women's March in NY. People ask whether demonstrations achieve anything, and the answer has to be, they do, regardless of whether governments listen or not. They are remembered - the Iraq march in London, especially - and they remind us that hundreds of thousands of others think and feel alike. If the barriers go up again, we will cross them.

Well, Saturday rocked - but gently, more elegiac than expletive. And, echoing what you wrote in your email, Esteban González Pons is a new hero for us Europeans.