ENO Pirates sail on in style 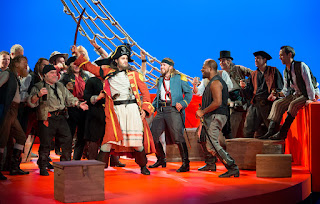 Never understood those detractors who claim Mike Leigh didn't do enough with Gilbert and Sullivan's first out-and-out masterpiece, The Pirates of Penzance, which I loved on its first appearance at ENO two years ago. Indeed, he taught me that it might, after all, be the best, despite some bigger ambitions in parts of Iolanthe, The Yeomen of the Guard and Princess Ida. Less is more in G&S: get the singer-actors to deliver its topsy-turveyness straight, and the fantastical wit will only seem the stronger.

True, there's some campery, but of the innocent sort: the Pirate King and above all the Major General (Andrew Shore, peerless both times round, pictured with Ashley Riches' Pirate King and chorus above in the first of many production images by Tom Bowles) are big kids who love to romp with, respectively, fellow noblemen-gone-wrong and daughters. The mesh of adaptable set and handsome period costumes seems just as clever second time round (everyone loves the Policemen peeking out around the circle-frame). 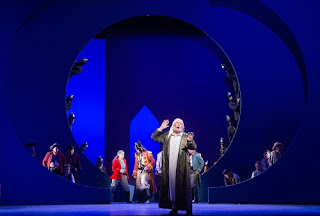 I went again partly to introduce the youngest godchild by some distance, seven-year-old Mirabel - the rest are now in their early twenties - to the delights of G&S. She seemed gripped throughout, but what she liked I don't know, because she's gone into a shy zone, head buried in books at tea afterwards (which is delightful in itself, especially as they're not of the electronic variety). But her parents and I adored it - indeed, mum Edsy, who's now a fan of Charles Court Opera's bracing reimaginings, constantly reels at the subversiveness of it all. Like so many folk, she'd thought the Savoy Operas were the provenance of polite home-counties am-dram, whereas when done at the highest level they provide the greatest sheer pleasure of which music theatre is capable. 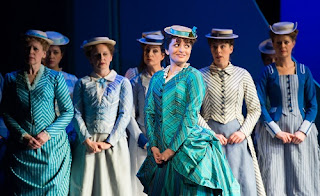 The many newcomers to the cast were all impressive. I wondered if any Mabel could be as delicious and vocally impressive as Claudia Boyle first time round; welcome Soraya Mafi from Lancashire, a coloratura of high style and engaging stage presence (pictured above). 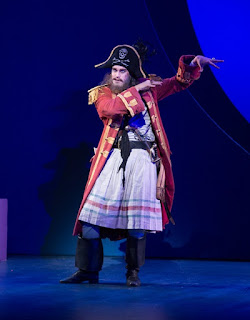 Ashley Riches brings opulent musical skills to bear on the Johnny Deppesque Pirate King, phrasing in long lines (what a classy singer he is). And I want one of them pirate skirts. 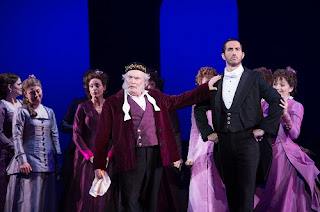 There's promise, too, from tenor David Webb as a Frederic more worthy of those girls' gushing about 'manly beauty' than the excellent Robert Murray. And John Tomlinson is nothing diminished as Chief Plod, doing subtle things with the famous song. Conductor Gareth Jones made a real impression with the ENO Orchestra in the Overture, and kept it all on the boil more skilfully than most audience members will have realised. The chorus actually gets its due for once this season; why do I forget until it arrives that 'Hail, Poetry' is such an a cappella stunner, the centrepiece of an Act 1 Finale that otherwise doesn't do much dramatically (think Katisha's entrance, the Fairy Queen's 'curse', to name but two)? 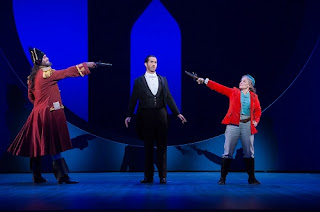 The one improvement on last time is Lucy Schaufer (pictured above with Riches and Webb), musical theatre pro who always knows the right buttons to press, as a Ruth with a very impressive chest-voice-taken-high and an unflinching delivery of west country vowels and consonants. As I've made her acquaintance, I suggested to Edsy that Mirabel might like to go to the Stage Door accompanied by the skull-and-crossbones-touting bear on loan from her school - truculent elephant Mr Panz, who sings G&S style songs already, had to stay at home - to meet her. 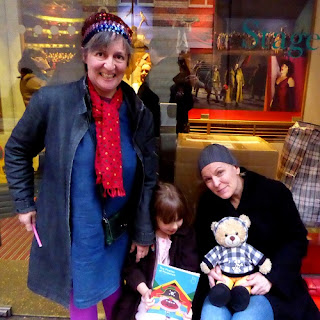 Mum was possibly more thrilled, childlike-fashion, at this proposal than daughter, but back we went, and Lucy was swiftly out, absolutely charming in sitting down and signing the programme before going off for a massage between shows (she's wearing the hat, by the way, to keep her hair flat between wig-sportings). We also got to meet Ms Mafi and young Webb, who of course were models of natural friendliness, as I told the family most British singers are in my experience. 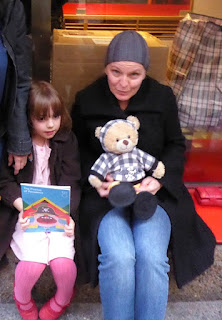 Then it was off to Maison Bertaux for tea and cakes. A pretty good afternoon out, I'd say. If you want to revisit My Evening With Mike Leigh, in the pre-performance talk we shared back in 2015, you can find it on Soundcloud here.
Posted by David at 12:18

My first encounter with P of P was a high school production which brings in images of "home-counties am-dram" that your friend Edsy imagined. The next time was the American Savoyards - a New York based company that brought productions to a summer theatre when I was in my teens. It was D'Oyle Carte in what I can only think was the good-old bad-old traditional style. But what made me realize that G and S were a series of beautiufully staged, designed and sung productions by our Stratford Company - a series that had been initiated by Tyrone Gutherie directing Pinafore and P of P. That and the incredible 1929 recording with George Baker, Peter Dawson, Elsie Griffin et al conducted by Malcolm Sargent. If ever proof was needed of what was need vocally in that remarkable score then that recording would be exhibit #1 in my opinion.

I grew up on Village Institute productions, then being taken by our neighbours to see the D'Oyly Carte at Sadlers Wells in just about everything (including Utopia, though Grand Duke was done by local Cheam Operatic who brought out the first recording on Pearl). And I was Sir Joseph Porter aged 11, which I may have mentioned too many times on this blog.

Hate to contradict you but do you mean Baker and Elsie Morison with Sargent from the 1950s? Happy to be put right if not. I think the best of the D'Oyly Cartes is Pirates with Valerie Masterson, Philip Potter, Reed, Donald Adams and Owen Brannigan (also on the Sargent Pirates). Then the Mackerras ones sans dialogue are very good.

When G&S were in full flood the musical establishment was quite clear - how could the composer of The Lost Chord lower himself to these comic trivia? We can now see that The Lost Chord exemplifies perfectly the sentimental self indulgence which we find pretty sickening in the Victorians and indeed is objectively a damning aspect of their understanding of the world. And G&S is now in the principal repertoires

The timelessness of Gilbert's language in the truly comic operas is a wonder; and of course Sullivan's music fits the lyrics in speech melody as memorable as Gershwin's or Cole Porter's. As soon as a note of archaism creeps in, as in Yeomen and Princess Ida, it's less funny and seems more dated, wonderful as the plotting and the musical number still are. I have Ivanhoes sitting her, the 'serious' opera Sullivan always wanted to write. Must give it a go. But it does strike me how often the depths are sounded in the Savoy operas at just the right time - the duet between Frederic and Mabel, for instance, or the meeting of the Lord Chancellor and Iolanthe.

When House of Lords reform was seriously under discussion ( Lord Cranborne et al - and a rather good outcome they achieved, on the whole) I tried through the Deputy Chair of the ENO to get them to put on Iolanthe [" But if the House of Lords is to be composed entirely of people of intellect, what's to become of the House of Commons ?" - "I never thought of that" ......absolutely on the point] but the idea was not taken up.

Last Saturday there was a slight ripple of applause (in which I joined) at 'Because, with all our faults, we love our House of Peers'. ENO is, I think, down to 'do' Iolanthe next season.