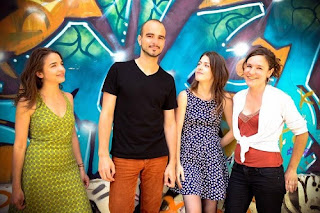 Classy cellist Lydia Shelley's mum Mary Hill, a very fine pianist and good friend via J's time with her when she ran the Abbey Opera course, encouraged us to come to her (Lydia's) current quartet's first UK concert at a packed Wigmore Coffee Morning (yes, they still serve sherry). We both remember Lydia - second from the right above, I'll introduce the other players later - as a bairn and are mighty proud of her. Mary pictured below smiling, also second from right, with Lydia's cello case in the foreground at the gathering afterwards, because I fear she's a tad out of focus in the otherwise better shot further down. 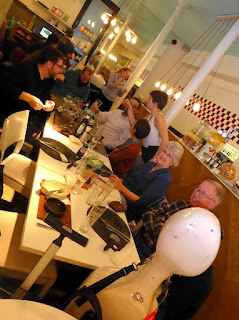 Quatuor Voce (both publicity shots, I think, by Sophie Pawlak) is as good as it gets in the quartet world, reminding me how anyone who attends chamber music festivals around the world knows that there are so many first-rate quartets whose names deserve to be as well known as those of the chosen few. QV is the complete package - wonderfully blended, subtly responsive to each other in a way that's a pleasure to watch (and the fact they happen to be good-looking doesn't do any harm) and full of insights which made me hear a Beethoven quartet I thought I knew quite well in a fresh light. 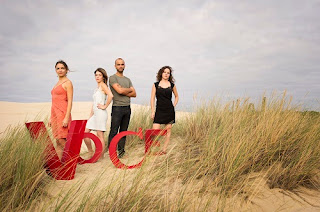 In fact most of what they revealed is there in the score of Op. 18 No. 6, but I've not often heard it reproduced so faithfully, nor with a freshness that made one feel the shock of the new not just the famous convolutions of the 'Malinconia' Adagio but also in the way the slow movement's minor-key sequence seems about to start up again a second time, but turns radiantly to the major, only to get cut short, and in the deliciously lopsided Scherzo's four bars of minor surprise on the way back from the trio. Other than that, all the little dialogues and original figurations were etched in with such refinement, grace and (where appropriate) humour. You couldn't ask for more. 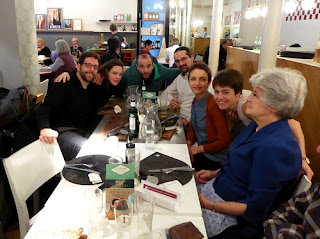 Needless to say, more audience members found Bartók's First Quartet - also on their new CD, which I have to get - the most engaging of the two on the programme. I have to say its direction is sometimes opaque, none the less fascinating for all that but quite hard work on a Sunday morning. The QV took on, appropriately, a completely different identity, though still with the same built-in subtlety, and stunned in the whirling dance music. Quite a seventh-day work out. When I met them in the restaurant along the road to which we'd retired, I told the quartet members (pictured above, violinist Cécile Roubin second from left, viola-player Guillaume Becker centre, violinist Sarah Dayan two along to the right, Lydia between Sarah and her - Lydia's - ma) that I want them back for all the Beethoven and Bartók quartets. And of course I meant it. Over to you, Wigmore Hall.
Posted by David at 15:32