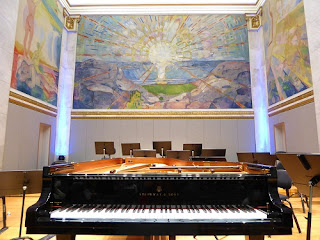 Well, not exactly Munch's: the Aula of Oslo University, built in 1911 for the establishment's centenary, is in a rather conservative neoclassical style, the central part of the old campus at the north-west end of the city's main drag, Karl Johans Gate. Munch transformed it into something else, a pagan edifice with the sun as its god (the Sarastro scenes of Mozart's The Magic Flute would fit even more perfectly in here than in the main assembly room of Freemasons' Hall in Covent Garden). Thus I beheld the exterior on the sunny but very cold morning after the first concert I've heard there, the Norwegian Chamber Orchestra's Mozart sandwich with Leif Ove Andsnes directing two of the greatest piano concertos, K466 in D minor and K487 in E flat major, from the piano. 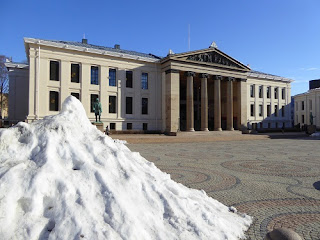 Somehow Munch's ambitious scheme of 11 oil paintings accords with the main hall perfectly. Needless to say, the abundance of young nakedness didn't go down too well among the greybeards of the university after the competition which Munch won. But he was in no mood for sobriety in his new-found confidence after leaving the Copenhagen clinic where he was treated for mental illness in 1908-9. The pictures were eventually installed in 1916. As I mentioned in the Arts Desk piece about the concert, I knew of the existence of the amazing sun from the cover of a sumptuous Philips boxed set featuring Ozawa's Boston recording of Schoenberg's Gurrelieder. And here it is, up close, shedding its rays on a recognisably Norwegian stretch of coast, complete with rocky islets. 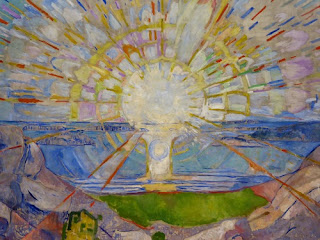 It glints at you from a distance as you walk through the coffered antechamber. 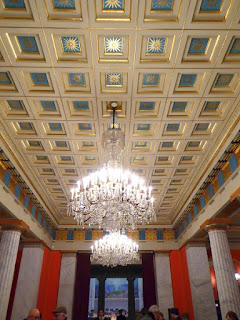 As you approach the last of the pillars, a triptych is revealed, 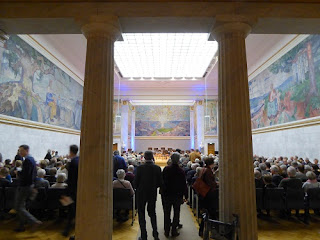 with, on the left wall, a long panel symbolising 'History' with an old man reading to a young boy, 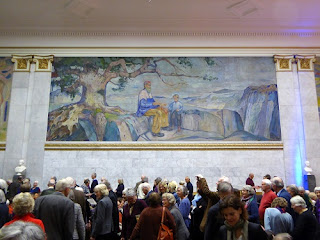 and, on the right, a rather less successful execution of a woman breastfeeding and raising a family, as 'Alma Mater'. 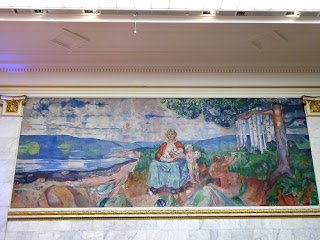 This entry from the University gives you a 360 degree view, with titles for all 11 paintings. That helps me identify, to the left of the sun here and moving away from it, 'Awakening Men in the Lightstream', 'Women Turned Towards the Sun' and 'New Rays'. 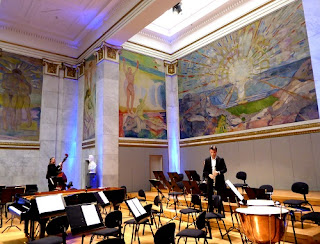 On the right here is 'Men Turned Towards the Sun' 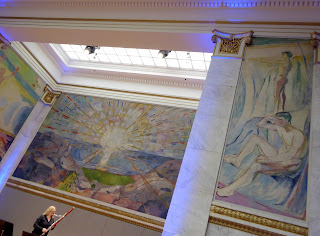 and, looking past the Mozart scores on the stands here, 'Harvesting Women'. 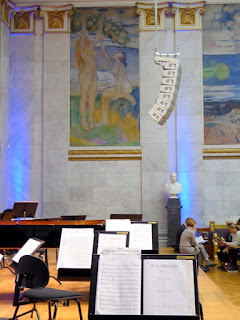 After the concert, out onto the campus 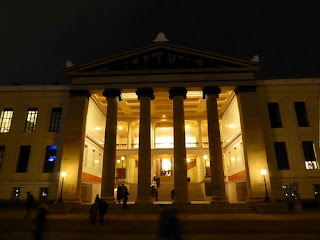 and so to bed. Earlyish to rise, to make the most of my full day before the flight back to London the following evening. I had either side of an interview with NCO leader/motivator-in-chief Terje Tønnesen in the NCO offices at lunchtime, so first I retraced familiar steps, examining the Holberg statue group at the side of the National Theatre, seen here from behind looking towards the Aula, 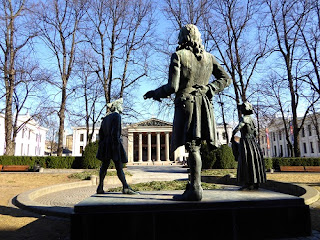 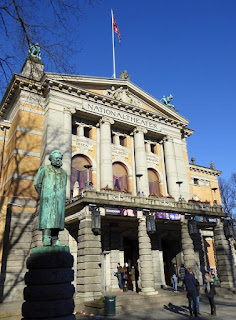 and then walked around the magnificently detailed, essentially 1930s City Hall, which I went inside on a first visit to Oslo, 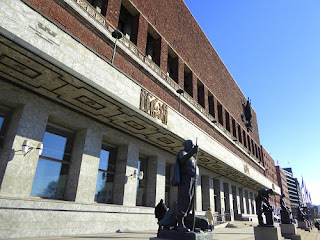 down to the central harbour - the statues, I'm assuming since I can't find the information anywhere, are by the ubiquitous Gustav Vigeland - 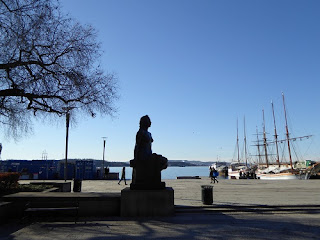 and up steps past a statue of Roosevelt, erected in 1950 in gratitude for America's help to Norway during and after World War 2,  currently missing his nose (it should be replaced, properly restored, in the summer) 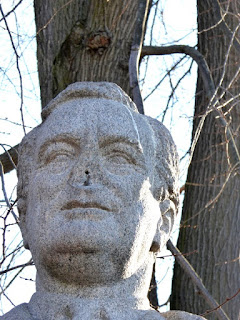 to the Akershus Fortress, 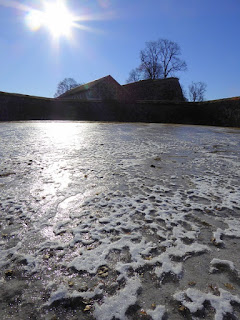 the heart of old Christiania as transformed from its medieval origins by Christian IV. 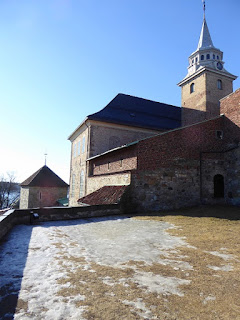 Last spent time here in heavy snow, which made everything as silent as the grave. Now, in the sunshine, quite a few tourists were out and about, while the soldiers carried on their duties between chats (having two together and a third posted elsewhere makes it a bit sociable, at least). 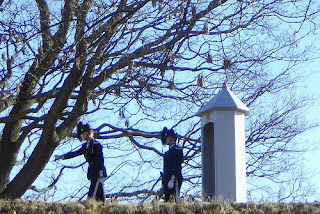 Down via the Old Town Hall 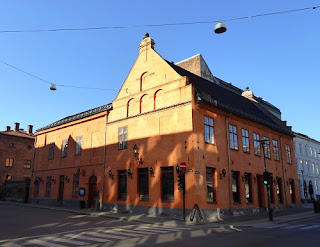 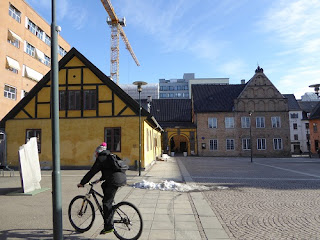 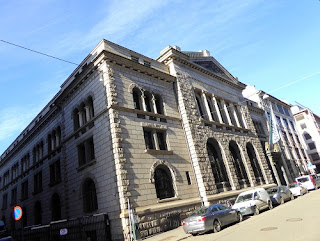 Here, it seems, many of Oslo's major artistic institutions have their office space. The NCO has more spontaneous concerts than those at the Aula - here in a smaller hall there's a bar at the back where drinks can be purchased during the performance. 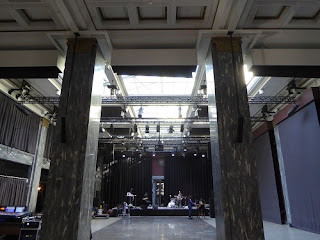 Strange reference to Auden's 'Stop all the clocks' in a hallway frescoing, though of course I'm always glad to see those lines. 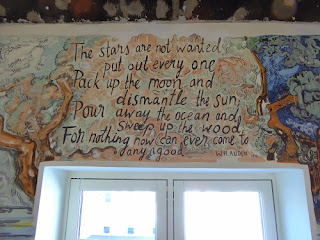 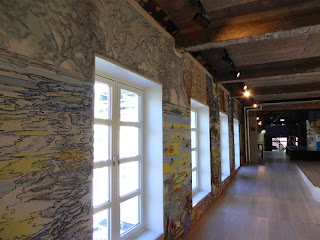 Traces of the old bank remain, like the doors to what was once the safe, maintaining their insignia even though there's more workshop space behind. 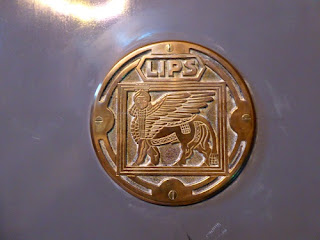 So to a delightful lunch round the corner with the NCO's Information and Marketing Manager, Euishin Kim. What happened in the afternoon as I walked to the formerly industrial zone of the city's north eas, previously untrodden territory for me, on my way to the Munch Museum will have to wait until another blog entry.
Posted by David at 11:45

There is so much more to Munch than "The Scream," isn't there? The sun painting is, for me, particularly moving--a celebration of light from a painter who had so much personal darkness with which to contend. The statue of a noseless FDR is a sad commentary on our times. I do hope it will be fixed, literally as well as figuratively. On a totally different track, I thought of you today and yesterday as I attending a concert (yesterday) and an open rehearsal (today) featuring John Adams's work. The dress rehearsal was of the Gospel According to the Other Mary, Robertson conducting the St. Louis Symphony. The rapport between conductor and musicians was palpable; I only wish I could have better heard his comments, though from gestures, we could get the gist. I can't help but think the Gospel will go down in history as one of Adams's finest works.

Yes, Munch's radiant later pictures are amazing - there's a wonderful self-portrait in Bergen which is so vibrant. Noseless Roosevelt is a symbol, but I don't know what happened to the nose and the notice beside the statue promises its restoration soon.

We have the NYPO here this weekend - plenty of great Adams (I am encouraging J to hear Absolute Jest tonight prefaced by the Beethoven quartet movements, or bits thereof, from which it quotes). Will put up with staid Alan Gilbert for that. And I agree - Gospel is one of the great scores, and makes the perfect diptych with El Nino, which I also come to love the more I hear it.