Last Thursday I headed over to Earlsfield and the excellent Tara Theatre for a matinee of Eastern Star, Guy Slater's new play about my good friend Chris Gunness's role in the 1988 Burmese 'Students' Revolution' and his relationship with freedom-fighting lawyer U Nay Min. That's Chris below in the Tara courtyard, with Guy on the left. 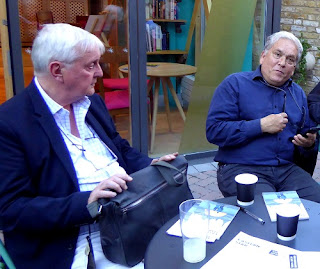 Then I took trains to Kings Cross for the British Library launch to accompany its small Beyond Timbuktu: Preserving the Manuscripts of Djenné exhibition - the great project to digitize the treasures of the town initiated and sustained by our indefatigable Sophie Sarin, with the BL's support. Before her speech, in French and English, London-based Malian Kolado Landoure said some words in Songho for those who get to see the screening of the event in Bamako. This photo by Cressida Bell, since it's sharper than any of mine. 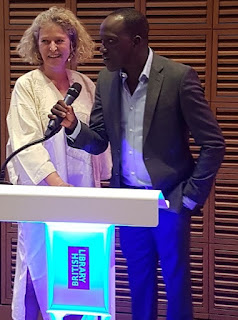 Eastern Star is a well constructed, directed and acted four-hander. Clearly the character of Maya Tun Aung, U Nay Min's young cousin who calls him uncle, is a catalyst for the two men to explain the background of their unsettling story. Chris knew that he did not come out of it well. Without intending to betray his Burmese contact after he'd made the World Service reports that brought the situation, and Daw Aung San Suu Kyi's part in it, to the rest of the world of the world, he gave his phone number to a contact in London, and Nay Min was imprisoned and tortured for eight years. When he tried to phone Chris after his release - it remains unclear why the call wasn't returned - he got another eight. The play essentially deals with their painful reunion many years later (pictured below, Michael Lumsden and David Yip in the first of two production photos by Brendan Foster). 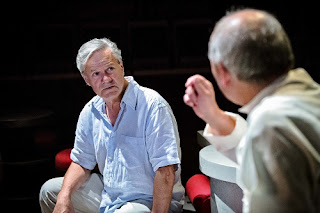 Can a reporter, however callow at the time, have his/her cake and eat it - burnish his/her reputation and try and absolve guilt in repentant weeping? Tricky one. Slater could have expanded the dialogue between the two men - Nay Min in fact spoke no English - but it rather stops short of answers. Perhaps there are none. 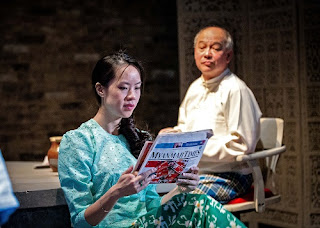 Good performances from the entire cast - Lumsden must have studied Chris, for his mannerisms and intonations are certainly there in the performance, Yip is fine in all but the sudden angry outbursts, Jake Hansard makes the character of 'Michael', Chris's partner, sympathetic, as does Julie Cheung-Inhin in her tricky role as the onlooker (pictured above with Yip). Elroy Ashmore's designs are handsome, in tune with the marvellous architecture of the Tara Theatre, an award winning project by the architects of Aedas. Doyen Jatinder Verma's wife, designer Claudia Mayer, has used Indian doors - the ones to the auditorium are especially fine 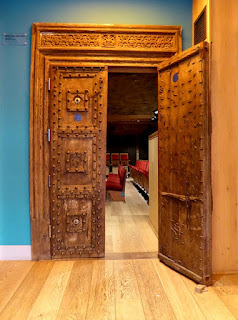 - and furnishings. The small studio upstairs had a display of photos relating to the 1988 uprising. 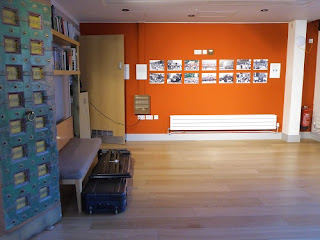 It was good to see so many friendly faces at Sophie's event. Some, one half-concealed following his own requests, are among the listeners here. 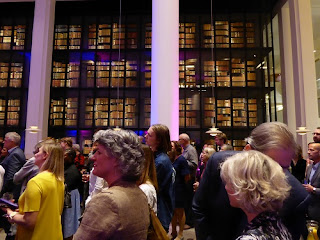 There were good speeches from Roly Keating, Director of the BM; Lisbet Rausing of Arcadia which has been sponsoring the Endangered Archives Projects and will do so for the next seven years to the tune of £9 million; Cat Evans, the latest British Ambassador to Mali; and then of course la Reine de Djenné, Mme. Sarin, herself, declaiming beautifully and managing to put very tactfully the fact that funds are desperately needed to keep the Djenné Archive and its archivist going.

The exhibition is a modest but judicious selection of photos both of Djenné itself, so familiar to us, and of manuscripts of various kinds, including the esoteric and the supernatural. 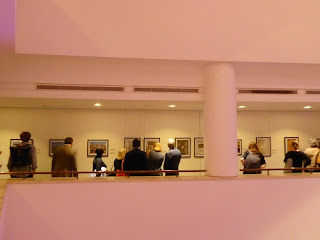 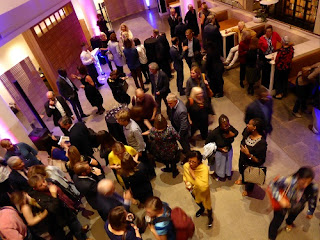 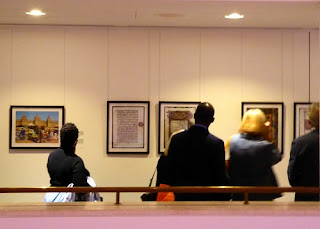 Finally, as a taster for glories to come, here's one of our oldest friends, in terms of how long we've known her, Jill Dunkerton, in front of the poster for the magnificent Mantegna and Bellini exhibition at the National Gallery before she took us round for a very exclusive view on Sunday afternoon (friends and family only). 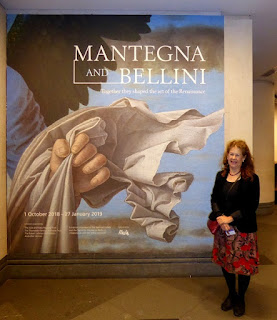 As restorer of early Italian paintings at the NG, Jill has spent three and a half years working on one of the great Bellini paintings in the exhibition. But more on that in another post.
Posted by David at 10:43