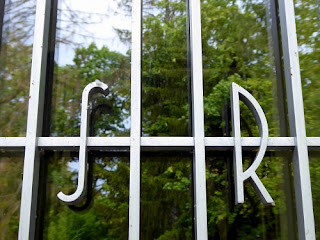 As in Sergey and Nataliya Rachmaninov (or Serge and Natalie Rachmaninoff, in the Frenchification SSR preferred in the west). Although works like the Rhapsody on a Theme of Paganini and the Symphonic Dances prove that Rachmaninov was no romantic reactionary, who would have thought his dream for the land he bought at Hertenstein near Weggis on the shores of Lake Lucerne in 1930 was the modernist architecture of what became the Villa Senar? 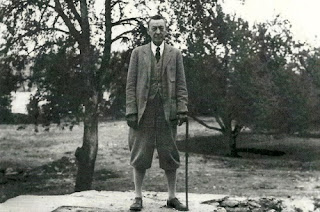 First thoughts were for a conversion of the grand chalet already extant in the 1.5 hectare park. Then Rachmaninov decided to start from scratch, commissioning the Lucerne architects Alfred Möri and Karl-Friedrich Krebs to demolish the original house, clear away five metres of rocky outcrop and construct both the villa - one of the few Bauhaus-inspired buildings in Switzerland - and a gardener's house, in which he lived for a while from July 1931: 'I feel splendid, I go walking a little and I work a lot'. He bought another 2,563 metres of land, ploughed it and bought a motor boat. The economic crisis dented his finances and his confidences, but he went ahead and the house was finally completed, inside as well as out, in March 1934. 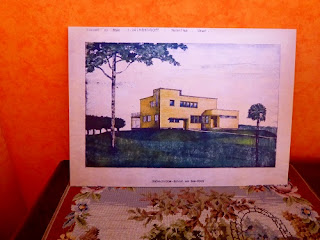 It offered, among other things, what he had stipulated: 'four bedrooms, with three bathrooms. The best room should definitely be the study with large windows 3.5 to 4 metres high looking out over Lake Lucerne'.Every summer he worked here, composing the Corelli Variations, the Paganini Rhapsody and the Third Symphony here, until August 1939 when he gave a final concert at the Lucerne Festival as soloist in both Beethoven's First Piano Concerto and his Paganini Rhapsody with Ansermet conducting, and left for the USA, never to return, on the 23rd, the day before the signing of the Hitler-Stalin/Molotov-Ribbentrop pact. 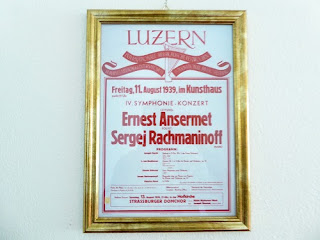 Not much has changed since then, though what the locals called 'Gibraltar' is now much more wooded, and presents a charming view below Rigi from the Lucerne boat. 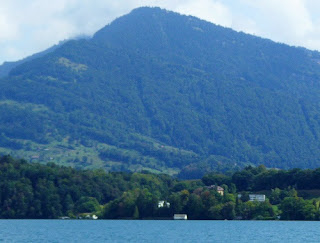 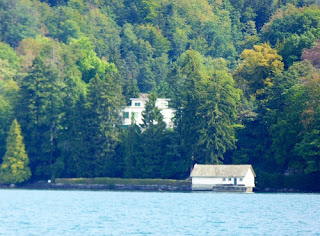 Many of the trees in the garden have grown substantially, not least the two pines which obscure the intended view from the house of Mount Pilatus across the lake (there are plans for their removal). This is what you should see, from my walk back to Hertenstein quay. 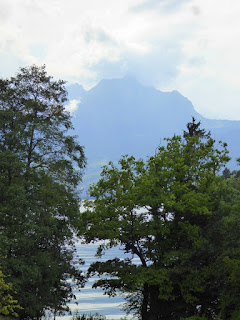 I planned my trip, while I was in Lucerne for two festival concerts - one of them, under Haitink, exceptional, the other excellent in parts - with the friendly co-operation of Ettore F. Volontieri, general manager of the villa since the death of Alexander Rachmaninoff, who lived there in recent years, assuring a continuity of sorts. What's the latest on the status of Villa Senar? Probably best if I quote Ettore: 'The Serge Rachmaninoff Foundation –  created in 2000 by his grandson Alexander to foster the better knowledge of Sergei Rachmaninoff as a composer and as a man – is presently working to achieve the transformation of the Estate as a modern and dynamic cultural centre, following the model of the Red House of Benjamin Britten in the UK. Together with the KKL, the Lucerne Festival, the Lucerne Symphony Orchestra (with its Zaubersee Festival) and the Wagner House in Tribschen, Villa Senar will contribute to create a unique cultural and musical environment on the Lake of Lucerne.' No substantial changes can be made: the house and grounds are under the protection of the Lucerne district council.

Perhaps I should have disembarked at Hertenstein, but I was keen to see a bit of Weggis, popular holiday destination for Brits among others (including my mother). It was a very lovely 45 minute walk along the shore of the lake, and I earmarked a spot close to the Rachmaninov bust for swimming. 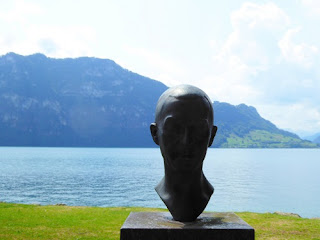 Needless to say I spent so long at the villa in Ettore's company that there wasn't time on the way back; and besides the glorious sunshine had yielded to dramatic clouds and heavy showers. It all becomes totally rustic when you turn off the lakeside road and head up towards a convent, famous for educating young Swiss women not at one point admitted anywhere else. There are greenhouses full of tomatoes to be sent to Migros in Lucerne - good to see the produce for that supermarket grown so locally - and the entrance to Senar, unobtrusive, is opposite the Schloss, where I later met three ladies staying there with other members of their choir while performing Beethoven's Mass in C locally. They didn't know that Rachmaninov's villa was hard by.

We started in the garden house, its plainness offset by several pleasing curves at SSR's suggestion 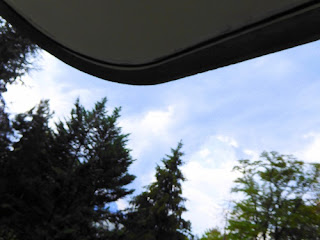 and walked to the villa, which presents its most forbidding angle from the north-east. The back of course is much more attractive; the study is to the left, three steps down from the main ground floor. 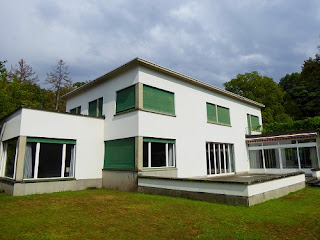 It's the lifeblood of the place, the reason why this should be open to visitors. Dominating it is the extra-length Steinway Grand presented to SSR by the company on his 60th birthday. 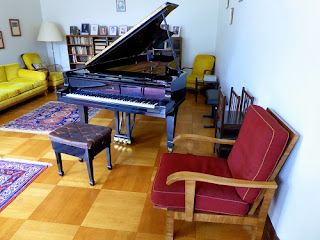 Rachmaninov sat at the piano with the windows behind him so that the light would fall on the music. The desk, on the other hand, looks directly out. 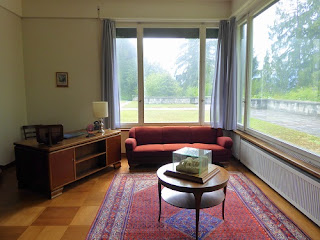 In the centre is a plaster cast of the composer's hands, with those long, long fingers. 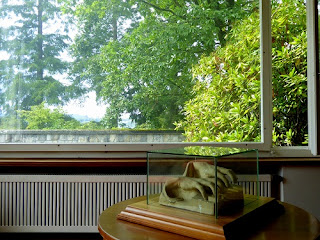 The contents of the music cabinet and the photos on top are not quite what they were in his lifetime - I guess many of Alexander's LPs have been added - and foxing meant that copies of the portraits needed to be made. The originals, and the more valuable scores, are housed in the archive upstairs. It's a fascinating selection, all the same. Tchaikovsky, SSR's greatest early influence and part-mentor, and Rimsky-Korsakov are to the left, Frederick Steinway and Josef Hofmann to the right. 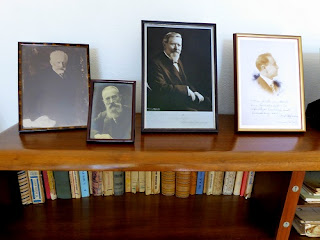 Odd juxtaposition - Fyodor Chaliapin and Noel Coward (who of course eventually had a place in Switzerland, Les Avants, where Joan Sutherland and Richard Bonynge became neighbours). 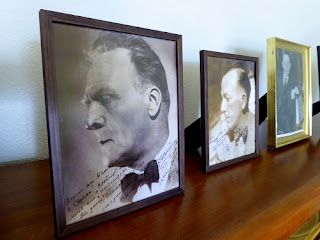 Pleased to see Don Quixote, Buddenbrooks and The Magic Mountain among the books. 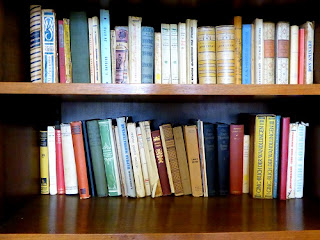 In one of several admirable articles in the well-produced booklet on Villa Senar, Elger Niels quotes from the Nabokov poem at which the pages of a volume in the library fell open:

Not the sea's sound...In the still night,
I hear a different reverberation:
The soft sound of my native land,
Her respiration and pulsation,..
In sleepless silence, one keeps listening
To one's own country, to her murmuring,
Her deathless deep.

Perhaps some of the trees in the grounds conjured up Russia for Rachmaninov. There is so much light. The dining room looks out to the garden beyond 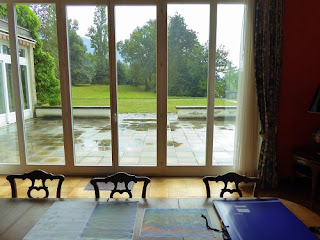 and there were many family gatherings outside during those precious summers. This photo offers one of the rare instances of SSR smiling. Nataliya is to the left. 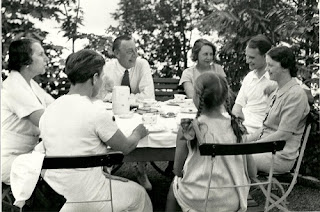 'SNR' is on so much, not least the cutlery,

and in my earlier quiz, duly answered, I featured the Rachmaninov tweed suit made in Jermyn Street - here's another angle. 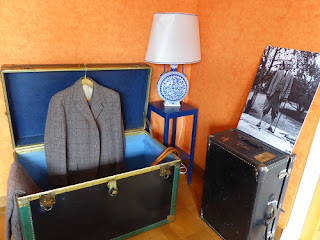 Many of the original fittings remain, including one nice long bathtub and an array of taps. 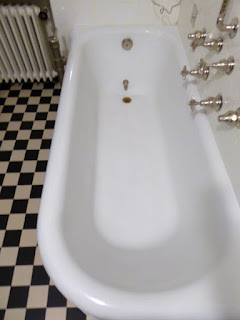 So outside, with various perspectives on the house 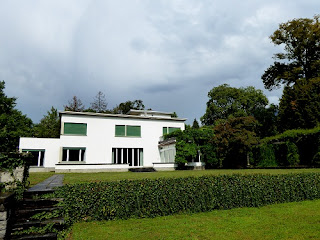 and a handsome flight of stone steps 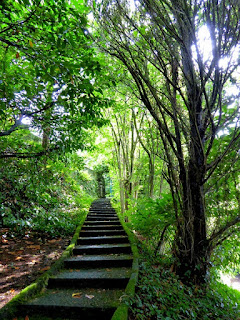 down to the boathouse 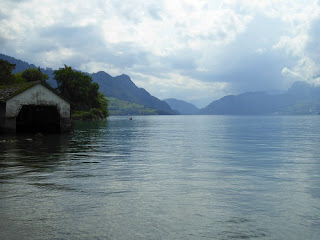 and a wonderful terrace right by the water's edge, a different perspective from the house higher up. 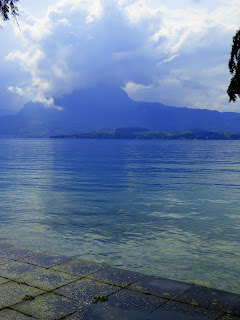 And then back, this time a shorter walk through a lovely valley 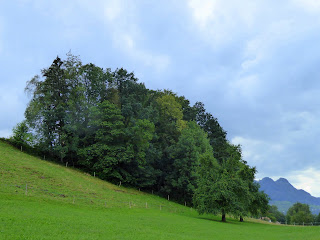 to Hertenstein quay, coffee and cake at a pleasant cafe, and the return journey, this time on one of the original steamers. 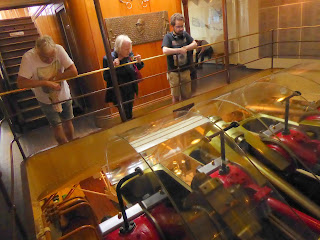 As dreamlike a round trip as if you arrive at Venice and leave it by vaporetto.

Who would have thought, indeed? It is too bad the house isn't open to visitors (if I read what you wrote correctly), so thanks all the more for giving us a window in.

Indeed - it's too bad that Rachmaninov family wrangles have kept Villa Senar in limbo, and it seems that visits will still be limited even if everything's finally sorted out. But I hope at least that there will be more cultural events there - in the gardens in the summer, if it's possible to plan with the capricious Swiss weather...

I am struggling to find the right place to leave a big "thank you" message and this may not be it. But here goes.

I only now (in Matan's lovely apartment in Berlin BTW) saw your wonderful post about Eastern Star. Thank you (from Guy and from me) about those perceptive comments. You totally got to the heart of it and understood why it's tortured me for so long.

To be discussed .... with gratitude. So kind of you to come along. Let's hope your readers are encouraged to go along to the Tara Theatre. It's a great space and Earlsfield is not that far away.

Seconded (re the Tara Theatre, a jewelled wonder). And anyone else reading the comment, it's related to the next post up, 'Friends in good places'. Thank you, Chris, and bravo. I wish I could have gone on with you to the Grenfell Tower event.

Thanks for the delightful and well-illustrated account of the Villa Senar. Ivanovka next?

I do hope so. I've 'done' Tchaikovsky's lovely place in Klin, the Scriabin apartment in Moscow and Rimsky-Korakov's home in St Petersburg, but Ivanovka (and tolstoy's Yasnaya Polyana) are high on the wish-list. When Putin's gone, perhaps.

The state of canton Lucerne has bought it, renovated, it is open for booking cultural events, and simply visiting.