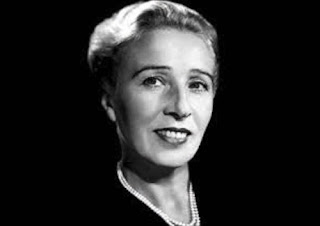 Continuing to dig in to the huge discography (300 plus Suisse Romande recordings for Decca alone) of Ernest Ansermet long after the BBC Radio 3 discussion of his legacy - the edited version still to be heard for the next few days on the BBC iPlayer here starting at 53m27s - I ordered up five discs from the Australian-based Eloquence wing of Decca, not least to explore his few opera recordings. And here I came across a voice I only previously knew through the Josef Krips Don Giovanni and Erich Kleiber Figaro, Brussels-born Suzanne Danco. Her lyric soprano is not so light as ever to be dubbed 'soubrette' - she sang Ellen Orford at La Scala, Marie in Wozzeck and Mimi - but it's the personality in everything she sings that shines through. 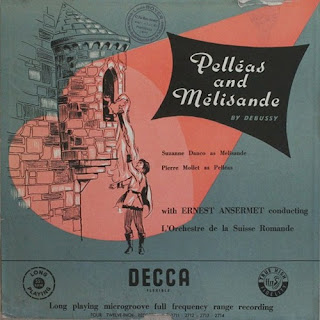 Anyone, for instance, who gets annoyed with poor Mélisande - abused, Maeterlinck would have us assume, by her previous lord and master Bluebeard before Golaud discovers her lost in the forest - might find this characterisation stronger than usual. There's certainly nothing wan or wispy about it, and you hear the pain creep in when Debussy needs it. As for the whole of this 1952 Pelléas et Mélisande, I think this may be the most compelling version I've ever heard on CD - I wish I'd known it when I spent six Monday afternoons on the work for my Opera in Depth course.

The classic Désormière recording of over a decade earlier is also very speech-melody conscious, and there will possibly never be a better Pelléas than Jacques Jansen (Ansermet's Pierre Mollet is also excellent). But here the sound is so much better, and Ansermet, preferring a forward sense of movement throughout to 'burn off the mists' long before Boulez, makes his strings sigh with pain and love. You can more or less understand, with even just a little French, what's being sung about just by listening without a libretto. Quelle clarté! I'd still turn to some recent recordings for further beauty of orchestral texturing, but I simply don't want to listen to a non-French cast who doesn't understand every nuance. 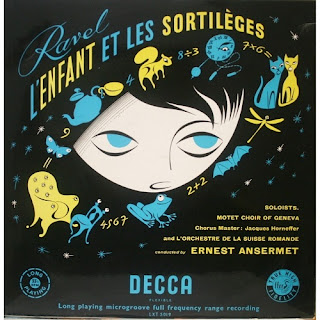 It's curious to see Danco get top billing in Ansermet's recording of Ravel's L'enfant et les sortilèges when in fact she sings not the role of the reactive child but the meltingly beautiful aria of the picture-book princess. Again, the pointillist detail of Ansermet's interpretation as captured in the bright old Decca recording is fabulous (even if the last chords of the Five O'Clock Foxtrot seem not to be fully scored) and here's Hugues Cuénod excelling, too, as old man Maths. Danco and her Golaud, Heinz Rehfuss, turn up in the aurally otiose L'Heure espagnole, too. But she's most bewitching in the Deux mélodies hébraïques - the first of which gives the strongest sense of the power she can unleash when necessary - and Shéhérazade. So full of charm and meaning, again, even if not as luxuriously upholstered as the classic version with Régine Crespin. Which I had quite forgotten is also an Ansermet/Suisse Romande special. Real gap in the library there - must correct. 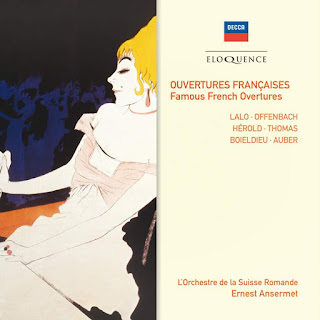 On the same set there's the first of Ansermet's Boléros with the Paris Conservatoire Orchestra. a good couple of minutes more leisurely than his Suisse Romande version. I was glad to find out that his recording of Hérold's Zampa Overture is lurid with character, explaining why I was so obsessed with this piece as a child (I took out the Ace of Diamonds LP of French overtures at least twice from Sutton Library). And the Haydn revelation continues with renewed admiration for the mixed moods of Symphony No. 83 (the hen-peckings follow a dark start) and the charm of No. 84's finale (funny how the un-soubriquet-ed symphonies often seem to be overshadowed) in the set of 'Paris' Symphonies. The discoveries keep on giving. 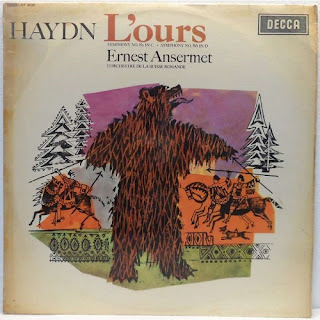 On a very un-French footnote, I also confirmed for myself the total-classic status of this recording of Britten's first opera, operetta, musical, call it what you will. 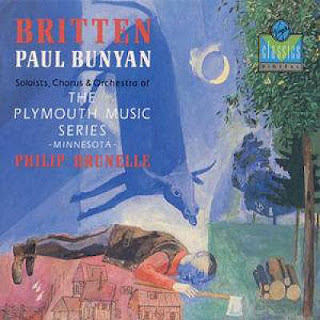 Having been disappointed with so much about the Wilton's mishandling of Paul Bunyan, despite some excellent casting, I came home, and confirmed the work's masterpiece status thanks to a cast under Philip Brunelle that puts it across with exemplary clarity (that word again, not so evocative in English).
Posted by David at 19:29

Yes Suzanne dancing as meilisande was very popular in record clubs in Dublin in. The 1950s

I know that I have made the point before, but I hold strongly that Pelleas & Melisande reflects most strongly the French view of the world ( to an extent depending on the production). Proust does that as well. I refer to a stance, I suppose more generally reflecting the view embodied in the French language itself. Just as Wagner is such a perfect example of the German Weltanshauung of its time.

Liam - dancing? Which bit? David - you could equally well argue that the theme of the opera is universal. As Richard Jones put it when I asked him to summarise the plot for a cable radio opera channel I used to run, 'it's about two men who fall in love with the same woman, with disastrous results'. The Frenchness is in Debussy's groundbreaking speech-melodic setting of the text. Maeterlinck, of course, was Belgian - that might account for the proto-surrealist aspect.

I've only just twigged that 'dancing' must have been predictive text for 'Danco'...

The plot of an opera is only the skeleton on which the flesh of the analysis is hung - the music ( in this case, as you say), but also the way of looking at the world.

Can't even entirely agree with that. So much of Debussy's opera, in the orchestra at least, is indebted to Wagner. Golaud's jealousy becomes Wagnerian. The delicacy and the exquisite layering are French. And if Debussy and Wagner weren't universal in their appeal, we would no longer rank their operas as among the very greatest.