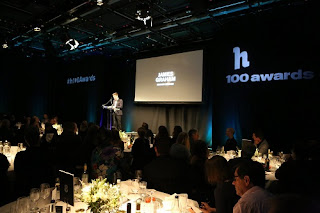 Having been one of the four judges for the Hospital Club's Young Influencer of the Year Award - courtesy of The Arts Desk as 'media partner' - I was looking forward to the annual event. All the more so since last year gave me insights into corners of creative innovation I knew little about (the star indisputably being Lady Leshurr; I always meant to write about her, and the event, but never did). 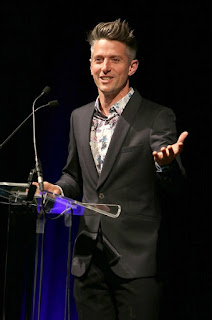 The good news was that Stuart Goldsmith (pictured above), a stand-up comedian who's genuinely funny all the time and would be excellent at impro, so quickly does he react to the immediate situation, returned to compere. While it was a shame that we didn't get the likes of John Simpson this time round, the keynote speaker and his speech could hardly have been more impressive. Must catch up with James Graham's dramas - The House, having started at the National Theatre, has been on a successful UK tour and I can't wait for his forthcoming TV drama about Brexit starring Benedict Cumberbatch - on the strength of his golden, and very sincere words. 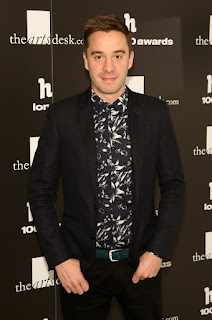 You can read the whole speech on The Arts Desk. Most attractive personality, too, genuinely nervous about speaking but propped up by the beauty of his text. A person could develop a crush... 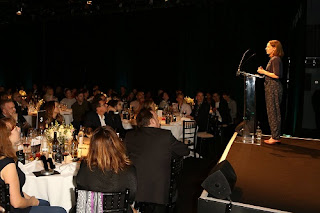 Our own Hanna Weibye, the only dance writer who could possibly have followed the classiest act of Ismene Brown on  TAD, gave a lovely speech, too. With most of the awards, we only got to know about the contenders in the beautifully-produced booklet handed out afterwards, but our Young Influencers all had context. 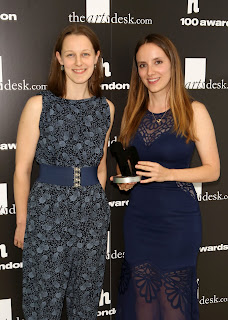 Marina Gerner, pictured with Hanna above, was an eloquent winner, but having spent more time on James Bingham's blog, Sense of Pitch, I'm more than ever sure that he's the most original thinker among our group. Doer too, and he's off to the fabulously promising new Irish National Opera, having been given carte blanche to develop its education programme without imposition from the usual suspects. Excellent company over good food, too. 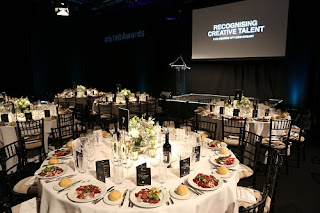 Of the acceptance speeches, Bradford Literature Festival Director Syima Aslam's was the most thought-provoking. She spoke about the majority of lower-income groups,and of her pride in the English language, which she didn't begin to learn until the age of 8 (her mother still doesn't speak it). Here she is with our own TAD literary and musical doyen Boyd Tonkin. 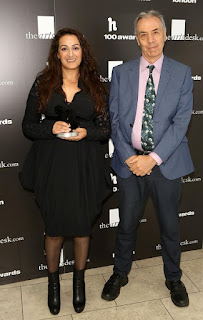 Others provoked curiosity and lines to pursue. The Arts Desk has long been singing the praises of Keeping Faith, a TV thriller made in both Welsh and English, so I didn't need much persuasion to catch up with Eve Myles, protagonist and winner of the Broadcast category. Her character is so compelling from the start, all over the place in a way that you take for granted, as you do the normality of the town set-up even though you know it's quickly going to go awry. I've only seen the first episode and I'm hooked. So I was throughout Bodyguard, but it followed a more conventional pattern and the last episode was rather sowhatish. 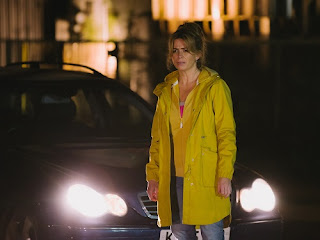 My one sticking-point about the awards - that the Hospital Club doesn't place classical music and opera in the same fashionable mainstream as its featured arts - was partly appeased by that already great cellist Sheku Kanneh-Mason winning the impossibly broad Music category (among the nine other candidates, Gillian Moore was the only other one with 'classical' credentials). Let's hope that as a member, I can influence 'our' presence there by setting up an event or two. Our own TAD treasure Thomas H Green was there to announce the winner and Sheku, as unshakably modest and diffident as ever, had filmed a little speech. 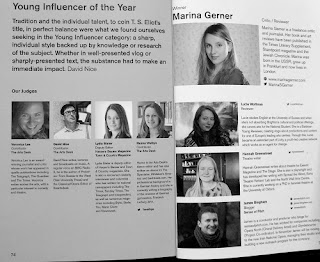 TAD sails on, with as little prospect of payment as ever, but I think we do the best possible job and I'm very proud of our extensive Proms coverage. Now we're in the middle of the Royal Opera Ring cycle, with one reviewer per each instalment. I get to see Siegfried, the only one I didn't get to see first time around. Didn't think much of any of them; let's see if this marks a change of opinion.
Posted by David at 14:18