Rake and Spades at the Frontline: do join us 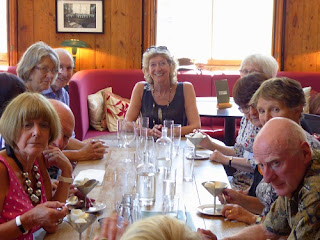 Yes, that's the great Dame Felicity Lott as our Opera in Depth end-of-term lunch guest last term, before she went on to talk with her usual natural charm, wit and insight on Britten (we were covering A Midsummer Night's Dream over five Monday afternoons, using the Peter Hall Glyndebourne DVD in which she plays an appropriately tall Helena. Yesterday she was a very impressed onlooker at the celebrations of the great director's life). There are, incidentally, many more of us than you see in the Frontline club room shot above. 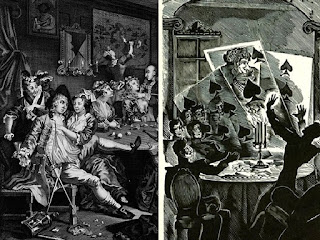 For the coming term, which starts next Monday, I'll be covering Stravinsky's The Rake's Progress and Tchaikovsky's The Queen of Spades, two operas which climax in a crucial game of cards. Pikovaya Dama, to give it the proper Russian name (Pique Dame, incidentally, is nonsensical) will be staged at the Royal Opera in Stefan Herheim's Tchaikovskycentric production; having reviewed the DVD of its Dutch incarnation for the BBC Music Magazine, I can say you're in for a treat, a concept that's actually followed through, so let's forget that dramatically abysmal Pelléas et Mélisande at Glyndebourne.

Vladimir Jurowski will conduct The Rake's Progress at the Royal Festival Hall (no idea yet how semi-staged it's going to be). He made such poignant and light-of-touch work of it at ENO years back, in a quirky production by Annabel Arden with a profoundly moving Bedlam scene. Back to the Garden of Eden below in the recent British Youth Orchestra production I found so effective: Pedro Ometto as Trulove, Samantha Clarke as Anne and Frederick Jones as Tom Rakewell (image by Bill Knight). 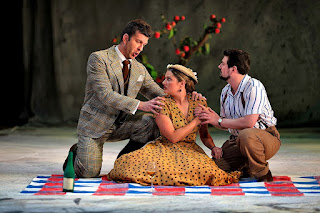 Meanwhile, a Rake extravaganza linked to the above has already taken some shape for our last class on 17 November. As the Frontline Club flummoxed me a couple of months ago by telling me that they regard the 'run-up to Christmas' as including the whole of November, when they hope to make more than the substantial amount I pay them for my weekly two hours, I've had to find other homes for the last three Mondays. Which, it now seems, will be St James's Church Sussex Gardens, with its avowedly fine audio-visual set-up - I'm going to check it out on Monday - and its new Steinway Boston Concert Grand. 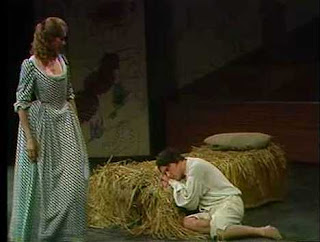 The idea for the proposed event took shape quickly after I'd been to see the BYO Rake. FLott, as Madame la Patronne of BYO (as she is of the Poulenc Society), had recommended I go, and I'm glad I did. So she has agreed to preside, a lovely connection back to the famous Hockney-designed Glyndebourne Rake in which she sang the role of Anne Trulove, happily preserved on DVD (the Bedlam scene above with Leo Goerke). Samantha Clarke, already a world-class Anne, will, we hope, reprise the aria. 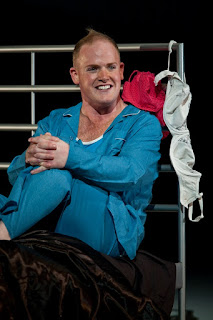 Nicky Spence - who sang Tom Rakewell for BYO a decade ago, pictured above - will join with his pianist partner Dylan Perez, and Susie Self, a hairy-chested Baba the Turk for Opera Factory back in the 1990s, has agreed to come along too.

Students for the term will have this as part of their package, but we hope others will come along too, to help us raise money for BYO. A unique event - put it in your diaries, and leave a message here with your contact details (I won't publish it) if you want to join us either for that or for the entire term.
Posted by David at 15:41

Might you explain why Pique Dame is "nonsensical"? It is the standard German for the playing card, the queen of spades.

As someone who sometimes still thinks of (for example) La forza del destino as Die Macht des Schicksals, I am puzzled.

It's cod French - the correct term is Dame de pique. So since this is a drama based in Petersburg but with its roots in Versailles, surely a Russian or a French title is best? And then a literal translation into English or German?

We'll have to agree to disagree on this David. The recordings of the opera Pique Dame and the many placards and theatre programmes showing performances of Pique Dame, are so called not because someone once used some "cod French" and this was then thoughtlessly reproduced across the decades - but rather because the (correct) German for the playing card the queen of spades is indeed "Pique Dame".

So you may have a point when (if) there are French-language performances of the opera, but not when the opera is performed in German. Of course the show is better in Russian, but that's a different point.

But I'm NOT talking about when the opera is performed in German. That's not the point here, which is that the term is lazily applied to productions and recordings worldwide.

What an excellent program you have developed for the rakes prepress and a lovely photo of felicity Lott and some of yor class. A very lively lady who speaks such beautiful French .
I saw her once in Paris in the old cafe Francis ,opposition and across the square from the opera Bastille. She was wearing a fine full length fur coat and looked so soigné. Really Alice true love grown up.

I notice that you have not published my comment, nor replied to it. My only point was that I do not think that there is any evidence of an "all-powerful...Jewish lobby" which your friend Sophie refers to, or perhaps she does have evidence of this?
I hope that you and J are well and happy
John Graham, Edinburgh

Never received a message from you, John; perhaps you'd like to send again under the relevant discussion?

In fact I was ensconced in Gartmore House, Trossachs territory, all weekend, giving a killing eight lectures on Das Rheingold in two and a bit days to the Wagner Society of Scotland. As we used the Chereau Ring for certain scenes, I was reminiscing a lot about our 'discovery' of the Ring, week by week, on various televisions in various Edinburgh flats or houses...including Dick Godden's at one point, I think. Seminal experience indeed. And the power of it all only grows the more one knows how it 'works'.

yes I too remember the discovery of Boulez's Ring, dir.Patrice Chereau, Gwyneth Jones etc, first at Pollok, then at Godden's house in Ross Road in Spring 1983, wherein he had a very new-fangled VHS for those Philips videotapes. I watched the Bayreuth Barenboim Ring and then the Met Levine a few winters ago on DVD and as long as I took it one act a night was able to get quite a lot from both.
Your friend Sophie mentioned in her blog a "Jewish Lobby" which is "all-powerful", discussing Corbyn and Labour. I merely asked what evidence she had for this. It reminded me of pernicious talk of a "gay Lobby" in the professions who would go so far as to act against their own clients' interests in order to advance this cause. This one turned out to be nothing more than fiction and defamation against gay people, based on no evidence whatever

Wasn't it telly-watching rather than VHS tapes? We followed each act, I think. I had the LPs but not the videotapes - though now I use the DVDs in class a lot, along with the Kupfer conducted by Barenboim. Those two remain the best, though the effects of Lepage at the Met go some way to making up for the feeble personenregie.

You mean a lobby against Corbyn and co? I'm not sure how organised it is, but I know from previous controversies that there is a feral bunch who come out against anything anti-Israel and pro-Palestinian. Sad to say that Maureen Lipman was among them during the Tricyle storm in a teacup.

Equally well there are lots of Jews who do not agree with the feral bunch against Corbyn, as well as Jews who don't agree with the very existence of Israel, and all points inbetween. My point was that talk of an "all-powerful Jewish Lobby", Sophie Sarin's words not mine, both disregard this vast spectrum of Jewish opinion on matters Jewish, but more worryingly, indicate Jewish control of the media, hence the "all-powerful" bit. There ARE lots of Jewish people in the media, but I don't think there is any evidence that they control anything. Jewish "control" of the media sounds to me like something out of Goebbels.

I agree with you. Best take up the issue with Sophie on HER blog, where she first discussed this sorry state of affairs.

will do, David. My powerful Asperger memory recalls TV format of Boulez Ring at Pollok, in a sweaty basement room in Holland, and VHS format in Sir Anthony Godden's house in Ross Road, courtesy of his son, Richard, who gave us lifts back to the Dalry Cemetery gatehouse afterwards in his Morris Minor. Regarding the Levine Ring, were you not that impressed with Deborah Voigt's Brunnhilde? I thought she did quite well, though I am no expert.

Your powerful Asperger memory is playing you false, I think. We were living in the New Town then, and maybe saw Act One of Walkuere in the place you shared with that funny chap called Robin, Three chez Godden (I think - but that may have been later if you think Dalry Cemetery Gatehouse came into it - not sure in that case why you would have come too) and certainly part of Goetterdaemmerung at 32 Dundas Street.

I rssisted the Lepage Ring for too long, was only partially impressed with the two scenes we saw of Rheingold up in the Trossachs. Will wade through the rest, though I can't imagine Voigt was in best vocal form - the top went after the dramatic weight loss.