An audience with Siegfried 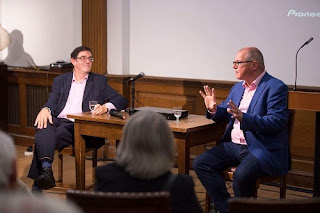 I'll admit I had my doubts about interviewing Heldentenor Stefan Vinke for the Wagner Society. I'd only heard a touch-and-go tenor solo in Mahler's Eighth at the Proms; I asked the keen young organiser, Henry Kennedy, if I could wait and see until I'd reviewed the Royal Opera Siegfried in the recent revival of Keith Warner's Ring cycle. After all, it would be ungallant and embarrassing to be sitting there with him if I'd written anything adverse. 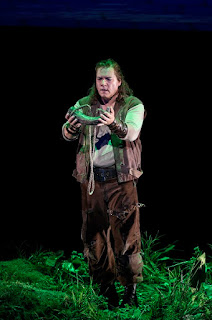 My doubts were more than banished: this was easily the best Siegfried I've heard after Jerusalem's in Kupfer's Bayreuth Ring. A colleague whispered in my ear at the end of Act One, 'I shouldn't be saying this to another critic, but that was sensational, wasn't it?' - and it was. Though at the beginning of Act Two he was recovering from an allergy attack in the interval, Vinke had all the extraordinary stamina needed to come out sounding fresh as a daisy in the final duet with Nina Stemme's  Brünnhilde- indeed, it's the only time I've heard that with both singers sounding equally good. Talk  photos courtesy of the Wagner Society's Ben Tomlin - I'll spare you the ones of me gesticulating, but I rather like them for once - while the images of the Royal Opera Ring are by Bill Cooper. 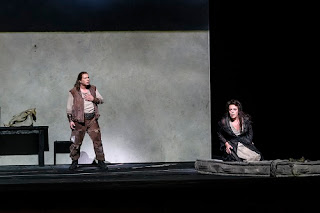 Unsurprisingly, given his well-acted characterisation, Vinke turned out to be a supremely intelligent and engaging person. Which leading Wagner singer isn't? Well, both he and Stemme the following week in Stockholm could mention one exception each to the general rule of collegial Wagner singers (though they didn't name names, and I didn't press). But they both agreed that, yes, supportiveness and team spirit were paramount in Wagnerworld. 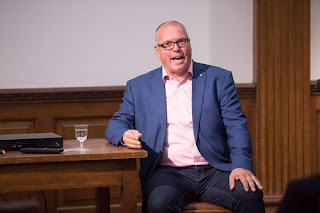 How I wish this interview had been recorded, since all he had to say was fascinating and often very funny (Wagnerians need a sense of humour too - look at Birgit Nilsson)  It turned out that, though the splendid idea of Siegfried's kissing Mime on the top of the head before rushing out into the forest in Act 1 was Warner's, the likable characterisation was one with which Vinke was in agreement. He certainly doesn't see the young hero as brute or born killer, more wild child who has the intuition and intelligence to learn from his experiences in a way we should find touching. 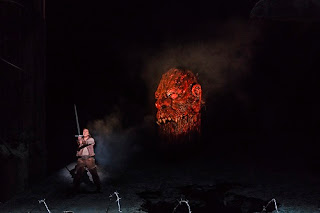 If a director wants a different view, then he expects to be told why, as he was by Graham Vick, whose ability to listen, think over and return to explain, one way or the other, he very much admires. It was clear he had no respect for Frank Castorf at Bayreuth, who could never come up with a convincing justification for his random ideas. We listened to Vinke in the end of the forging sequence on the Seattle recording, complete with rhythmically accurate hammering - not possible, he said, at Kirill Petrenko's fast tempo in Germany - and he reacted by acting a lot of it out while listening: critical, but not unduly so, of what he'd achieved there. I can't embed it but it's here, and worth a listen.

Vinke loves working with the top Mime of our time, Gerhard Siegel, who's also sung Siegfried, and will listen to his suggestions; at one point. Siegel asked why he was wearing himself out with so much stuff before a big entry, advising him to save himself a bit, which he did. 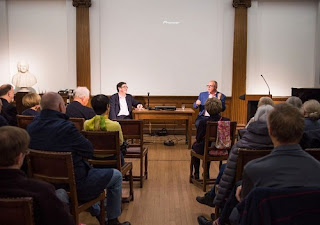 Conductors: he made an interesting comparison between Antonio Pappano, who marks out key points but allows singers some freedom in between before everything comes back in line, and Kirill Petrenko, who controls more bar by bar, note by note: he prefers the former, but respects both approaches.

Trained in organ studies and choral music, Vinke has a firm favourite in the concert repertoire - Elgar's The Dream of Gerontius, which following its heyday when Strauss commended Elgar as 'the first English progressivist' at the 1902 Lower Rhine Festival in Dusseldorf, still meets with resistance in Germany (so do the symphonies; so does Sibelius, so Elgar's in good company). Still on the list? The Emperor in Die Frau ohne Schatten, coming soon, and the time when he can sing Loge, Siegmund and Siegfried in a single Ring cycle (two of the three are imminent). Lively responses to some interesting questions, and then he was off on a rainy Saturday afternoon to indulge his kids in shopping down Neal Street. Great guy.
Posted by David at 13:15

I do always enjoy your posts with commentary from the singer's point of view, and Vinke is certainly no exception. This I found particularly amusing: "It was clear he had no respect for Frank Castorf at Bayreuth, who could never come up with a convincing justification for his random ideas." I can only imagine!

Does one expect an artist to justify his art? And ideas that appear random to observers can have a pattern to the artist

If you're talking about directors, Sir David - are they artists? Discuss - then yes, one expects them to give motivation to the performers they're directing. So that even if the singers don't agree with the characteristion, they know why they're being asked to act/perform as they are. This is theatre, after all. If it all appears random to the observer, as I'm told the latest Bayreuth Ring did even on three viewings, then it's failed. Strauss to Hofmannsthal on obscure symbolism in Ariadne: 'Isn't this a little dangerous? And isn't some of the interpretation still lacking in the action itself? If even I couldn't see itm just think of the audience and - the critics'.

Well, I was not entirely serious. Nevertheless, as The Ring ( not Ariadne) is so extraordinary - by which I mean, removed from any realistic context - how can one say that a production is not random? However as you know you have to aim off for wind with me, on these topics

I really really liked having the Valkyrie on motor bikes

Now you're being wilful. No production should feel random. The nub is real human emotions, however extravagant. The director's job is to bring those to the fore. Then the mise-en-scene, as in any mythology, can be as he or seh pleases, so long as there's a consistency. I felt that wasn't the case with Warner's production, and nothing I've seen of Castorf's work at Bayreuth inspires confidence.

Here’s a layperson thought on the role of the artistic director vis-vis performers: the artistic director is a leader of a team and, as such, has a responsibilty to make his/her vision clear to performers who are expected to help realize that vision onstage. Failure to do that, as appears to have happened here, puts comprehensibility of the production in peril.

Exactly so. And not bothering to communicate your 'vision' to the performers is insulting.