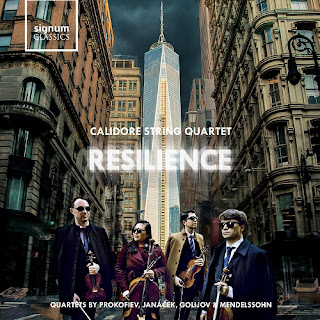 I'll never forget hearing Mendelssohn's Sixth String Quartet in F minor for the first time. It was also my first acquaintance with the Calidores, on a gloomy evening in Kilrenny Church, rain streaking the windows: their debut at the East Neuk Festival which led to their return the following year to play all six quartets. 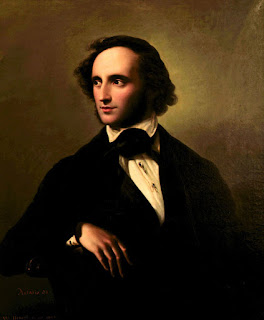 It couldn't have been a more tumultuous introduction to a work of unequivocal, if not entirely unrelieved, tragedy. At the time of composing the quartet (the above painting by his brother-in-law Wilhelm Hensel was made not long before), Felix had just lost his beloved sister Fanny Mendelssohn Hensel, dead at the age of 41 from complications following a stroke during rehearsals for her brother's oratorio The First Walpurgis Night. She's pictured below by her husband (who, by the way, gave her every encouragement to compose; brother and father forbade publication of her works. Luckily the Mendelssohn House in Leipzig devotes half a floor to her). Little wonder, given the suddenness of the news, that no-longer-happy Felix shrieked and collapsed. Six months later he, too, died from a stroke. 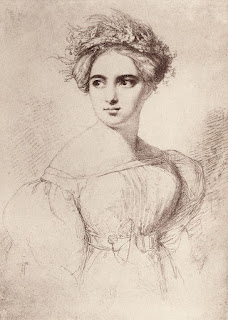 What a cruel last year for a child of light. But then without the blow we would never have had music of this existential profundity. There's no hiding from the pain; most remarkable for me is the replacement of the usual Mendelssohnian faerie scherzo with more chromatic churning; the way it cadences shows form just shying away from the unbearable, though the repetitions are hard in themselves. The Adagio is beautiful, but still taking wing from a minor opening which persists. I know what the Calidores mean by 'virtuosic' in the coda, extraordinarily demanding for the first violin; but this is still pain made manifest, and it's shatteringly played on their new CD. 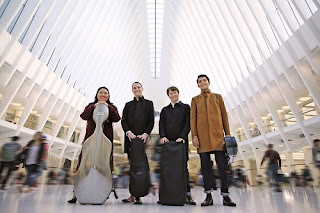 Which finds a common thread, obviously a sincere and not a gimmicky one, in the response this and the other works on the disc drew from audiences at a time of upheaval. Both in the line note and in a (completely different) article for The Arts Desk, the Calidores (chiefly, I think, in the person of their most eloquent speaker and writer Ryan Meehan) describe how unsettled they were in focusing on their work in the run-up to the 2016 election and the amazing audience reactions they drew thereafter.

This is indeed riven music, starting with Prokofiev's vibrant but often ambiguous handling of Kabardinian folk music when evacuated from Moscow in 1941 and continuing with the earthquakes of Janáček's First Quartet ('The Kreutzer Sonata'). Golijov's Tenebrae makes more of an interlude, but exquisitely done. Anyway, it's a marvellous programme, grittily argued, even if the in-your-face sound takes a bit of getting used to. A fine counterpoint, as Graham Rickson observes on The Arts Desk, to Sean Shibe's softLOUD masterpiece.
Posted by David at 10:09

I'm not at all familiar with Mendelssohn's String Quartets, and this CD, with its interesting selections looks like a good place to start. Thanks for noting it.

The Sixth is very uncharacteristic, but an absolute masterpiece. The First, like the Overture to A Midsummer Night's Dream and the Octet, must be the greatest full-scale work ever composed by a teenager. His faerie scherzos are so wonderful, too.