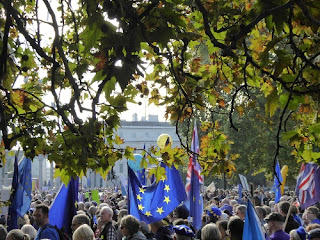 ...seems like standing a real chance of becoming reality as day by day more influential figures call for a People's Vote and Mrs Mayhem's 'deal' seems doomed in Parliament. 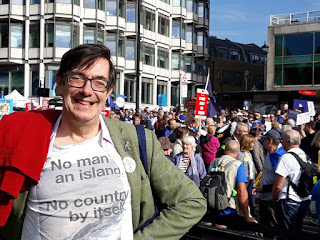 Now's the time to start thanking the organisers for having a long-term goal in mind and keeping up the momentum. Because a poor deal and no deal are no longer options. 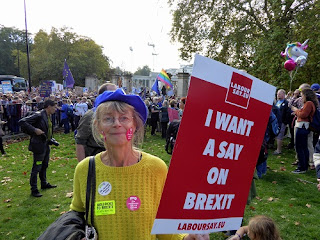 Not that I was able to follow the route, as I did earlier this year, in March and June, and for the anti-Trump march. My good friend Deborah had come up from Lacock and we were both due at Glyndebourne at 4pm for the tour production of Massenet's Cendrillon. 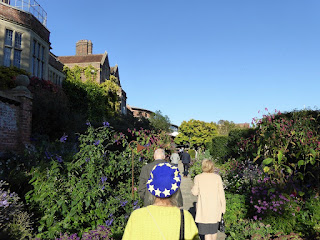 So we got to Hyde Park Corner for the start, realising that bigger-than-anticipated crowds were likely from the queues up the escalator at the tube station. 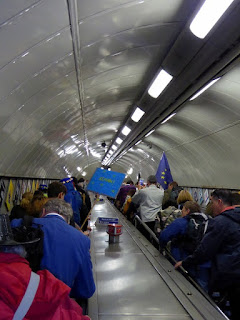 By all accounts it took three hours for the march to get started, by which stage we were gone, though J marched on our behalf later. Still, the start was a merry melee, and just about the first familiar face we saw was Anna Soubry's. 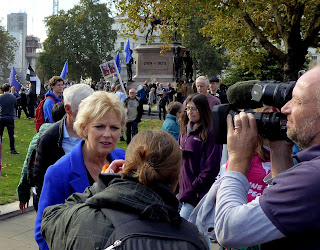 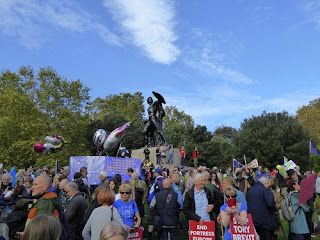 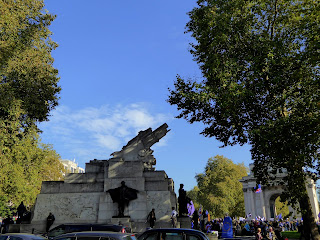 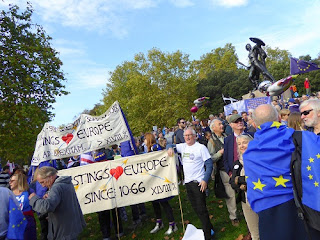 along with quite a few sporting this witty commentary on the First Big Lie (for which BoJob looks up for prosecution). This was the best designed that I saw. 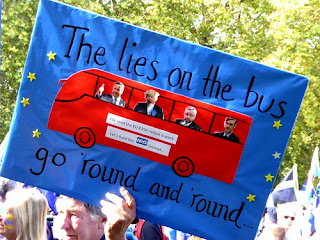 At the entrance to Hyde Park, a different cause was being espoused 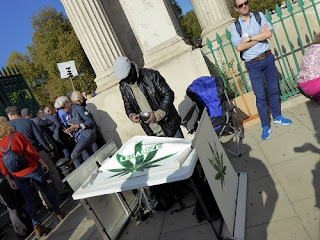 and I don't know if this band was part of the set-up, but they helped the carnival spirit, 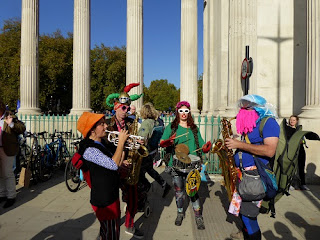 Heading to Victoria, we finally saw the young who had been very much in the minority at the start finally having risen to join. And then it was a convoluted journey to Glyndebourne, bus replacement included, but nobody minded too much on a glorious afternoon. We decided not to change 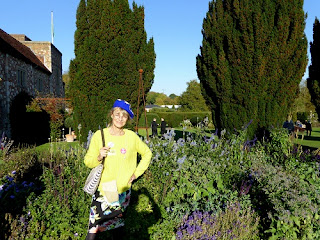 and had nothing but delightful conversations with operagoers who wished they'd been able to attend. If anyone was hostile, nothing was said. Great gardener Deborah was fascinated by the abundance of purple-flowering sage. This is the best, along with Japanese wind anemones, for the end of season 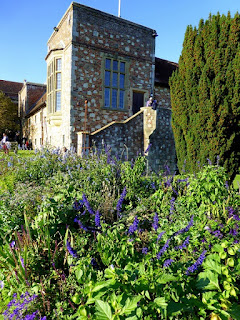 and of course the trees were all displaying in advance of a change in London. 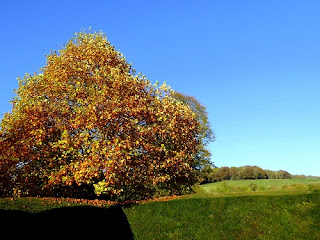 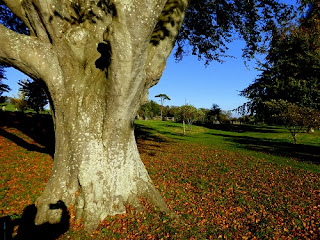 Walking round the lake couldn't help but remind me of one tour visit the day after the big hurricane - the opera was Nigel Osborne's punchy and very short The Electrification of the Soviet Union - when so many specimens were uprooted and showing their chalk-covered roots. 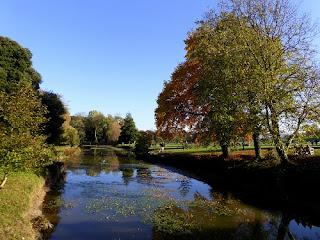 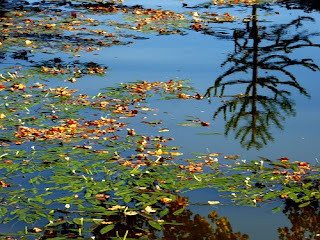 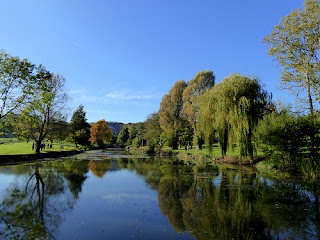 Sheep were back across the haha 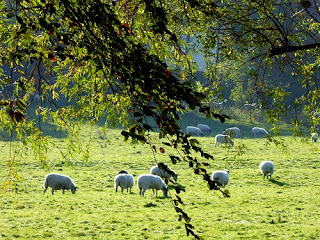 and folk were out enjoying a very warm sun. 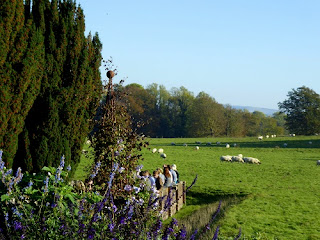 If only Fiona Shaw's production of an opera I adore hadn't been such a mess. Much work to be done if it's to make sense in the main season next year. Meanwhile our labours continue to get to that People's Vote. Golden October may have declined into sombre November, with 24 hours of lashing rain and cold on Tuesday marking the start of winter - this was the view from the study window - 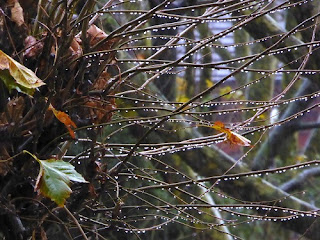 but we keep our hearts and minds stoked.
Posted by David at 15:18

Brexit to Glyndebourne. All in a day's work. Thanks for the personal account of the march. Now what?

The second vote, of course. What other option could there be? May's proposal won't pass in Parliament, No Deal is not an option; this is the only way out. But it's still a long haul. And for me, a trip to Birmingham today to hear magnificent Mirga conduct the CBSO in Weinberg and Shostakovich...

We are knocking all available wood here that the second vote push succeeds. Grand to see you marching in such sartorial splendor, with your Wolfgang Tillmans' T-shirt!

Sartorial it ain't - doesn't quite go with tweed - but we needed to make our statements, and very glad we carried it over to Glyndeitz, otherwise we wouldn't have had all those friendly conversations.

Happy thanksgiving - I guess you had something to celebrate with Delgado entering the Senate. Well done again, and onwards for both our beleaguered countries!

Haha, and here I thought everything went with tweed! (House, actually, not the Senate. Fortunately in NY, both current Senators are liberal D.)

House of Representatives, then? I could have sworn it was the Senate (because I thought it a bit odd at the time for a newcomer, though what do I know?)

Yes, House of Repsresentatives, and it is by no means your obligation to try and keep this all straight, any more than I can the structure in the UK!

It seems to me that it is probable that NO deal with the EU can be ideal, and anyway there is no deal which can satisfy all the disparate parties in this country. Hence it is unfair to criticise Mrs May for putting the deal together that she did put together. Once the referendum result was achieved, the government had little choice but to act as it has acted. One might go further and say that as a result of the various matters revealed by the negotiations no deal is better than staying in the EU, and this is a quite separate point from any ideological standpoint as to whether the UK should be "independent" This points of course to a second referendum. The government's position is against that, but it is difficult to see how they could adopt any other position. It is up to some other of the parties to bring a motion to the Commons. Mrs May would have to allow a free vote

Every time I begin to sympathise just a little with Mrs Mayhem for 'having a job to do and getting on with it', she goes and says or does something so unnecessarily poisonous - like remarking on EU citizens 'jumping the queue' - that reminds me what a vile Home Secretary she was, that she said the opposite before the referendum of what she's been saying ever since, that she kowtowed to the far right in her party as before and that she deserves everything that's coming to her. A politician with no moral moorings or consistent principles - and they do exist, look at Nicola Sturgeon - will always come unstuck. Doggedness is May's only quality.

Taking account of all significant opinions - or rather, of all significant power factors, however undesirable - is what democracy means. To ignore the power factors is to get nowhere. What Mrs May lacks is not principles but the ability to point in one direction and move in another, like Harold macmillan, or to finesse everyone like Harold Wilson. That is what political life is about, and good ends are achievable only by the employment of such approaches even though they may seem devious. A great politician can manoeuvre in this way and maintain a strong moral base, as in the case of FDR. I cannot see any politician today with these skills. I think that Nicola Sturgeon has a rather unambiguous hand of cards to play