Around the Shostakovich quartets 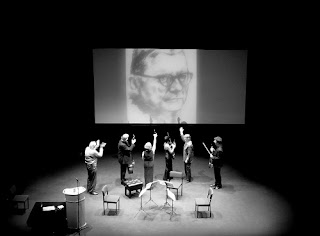 The Dante Quartet (violinists Krysia Osostowicz and Oscar Perks, viola-player Yuko Inoue and cellist Richard Jenkinson) plus Jim Page (left) and Jenny McGregor-Smith (second from right), the two inspiring organisers of the Bromsgrove weekend devoted to all 15 quartets in chronological order - a first for me - salute DDS at the end of the adventure. I was called in at a late stage to replace my good friend Stephen Johnson - now returned to reasonable health - in talks before each of the concerts. Toasting him with a 'present absence', including a two-stringed instrument set up by Yuko to save damage to her own instrument in the Thirteenth Quartet, where Shostakovich requires each of the players to 'play on the belly with the stick of the bow' during the boogie-woogie centrepiece. As it turned out Elizabeth Wilson, doyenne of the best single book on the composer, Shostakovich Remembered, was also coming for two events and was quite happy to share my burden, so I kicked off with the introductory talk and then we alternated. Jim's and Jenny's magnificent series of events also included David Rudkin talking on the screenplay of Tony Palmer's Testimony film, Alan George of the Fitzwilliam Quartet on meeting Shostakovich. Robin Ireland - another Fitzwilliamite - giving a masterclass with the Dunev Quartet of the Royal Birmingham Conservatoire (the part I heard dealt with the second movement of the Eighth Quartet, and he really got them to bite into it) 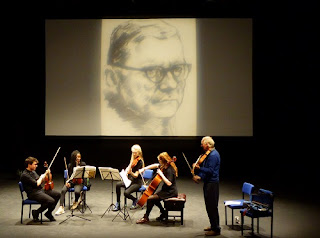 and David Fanning and Michelle Assay linking the quartets with the two Kozintsev Shakespeare films which Shostakovich scored so hauntingly. Later that Sunday afternoon I chaired a forum with those of us talkers left by then, and it was such fun. Here we are at the end of the marathon. 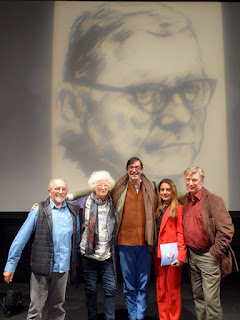 Two more here: one of Liza with Yuko, who know each other well as players, 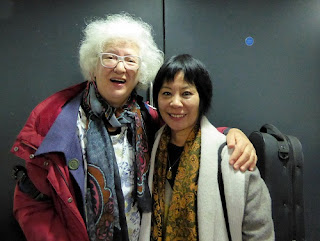 the other of David and Michelle with Richard. 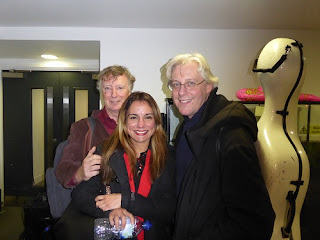 Liza I liked tremendously when I met her at Bard College's Shostakovich symposium 14 years ago, and though I'd not seen her since, we had a lively e-correspondence. Now, I hope, we're proper friends. It was such a bonus that she was giving a lecture at Pushkin House the following Tuesday on the extraordinary pianist Maria Yudina, whose biography she's preparing, and that turned me on to a great artist of whom I'd previously heard too little. Just listen to this performance of Bach's Chromatic Fantasia and Fugue.


Yudina led a fascinating life, a human being of total integrity who somehow escaped prison, though not punishment, under Stalin; a holy person always short of funds because she gave all her money away; an interpreter who, though superlative in Bach, had the curiosity to seek out the contemporary, not least Hindemith and Stravinsky (her Serenade and Sonata are also among the best performances I've heard). Can't wait for the book. 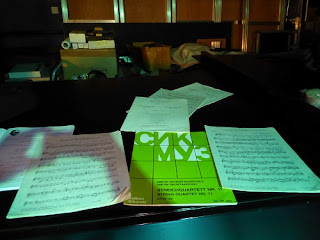 But back to Shostakovich. Although I can't say the cycle as a whole was quite up to the mark of the Jerusalem Quartet's Wigmore series (of which I missed one), and though Krysia swapping roles with Oscar didn't always yield the best results, these were sensitive and perceptive musicians attempting the Everest parallel to the Beethoven series for the first time, and I found so many revelations. Chiefly, I'd say, in the Ninth and Tenth, the Passacaglia of which was the highlight of the cycle for me (it's the quartet I knew least well). Plus Richard's sounds in several dying falls were so unearthly. Remember too that most quartets break up their series over a season, so it was hardly surprising if there were points of tiredness: it was as much a test to themselves as a gift to us that the Dantes undertook the odyssey. 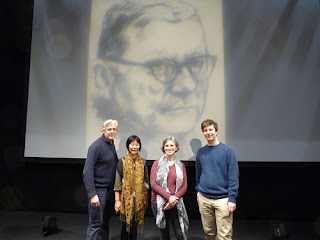 Liza spoke before Quartets 2 and 3, then 7-13, with such lucidity in journeying through each work (she knows most of them from the inside as a fine cellist). My approach was to link to other works contemporary to each of the quartets in question, so the recorded excerpts avoided what we were about to hear. I handled 1, 4-6, 14 and 15 - with gratitude to EW for highlighting the quote from the slow movement of Prokofiev's Second Quartet in the Lento of the Sixth Quartet, a 1956 homage to the colleague who had died three years earlier on the same day as Stalin. 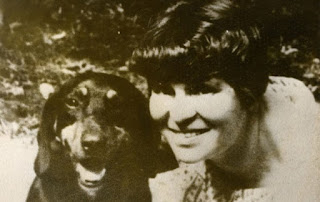 I had to hand the reference to Shostakovich pupil and love-object Galina Ustvolskaya's Trio for clarinet, violin and piano of 1949, but I'd never thought of its first careful placing -fff, espressivo - at the height of the first-movement development - as opening a space in the high wall of the last Stalin years. Though it's a severe theme, could this be Ustvolskaya keeping DDS sane in extremis? 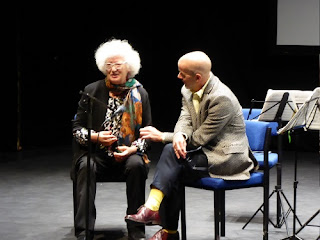 In conversation with David Curtis of the Coull Quartet and the Orchestra of the Swan, Liza gave us so much chapter and verse about her meetings with Shostakovich during her years as a young cellist under Rostropovich's guidance at the Moscow Conservatoire from 1964 to 1971. Two memories in particular struck me. One she mentioned in Shostakovich Remembered, but not in quite such poignant detail as this - namely, that DDS had arranged a private hearing for Britten and Pears in his apartment of the Thirteenth String Quartet. She was present, mostly as interpreter (and her family already had connections with Aldeburgh, so she knew Shostakovich's English counterpart). At the end of the short but harrowing performance, Britten went down on his knees in front of Shostakovich, kissed his hand and asked to hear the whole thing again. 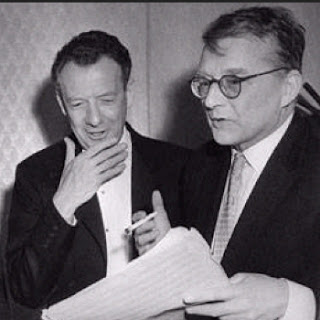 The other memory which brought tears to my eyes was that the students all knew DDS - he always had time for them - but when they saw him in his later illness attending public performances, where he would always insist on getting up with much difficulty to greet people he knew, they tactfully took a longer way round so as not to pass him and put him to that trouble. Anyway, here's Liza with Rostropovich in a photo from that time. 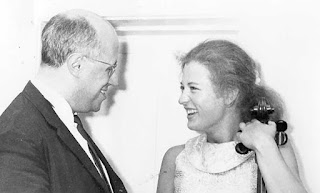 If anyone doesn't own Liza's book - or, indeed, her scrupulously researched and honourable biographies of Slava and Jacqueline du Pré - I urge you to rectify the situation. At the Pushkin House event, I was talking to Rosamund Bartlett and we were talking about how we both bought the book when it came out, but were equally thrilled to own the second edition, where EW, clearly urged to expand her considerable musicological knowledge, writes more about the works themselves. Anyway, there is no end to what we can learn about these great masterpieces. 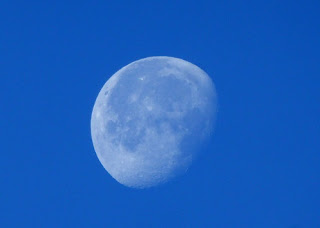 Accompanied by a moon still visible on the Saturday morning of the weekend, when it briefly snowed as I dashed across from hotel to arts centre, I love to quote, as EW does in Shostakovich Remembered, those Michelangelo lines which Shostakovich set at the end of one of his own last monuments.


Here fate has sent me eternal sleep;
But I am not dead: though buried in the earth,
I live in you, whose lamentation I hear,
Since friend is reflected in friend.

I am as though dead, but as a comfort to the world,
With its thousands, I live on in the hearts
Of all loving people, and that means I am not dust;
Mortal decay cannot touch me.
Posted by David at 16:05

Your moon and the Michelangelo lines at the close are tremendous, and so poignant. How thrilling this had to have been! The story related from Elizabeth Wilson of the private performance is treasurable. I can't begin to imagine what it would have been like to be witness to Britten's homage. How wonderful that Elizabeth W. was there and has reported it, so that it is not lost to time. Her book is a cherished possession of mine, and all thanks to you for noting it to me.

Liza is an amazing witness to musical history, as well as a total Mensch. And her daughter, whom I met so long ago at Bard, is doing invaluable work for refugees' rights in Leeds.

Do you know the last of the Michelangelo settings? Shostakovich uses a toybox tune he supposedly wrote at the age of 9, turns dark in the middle of the poem and then brings back only the accompaniment of the tune, fading into infinity. He always knew how to end metaphysically...

I do, though certainly not as well as you do, not by a long shot! You sent me back to a post I wrote after listening to and reading about these wonderful settings. (Needless to say, Elizabeth Wilson was a key source.) This is what I wrote in that post:

Yet there is one more setting, Immortality. For this setting, Shostakovich chose two epitaphs (190 and 194) from a set of forty-eight [Saslow 3] that Michelangelo wrote to commemorate the death of the 16-year-old nephew of his agent, Luigi del Riccio. Del Riccio had asked for a portrait, but Michelangelo didn’t like portraiture and offered the epitaphs, a sonnet, and a madrigal instead. [Saslow 20] Del Riccio seems to have showered Michelangelo with gifts to entice him, prompting Michelangelo to accompany some of the epitaphs with wry comments. To Epitaph 190, Michelangelo appended the note, “When you don’t want any more of these, don’t send me anything further.” [Saslow 350] He accompanied Epitaph 194 with the note, “I didn’t want to send this one to you since it’s very clumsy; but the trout and the truffles would compel heaven.” [Saslow 356]

It’s hard not to laugh, despite recognizing the solemn occasion that caused the writing of the epitaphs. It’s even harder not to laugh when listening to the mad-cap toyshop tune that opens Shostakovich’s setting, taken from a piano piece he wrote when he was nine. The setting increases in gravitas as it proceeds, but an echo of the toyshop tune sneaks in again at the setting’s close.

. . . descriptions of the first movement as a toyshop, a picture of a childhood with unclouded skies, or as a protest against death all serve more to confuse than clarify. In fact there is as much of the enfant terrible as the innocent child in the music . . .”. [Wilson 493]

Much the same might be said of Shostakovich’s musical vision of Immortality.

Fine observations. I was struck by a conversation between conductor Kirill Petrenko and Bavarian State Opera intendant Nikolaus Bachler in the interval of the livestreamed Otello (still on the site until 12 noon GMT tomorrow), in which they made clear that in all great works the dialectic between the simple and the complex, the dark and the light, is always present. That certainly applies to the first movement of the Fifteenth, which seems to take us from childhood to the brink of death in less than a quarter of an hour; then the rest of the symmphony is about that death and the final possibility of returning to innocence. The ambivalence is there in the final Michelangelo settting too. I listened this morning to an LP I bought recently of the first recording for voice and orchestra, with the great Yevgeny Nesterenko.