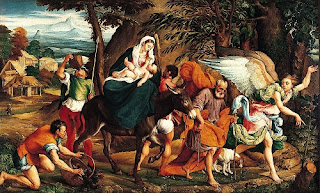 The more I hear L'enfance du Christ, the more I love it. So I'm glad to have taken the chance of the BBC Symphony Orchestra's latest performance - the previous one, six years ago, was also miraculous - to hold a class on the afternoon of the concert. One thinks of Berlioz as a lopsided master in the larger-scale works - or at least I do when it comes to Roméo et Juliette, still the high watermark of his most futuristic orchestration, and La Damnation de Faust - but there is structural perfection in this 'sacred trilogy in three acts and seven tableaux' (the score, surprisingly, is peppered with revealing stage directions, though I wonder if that has to do with the belated 1911 staging mentioned on the title page). 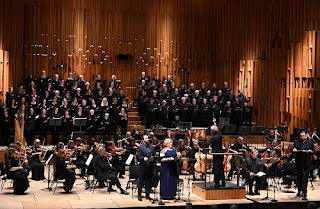 Its force turns out to have been centripetal. The anecdote of how the Shepherds' Farewell originated in a few bars of organ music inscribed in a friend's visitors book when Berlioz was bored by the others playing cards is well known. Bang at the centre of the work, it acquired movements either side for the little miracle that is now Part Two, 'The Flight into Egypt'. 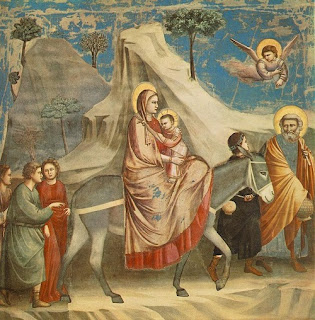 Then, with the encouragement of Leipzig success, followed a sequel; and finally a prequel, the daring idea to start in darkness with the psychology of Herod, the uneasy ruler, adumbrated by three trombones and then two trumpets and two cornets for a brief climax of violent fanfaring before all the brass bar the horns disappear for the rest of the drama. Matthew Rose was at his most engaged in the Barbican performance (in the second of three photos by Mark Allan), and sounds very handsome indeed in the broadcast, unmissable on the BBC Radio 3 iPlayer. 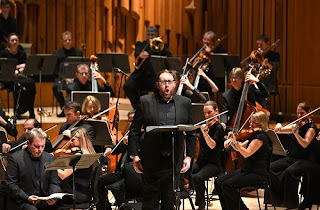 I love especially the idea, realised in both BBCSO performances, that the worst, the bass role of Herod, should be doubled up with the best, the Ishmaelite carpenter who welcomes in the refugee family in Sais, Egypt, when all others have turned away the 'vile Jews'. Isn't this, even more than the Bethlehem story, the ultimate message for our time, compassion for strangers in need? Musically, it's underlined by the most anguished movement, with Berlioz's hallmark wail of diminished sixth to fifth, giving way to the beautiful bustle of the Ishmaelite household orchestral fugato and the exquisite ease of the trio for two flutes and harp which is especially striking in concert when, their labours nearly over, the rest of the performers can just enjoy the virtuosity and grace of a consummate handful? 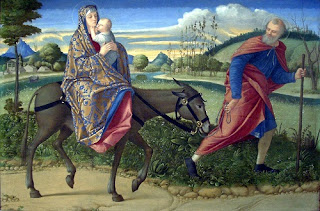 And then that final, unaccompanied chorus, in which the fourth dimension - the angel choir that concludes each part - begins a descending-scale Amen twice completed by the tenor and the onstage chorus before the last benediction, pppp. This is Berlioz's gift to be simple in his own unique way; and how much he adds, in this most delicately scored of his works, to give a twist: the F to F flat within the A flat serenity of Mary's first apostrophe to her child, the orchestral coda of that number which reminds us of the bitter undertow to all the sweetness. 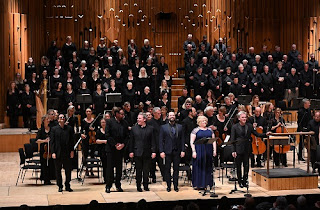 How wonderful, then, that the last major concert of the year I heard should have been Ed Gardner's loving performance. This work brings out the sensitivities of those singers who have a special dedication - especially true of Karen Cargill (I'll say it again, the great Berlioz interpreter of our time), Robert Murray and Matthew Rose. You felt that all three were tapping into the essence, and in that the BBC Symphony players, that exquisite woodwind department especially, were their equals. The interpretation will be in my 'best of concert year' for The Arts Desk tomorrow; meanwhile, here's the opera retrospective.

Representations of the Flight into by Bassano, Giotto and Carpaccio
Posted by David at 15:24

To your question, "Isn't this, even more than the Bethlehem story, the ultimate message for our time, compassion for strangers in need," my answer is a resounding yes. As to the music, what a wonderful way to end your major concert year. Berlioz with Cargill had to be sublime.

Interestingly, just now I also visited another blog friend's post and, writing of the Coventry Carol, she states, "While our Christmas celebrations often romanticize a single stable, children born today into stables and barns, refugee camps, colonias, barrios, and slums around the world continue to suffer and die. They are defenseless, with few advocates, and their needs rarely are considered. Innocents in every sense of the word, they have done nothing to deserve their fate."

May the year ahead bring better, and particularly more humane, news.

I was going to put my CD of this on tomorrow - Davis with Baker, Tappy, Langridge, Allen et al. It is a tradition in our household between Christmas and Epiphany. However on your good counsel will listen to the BBC broadcast. It is a work I've always loved.