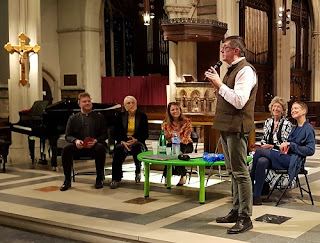 It was the best possible conclusion to an Opera in Depth term where I'd taken students through five Monday afternoons on Stravinsky's The Rake's Progress - around an excellent concert staging conducted by Vladimir Jurowski - and four on Tchaikovsky's The Queen of Spades (Herheim's wacky Royal Opera take in the offing). Two of my guests, Dame Felicity Lott and Nicky Spence, had already been generous visitors to the class, and the trajectory of what became a modest fundraiser all flowed serendipitously from FLott's urging me to see the latest Rake from British Youth Opera, of which she is President. It was a beautifully prepared and staged experience, and our former Anne Trulove certainly wasn't wrong about the latest, young Australian Samantha Clarke, ready to sing this and other roles in any opera house around the world. 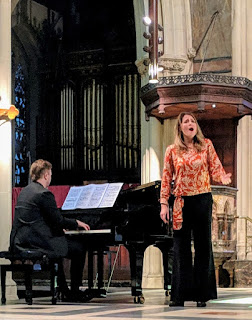 Sam crowned our afternoon with a superlative performance of the big aria and cabaletta 'No word from Tom', including a spine-tingling messa di voce on 'it cannot be thou art'. Perfect meaning in every phrase, perfect technique. The singers and conductors I've spoken to who know her all speak so well of her. Tall and beautiful, she really could be the next FLott. Her next role is one of that lady's specialities, Helena in Britten's A Midsummer Night's Dream, at the Guildhall, where she's still studying. 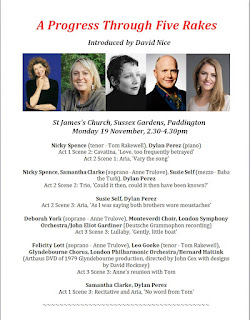 Nicky Spence kicked off our afternoon with Tom's two surprisingly emotional arias, 'Love, too frequently betrayed' (I.ii) and 'Vary the song' (II.i - click on the programme above to see the details better), followed by the plangent II.ii trio (effectively a Donizettian duet punctuated by Baba's indignant commentary from within her sedan chair). Having flown in from Brussels, where he'd been reprising his role in the extraordinary production of Janacek's From the House of the Dead we'd seen at the Royal Opera, Nicky had to be off after an hour, which is why he's not in the top pic (left to right, his partner, superb pianist Dylan Perez, Susie Self, Sam, FLott and Debbie York. Thanks to David Thompson for that photo, David Zell for the other church shots). 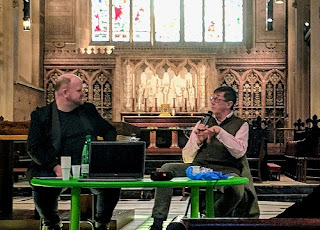 Tom is a tough role, not for the average 'pipsqueak English cathedral tenor' - a phrase I once used for which one of its targets, rightly, will never forgive me - so Nicky's casting in the BYO production of 10 years ago was astute (his first major Wagner role, Parsifal, is scheduled for York Minister this coming Easter, with Mark Elder conducting). The company, as Execuitve Director David Balcombe told us in his speech at the end, had more than 400 auditionees for the principle roles this year, and they never plan an opera they know they can't adequately cast. Glad to have raise a goodish sum to hand over to them from this event.

I wish I'd recorded the chats, because I can't remember all the details. But Susie was certainly amusing about how she dealt with David Freeman's penchant for asking his singers to take off their clothes in auditions. She was a wonderful, hairy-chested Baba in his Opera Factory's 1994 production of Rake, and delivered her patter-and-vengeance aria with aplomb. 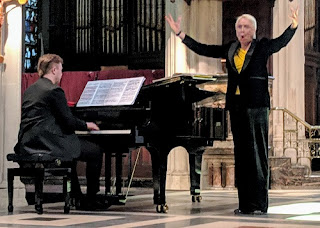 Debbie York was plunged in to John Eliot Gardiner's 1997 LSO concert Rake with very little preparation, and the recording followed frighteningly close on its heels. I only revisited the performance recently, and the freshness of her Anne is so touching (wonderful account of the big aria, too). As she, too, had arrived from elsewhere - her home city of Berlin - and at the crack of dawn, she preferred to have the Lullaby played, which gave the infinite benefit of the flutes which accompany it and those heart-rending choral interjections.

We also watched the whole of the Anne-Tom scene with FLott and Leo Goeke in the 1979 Glyndebourne film (praise be to Thames TV for filming so much in those early days of televised opera). FLott had worn a dress appropriate to Hockney's cross-hatching and brought along a photo taken just after the filming featuring her, director John Cox and Hockney. Talking with her was a delight, as it always is - such a generous and supportive person. 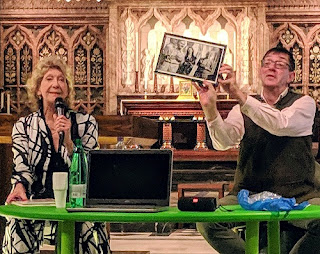 And, of course, there was something very touching about the legacy of two Annes and the handing-on to the next, an almost Rosenkavalierish acceptance, as one of the students later wrote. We had a jolly final panel, and after a lot of friendly after-chat, went our separate ways. The chances of getting that group together again are thin indeed, but we did it. Warmest thanks to all for giving so generously of their time, and to the very helpful folk at St James's Sussex Gardens, Father Owen Dobson and Sue Silkstone.

Another ultimately happy chance that led us to St James's was the  Frontline Club powers' decision that they needed the room we use in 'the run-up to Christmas', which suddenly included the whole of November. So I booked St James's for the concert and Pushkin House in Bloomsbury for the other two classes concerned. Now the corporate-hungry new 'look' at the Frontline has determined that, in spite of the fact that I pay them very good money for my weekly two hours, they might be able to make more, so one-third of the way through the 'academic year', I was told to find somewhere else. 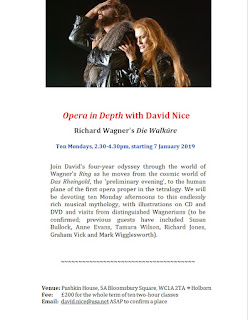 Fortunately the staff at Pushkin House were so obliging, the equipment so good, that I've relocated there. I shall miss the bar folk at the Frontline and the pleasure of the venue, but things went downhill administratively after the departure of Ian Tesh, for whom nothing was too much trouble. So, onwards to ten Monday afternoons on Die Walküre in the second year of our Ring journey. If you feel like joining us, click on the above for details.
Posted by David at 08:16

Nice to read about this discussion of TRP, which is one of the operas that so desperately needs to be done here by OTSL, as OTSL has never done it. Part of me wonders if this is because TRP is so associated in the USA with Santa Fe Opera, and since OTSL is kind of the red-headed stepchild of Santa Fe Opera, maybe that scared the first two OTSL general directors off a bit (each of them went on to helm Santa Fe Opera post-John Crosby). I've put the idea in the new OTSL general director's head here, and I know at least one SLSO musician who agrees emphatically that we need to stage it here. Hopefully one of these days, prior to the apocalypse.

BTW, somewhat off-topic, I saw also your TAD review of the Weinberg concerts with the CBSO and MG-T. That review unfortunately seems to have vanished, but wanted to say that it was great that you got to hear those concerts. I don't think that anyone has taken up the flag for Weinberg here yet.

There was a glitch with a couple of TAD reviews disappearing. and no-one has yet worked out why. Dispiriting, but I had saved the text so spent some time putting it up again with the same link. Anyway, this should work: https://www.theartsdesk.com/classical-music/cbso-kremerata-baltica-gra%C5%BEinyt%C4%97-tyla-symphony-hall-birmingham-review-numb-laments

We've been so lucky with Weinberg, having had The Passenger staged at ENO and The Portrait at Opera North. His big champion here is my good colleague David Fanning, who's writing a biography for Yale. We get ALL the quartets in Birmingham in January - I'm hoping to go up for total immersion. He's a very uneven composer, but genuine and often powerful.

Here TRP is very mainstream, thanks mostly to the many revivals of the Hockney-designed Glyndebourne production since its first appearance in 1975. Of course it's very timely with its leitmotif of Get Rich Quick rapacity.