Following his final performance as the best Music Director of English National Opera in my memory, Mark Wigglesworth paid another visit to my Opera in Depth class at the Frontline Club in November. 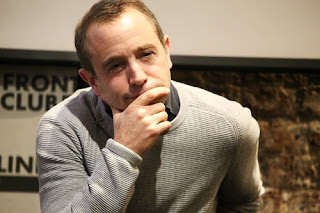 Student Frances Marshall, a professional photographer who recently took stunning photos of the wedding of a certain bass friend and the Salzburg love of his life, brought along her camera and caught a couple of great shots, including the one above, which another visitor, Susan Bullock, thought was Mark to the life - pensive, deep-thinking.

More recently, spending what now turns out to be nine glorious Monday afternoons on Der Rosenkavalier, we were blessed to have Dame Felicity Lott coming to talk Strauss. Distinguished film and documentary maker David Thompson managed some pics from his seat front left. 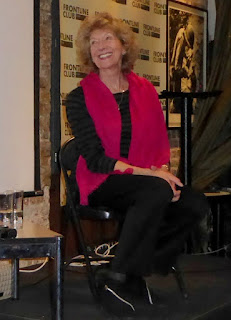 And last week Richard Jones returned with typically off-centre thoughts on his Glyndebourne Rosenkavalier. This photo is of a previous visit as I didn't want to wear him out with student paparazzi. He's a lot smilier these days, so wry and funny. 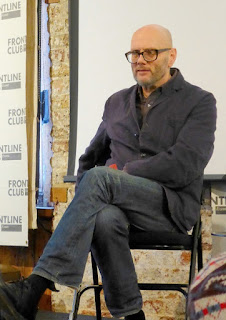 Fortunately the wisdom of all three is captured, with their consent, on my mp3 player - I hope I'll have cause to revisit and transcribe some time. The main thing to mark is the departure of Messrs Wigglesworth and Jones from the ENO fold - the present CEO hasn't earned the respect of either, and should be ashamed of herself for letting them go. So much to lament here. This season's Don Giovanni was their first collaboration, and while Mark is never lost for words to praise his colleague, Richard said he was - adding only, 'what class'. When he said that he wouldn't tackle the other two Mozart/Da Ponte operas, I asked him, not even with MW? Oh yes, with him, definitely, came the reply. We've also lost the collaboration on The Gondoliers - a work Carlos Kleiber longed to conduct at ENO, gospel truth - and Elektra. 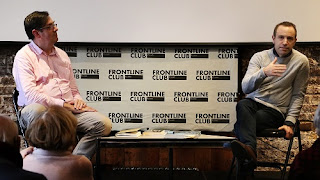 FLott still has the performer's instinct - she's havering over whether to play the Devil in a Belgian company's Stravinsky Soldier's Tale, in the French she speaks so beautifully, and to see her react to recordings of Crespin and Lehmann, as well as the recording she made of the Rosenkavalier Trio with Dessay, Kirchschlager and Pappano, was very, very moving. So were her readings of three texts I'd translated. Memories of C Kleiber were so precious - always the greatest for her, as well as for the rest of us watching their Vienna Rosenkavalier on DVD. No wonder she can't tolerate slow, maudlin tempi for the Marschallin. He used to sign himself 'Uncle Greifenklau' after the relative the Marschallin tells us she's intending to visit. Huge fun - he looks it on screen - and very amusing anecdotes, including one about Pavarotti replacing the usual Italian Tenor for a performance. You can imagine he didn't take to the Kleiber style.

It's also encouraging to hear all three guests speak so warmly and enthusiastically of the best young performers coming through the ranks. FLott had been giving masterclasses at the Carnegie Hall under Marilyn Horne's guidance, did a wicked impersonation of a young soprano hitting that rapturous Strauss Lied 'Cäcilie' as if it were a nagging lecture, complete with witchy finger-jabbing. But clearly she's kind and supportive to the talented. It will do the wonderful Miranda Keys good to know how much FL admired her Duenna, and of course she's a great admirer of Louise Alder, now learning her trade in Frankfurt. The future is golden, so long as there's financing to follow it.

Which allows me to slip in a photo featuring some of my favourite twentysomething musicians. The Philharmonia Friends in the interval of Paavo Järvi's utterly engaging concert with the Philharmonia the other week didn't know what hit them when youth and beauty, a mixture of Estonians and Brits, stepped into the Level 5 reception room. The lights of the former Chelsfield Room turned them green, so I made the pic black and white (the focus isn't great as we were being hurried back to our seats and the flash wouldn't go off). 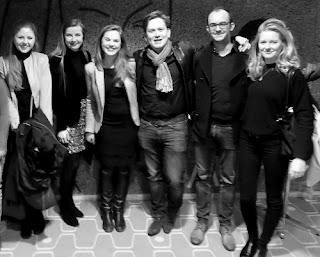 Here are three violinists - Marike Kruup on the left and her partner Benjamin Baker, second from right, as well as Jess Wadley next to him; a cellist turned agent, Maarit Kangron; a bassoonist who's also a brilliant organiser, Tea Tuhkur, my most delightful companion for the evening; and a cellist turned conductor, Jonathan Bloxham (also boyfriend of the glamorous Jess).

The programme deserves more than a mention. The first half worked at a level of communication and humour you don't often encounter, here in Haydn's Symphony No. 101 ('Clock') and Beethoven's Triple Concerto, a piece that normally loses me for whole swathes. No chance of that with Christian and Tania Tetzlaff making chamber music alongside Lars Vogt. If you sometimes strained to catch it, that was no bad thing. And what an absolute masterpiece the Haydn is, like all its late counterparts. 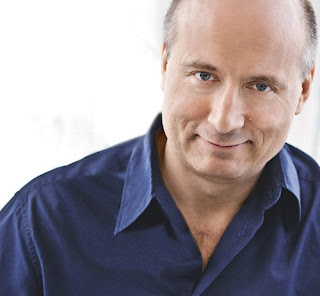 If Paavo's Nielsen Sixth (the conductor pictured above by Jean Christophe Uhl) wasn't the greatest performance I've heard live, that was probably because the Philharmonia, or at least its strings, needed another rehearsal or two to truly let rip. But as an interpretation, it brought out all the timely mania and discombobulation in this amazingly modernistic piece, a beacon, surely, for Shostakovich in his Fourth and Fifteenth Symphonies (though I've never found any evidence that DDS knew it).

But I digress. Back, finally, to the visitors. Jones's Rosenkavalier is returning to Glyndebourne next year - I already knew this - though directed by his very talented assistant Sara Fahie. He'd like to change quite a bit in Act One and wouldn't stay for the screening of the Levee, which he thinks needs more focus, though the students loved it. It was good to hear him standing up for Tara Erraught, and interesting to hear him say that it should have been Glyndebourne's responsibility to back her up; as he rightly points out, she has a fabulous gift for comedy, especially as 'Mariandel'. 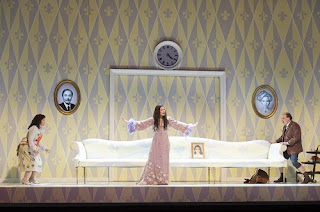 Sad to hear that the great Lars Woldt, perhaps the most lovable oaf of all Ochses, has retired from the role now. Here he is with Erraught, Ochs and Octavian being kept apart by Kate Royal's very attractive Marschallin - a photo by Bill Cooper of the 2015 production. The Feldmarschall in the left of the two portraits on the wall, by the way, is a former member of the stage crew, much admired by Richard, who took off for a year to travel round the world.

And then, of course, we went on to the end of the act with FLott and Von Otter, neither needing direction - nor did they get it from lazy old Otto Schenk - to communicate supreme eloquence, with Kleiber as the dramaturg. This version on YouTube breaks things up into 10 minute chunks, and there are no subtitles, but it does have the advantage of starting at the crucial soliloquy.


Three more glorious weeks to go, then all too little time on Rimsky-Korsakov's The Snow Maiden. Summer term will be devoted to Otello and Pelléas et Mélisande - contact me if you'd like to come by leaving a comment here with your e-mail; I won't publish but I promise to get back to you. Special guests TBC. Will Jonas sing the Moor? Kinda sad he cancelled the one concert in the Barbican residency I was going to - though as fellow critic Neil Fisher pointed out, 'I really can't wait to hear a tenor sing the Four Last Songs' is not a comment you're ever likely to hear...
Posted by David at 16:58

Do your students have any idea how lucky they are, David? Wish I lived in London and could attend.

I think they do, Helen, and thank you. Certainly their lively responses have encouraged speakers like Mark and Richard to return on several occasions.