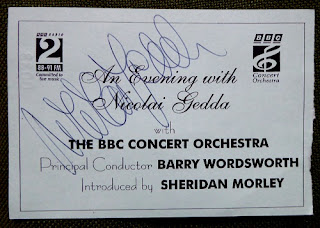 Not just the ticket with his autograph, in fact, but - more important - the intense memory of hearing him sing the most perfect of Donizetti 'Una furtiva lagrima's at the age of 72. Though there's no date, it must have been 1997. The researcher at BBC Radio 3's In Tune seemed rather pleased to have hit on that memory when she rang me up yesterday afternoon - I even took the ticket straight off the CD shelves in front of me to look at it while we spoke. My phone chat with the delightful Sarah Walker is here on the iPlayer for the next 28 days (at 40m15s), and there's an excerpt in a soundclip, presumably there in perpetuity, which they put up pronto after the live broadcast. Image below from the Warner archive. 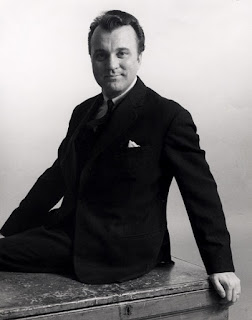 Had there been longer I might also have mentioned how he was on one of the very first opera LP sets I borrowed as a, maybe, 10 year old from Sutton Music Library. I'll be honest and say I was attracted by the cover, which showed Reri Grist's Gilda looking at Cornell MacNeil's stricken Rigoletto in a mockup of a renaissance room with bunches of fruit on the table (if memory serves). Gedda, of course, was Verdi's Duke of Mantua on the LP set.

Wish I'd seen Gedda on stage (only caught the concert and later the Bernstein Barbican performance of Candide in which the veteran NG played three small roles). Searching YouTube as well as CDs on the shelves, I found this interesting: two performances of Lensky's aria from Tchaikovsky's Eugene Onegin. The first - the one played, I believe on In Tune - was made when Gedda was 28, and is soft and intimate


while the second is much fuller, very stylish albeit matched to a poor quality and rather pointless film in which he's miming badly and seems to be addressing Zaretsky as the one he's saying farewell to rather than Olga.

Lovely tribute to a great singer. And thank you for the clips. I saw him several times in concert back in the early 1970s at Salzburg and then again in Ottawa several years later. My only experience of him on the operatic stage was in 1959 when the Met came on it's annual spring tour with The Gypsy Baron. Gedda, Lisa della Casa, Regina Resnick, and Walter Slezack in a dreadful English translation beautifully sung by all involved. And wonder of wonders I found a recording of it on YouTube. The sound isn't the best sadly.

At least you saw him in an actual performance (but then you are older, father William). What a cast, though, crikey. Never seen Zigeunerbaron staged - love the Overture.

This was an attempt to follow up on the success of Fledermaus and Perichole a few years earlier. Cyril Richard directed and the libretto was translated and much altered by Maurice Valency who included a role as Emperor Franz Josef for the great character tenor Alessio De Paolis. Act 3 included a ballet choreographed by Alexandra Danilova and Walter Slezack (Leo Slezack's son and a Broadway actor)appeared for the first (and last) time on the operatic stage. Valency had translated and adapted The Visit a year earlier for Alfred Lunt and Lynn Fontaine which was directed by Peter Brook which I was fortunate to see that same year.

Oh lord you are right - Father William is old and rambling down memory lane. Catch him before he steps in front of that tram.

Is that The Visit of the Old Woman? I so long to see a stage production. The film with Ingrid Bergman and Anthony Quinn is amazing, but it differs from the play in key details. Am hoping our Richard Jones would stage it some time.

Father Williams are valuable and repositories of vast knowledge/experience - I get a glimmer of this as I begin to realise I've seen so many things which were on before my younger colleagues were born. Keep writing and recording it...

Yes it was the last play that Lund-Fontaine did together though they did a few TV productions before they retired including a wonderful The Old Lady Shows Her Medals. Saw it again in Chicago when we were there looking for an apartment but it didn't have the same impact as the Lunt-Fontaine production. Sadly the movie changed the ending and I think much of the impact was lost.

Nevertheless it was my introduction to the drama and Bergman is absolutely extraordinary in it. The black and white cinematography is very impressive too. It's certainly not a happy ending...