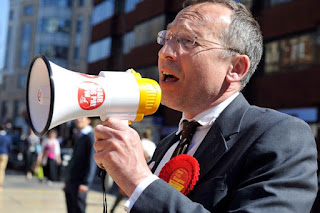 In the latest excellent edition of The New European (read online, or - better still - subscribe!), there was an article about 'the 25 MPs sitting on Brexit's faultline' who had not yet stuck their necks out in the forthcoming Commons vote on Article 50. I had already noted that our superlative local MP Andy Slaughter, the very model of a tireless worker for his constituency, was not on the list of Labour rebels; I wrote to him. I first got a 'wait and see' reply, but then, two days ago, the following.

As it is a public declaration, I'm sure it is fine to quote in full (I did ask, but no reply yet, and today's the day). His responses are always nuanced. And let's hope more folk on both the Labour and Conservative sides follow suit. I'm not that hopeful, but a united Europe is our only refuge at the moment as an open book, not a fortress, and I trust May's recent ill-timed opportunism will have left her rather more isolated.

RE: Why I am voting against triggering Article 50 in the House of Commons

Thank you for your e-mail regarding the upcoming vote in Parliament on triggering Article 50.

I am a passionate pro-European, who worked hard for the Remain campaign last summer and still believes our prosperity, security, culture and values will be strengthened by close relations with the rest of Europe, including through membership of the EU.

70% of the voters of Hammersmith voted to Remain.  I have always thought my first loyalty is to my constituents and thousands have lobbied me to vote against the trigger.  I also represent – though they could not vote in the Referendum or General Election – the 15% of Hammersmith residents who are citizens of other EU states and who are being shamefully held as ransom by Theresa May’s Government.

The Referendum result was close – we should not ignore the 48% who voted Remain any more than the 52% who voted to Leave.  Just as Governments – and MPs – represent everyone, not just those who voted them in, so we should now be trying to find a way forward that (almost) everyone can live with.

But none of these is the reason I will be voting against triggering Article 50.

Yes, the Referendum was a deeply flawed process with a narrow victory for one side, whose promises – most infamously the £350 million a week for the NHS – were abandoned as soon as the result came in. But no election is perfect, and issues of misrepresentation, turnout and size of mandate are often prayed in aid by the losing side.

The Supreme Court was right to give the decision on starting the exit process to Parliament rather than let Theresa May – herself unelected as PM – use medieval prerogative powers to make herself the sole arbiter.  But Parliament must have primary regard to the result of the referendum, the purpose of which was to express the view of the British people on our membership of the EU.

What has convinced me to vote against the trigger was the decision by Theresa May in her speech two weeks ago, repeated and expanded on since, that this would be not only the first but the final chance to influence not just whether but on what terms the UK left the EU.

I raised this issue with Theresa May at PMQs last week and her answer made it clear that she was not interested in consulting either Parliament or the British people on the final Brexit deal.

We are being asked to accept whatever deal Theresa May negotiates, with no alternative – except no deal at all.  We cannot say, sorry that is a terrible deal, go back and try again.  Or, as a final step, if she really is incapable of safeguarding our future, putting the decision on whether to go through with Brexit back to the electorate.

This is not about re-running the Referendum of last June, it is about giving Parliament or the people a say in the future of the country.  It is the least we deserve.  Anything else is not just arrogant it is fundamentally undemocratic.

Forces on the right of politics, in the Conservative Party as well as UKIP and the far right, have long dreamed of rolling back the welfare state, employment rights and even the NHS. They also have a barely disguised distaste for the inclusive, tolerant and diverse society that places like Hammersmith and Shepherds Bush, indeed most of London, represent.

These are not easy decisions and the arguments do not all run one way.  When we debate the amendments to the Government’s plans next week I will support those that give a real choice at the end of the process and I will make my decision on future votes depending on any concessions the Government makes.  Sadly, as I write, Theresa May looks like she has surrendered to Farage just as she shamefully did to Trump on the refugee ban.

Labour MP for Hammersmith
Posted by David at 07:15

I agree with most of your MP's letter, but would add two points. First the number of voters actually wanting to Leave was less than those wanting to Remain.....the majority for Leave was made up of protest votes, those that want to stuff the elite - the same protest voters who wanted Trump to do exactly what he is doing. This is one reason for having representative democracy and not referendums etc. This leads to the point that the leader of a party and PM should be elected by the MPs of that party. It is only those who work closely with a man or woman who know what the balance of his or her abilities is, and the basic nature of the personality. The Republican top guys would never have chosen Trump. The idea that everyone must have a say in everything and taking this as a definition of democracy is one of the main reasons, indeed probably the main reason, why the world seems to be going mad.

Agreed - referendums are a disastrous idea. Cameron only succumbed to one to try and appease the extremists in his own party. For that he sacrificed the entire country and is therefore the most blameworthy of them all.

Did you watch Ken Clarke's 15 minute speech yesterday? Only twice referred to notes, seemed to charm just about everybody and made some trenchant points, especially towards the end. Masterly. Clegg wasn't bad but Clarke's experience put him in a whole different league.

I agree about Clarke. But he does illustrate one of my points - that to achieve a political end it is not always best to broadcast one's views too firmly. Had he made more balanced speeches about the EU in the 1980s and 1990s ( despite his very pro-EU beliefs) he would have been leader - he won the vote amongst Tory MPs, but lost to the party in the country because of his EU position.

Ah, the chess game that is politics...

My own MP ( for Cambridge) is taking exactly the same line as yours. One difficulty was clearly stated by Osborne - that if the Commons voted against Article 50 the alienated would be even more alienated. The underprivileged hate the elite and were tremendously happy after the referendum,not especially because they wanted to Leave, but because they had slapped the elite in the face. " That shows that we can take decisions too " said one guy with great satisfaction after Leave won.

Even the terminally deluded should have learned by now that they were, not to put a polite face on it, screwed over by a far worse elite than the ones they wanted - with some justification - to slap in the face.

There would be the opportunity to learn from the mistakes of the dismal campaigns and try and clarify to people what they would be losing - in Sunderland's case, the E300m regeneration fund from the EU which went some way to stopping the rot caused by an uncaring Tory 'elite'.

The "uncaring elite" were and are much wider than the Tories.Anyone in the "Establishment" is distrusted to the point of rejection. Look at the attempts to find a chair for the enquiry into child abuse, and the hostility to Elizabeth Butler Sloss who would been ideal as chair ( who of course as a separate matter had to withdraw since it was discovered that her late brother had been involved in the matter.) and then to the former Lord Mayor. Facts matter little to the alienated, or those who feel alienated. Some Tory voters I know in Liverpool hate London - so rich and successful and self satisfied. "All those people in London drinking their glasses of wine and champagne* said one woman on TV from further North. If you bring forward figures such as those you mention they will not be believed - recall the figures from the Bank of England which were dismissed as coming from a source I would call expert but the alienated would call tainted - and fudged to support the happy and selfish life of the elite.But I would agree that the only way out of this mess is to have another referendum, though one cannot be at all sure that the result would be different. And in the States Trump's supporters are delighted that at last someone is doing the right things.

I saw the hashtag #brexitmeanstrump for the first time again. Nailed it, sadly.

I'm grateful to see, in these times, any public official hold tight to rationality.