New Year on the ward 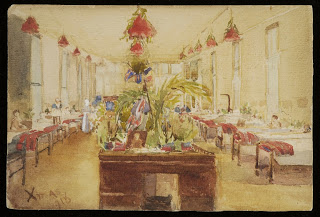 Entering my ninth day in a ward (I'm told not to name it) of Chelsea and Westminster Hospital, which makes me the oldest lag. And what haven't I seen over this period, waiting for my temperature to go down so that the tube and bag from my left kidney, infected from another trapped stone - for the first incident in Turkey, see here - can be replaced with a stent.I pick up fragments of stories from patients in the other five beds - huge imaginative possibilities even when surface-undramatic. 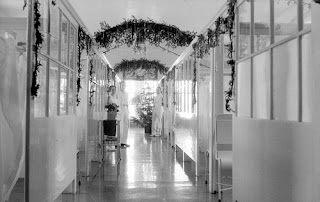 First we were three, a quiet far eastern Christian with friendly visitors, an equally quiet Muslim gentleman who had imam's prayers sounding from some device at the key times of day and his head bandaged from an assault (racist? It seemed unlikely he'd get in an attack himself). Next to join us, a dude with a manbun and a hand injury that required plastic surgery. Lived behind the screen rattling away in conversation with his girlfriend for 10 hours; when they snuck out, I knew it was for his daily cannabis fix despite explicit instructions from the medical team that he mustn't smoke anything. The next day it all went wrong between them after one such excursion - a barrage of French expletives from him drove her away, then she tried phoning the desk, and he said he wouldn't speak to her because she was drunk. He left the following morning, unaccompanied. 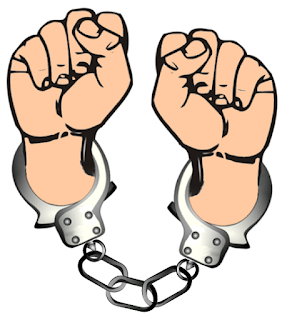 Supreme drama: 5.30am, a manacled maniac loud with apparent pain, two police officers at the foot of his bed. At 6 I couldn't bear more and went and sat in the telly room while he kept setting off the alarms and causing further havoc. I was stonewalled when I asked if they couldn't give him powerful enough sedatives. I only got a fuller story from a nice nurse three days later: he'd been arrested in possession of a knife and cocaine, and as soon as he was locked up immediately 'developed' this agonising pain. Obliged to take it seriously lest they had a death on their hands, the police brought him here, tests were made, nothing found. Interesting how he quickly moved from imprecations and 'you don't know what pain I'm in' (to me, when I finally said 'shut the f**k up', and I replied 'try me') to abusing the doctor who'd treated him and asking for his number (narrated the 'he took my trousers and pants down' with a demonstration the screen thankfully prevented me from seeing. 'Stop, sir, there are other patients here,' said one of the patient policemen. He was treated with remarkable courtesy by the professionals, not by me). Drug addict or psychotic or both? We shall never know, because finally, at 11.30am, he was carted back into custody and peace reigned for a bit. 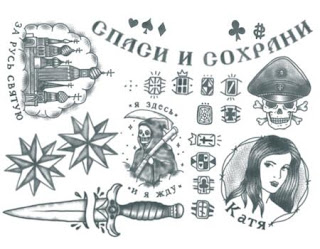 Nights are never quiet here, yet I could only feel relieved that the next admission to that bed didn't arrive, similarly, until 5.30am and proceeded to retch violently for the next few hours. Skinny, shaven-headed and tattooed in black like a Siberian prisoner, he seemed gentle and soft spoken, though in major medical trouble. A couple of hours into New Year's Day, he apparently took out all his tubes and left. The nice bay nurse for the next stint established from his wife that he'd gone home, but he had to be readmitted that night (though not to our section).

His neighbour was a gentle youth from a posh family, possibly 17, well tended by his nice girlfriend. Returning from his appendectomy, his skin was the pallor of the poet in 'The Death of Chatterton', so Chatterton he became among us. 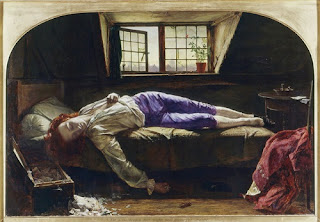 Moved to a bed by the window of the bay at the other end of the ward, I'm now in what is otherwise a geriatric ensemble. My hero is old John, 94, admitted with a fractured skull after falling over, believed by his two daughters to be at death's door ('come and see him, he may not last' was one phone conversation). The next morning he was up, asked to shave, decided to take sugar in his tea because it wasn't very nice and talked about receiving 'the Bishop' in his home for the weekend's church assembly. Difficult to converse with him because he keeps his hearing aids out until the daughters arrive in the afternoon. Wish I could have done so last night, because a Chelsea Pensioner newly admitted, loving to talk about the army and how he laid communications for the British army in Afghanistan, had a screaming cough accompanied by groaning all night.

The rest of us are quieter. I so like my genial neighbour, such a nice man, and even the querulous gentleman opposite him who is giving the folk here a very hard time is well-intentioned towards the rest of us. But how he snores! Last night I discovered this,


and it smothered all noises other than the screamcoughing. So I still only got two hours' sleep. Well, on to the end of Elena Ferrante's Neapolitan quartet, which has been an ever-increasing source of wonder, and to the conclusion of another teatralogy, the BBC Radio 3 broadcast of Götterdämmerung Act 3;  yesterday was the first when I actually wanted to listen to music. Meanwhile I wait for my temperature to stop 'spiking' before having any chance of going home.
Posted by David at 12:05

Wishing you a speedy recovery. All best wishes to you.

Thank you, Laurent, and especially for refraining from 'Happy New Year' - it can realistically be called a 'Convalescent New Year'.

Very unpleasant David .
It is called been ill.

And the need to have private health insurance.

Yo are experiencing democracy in action. .Life post Russian revolution.

I had it for two nights two years ago before moving to my private hospital.

Name ward if you want to.

You are not living in village Russia.

I am sure it is a fine hospital it just the other patients.

If I had to post one of the emoji things to indicate how to feel about this post I'd be at a loss. At times I want to laugh, other times cry and quite often feel angry. Then I realized that the old heart would have done fine. Sending all those hearts to you, J and them as what's looking after you. As always you painted a picture of what's happening around you with wit though this is not a trip I want to go on with you.

Big, but gentle hugs from this side of the ocean for a speedy recovery.

Good grief, what a change of year you are having. You have the makings of a brilliant novel here, though one I suspect you’d prefer not to live through it as you are, let alone write about later. Weak remedy though they might offer, we send you all the very best wishes for recovery and escape from your current environs.

I do support the NHS as a principle, and it is wonderful that it saves so many people's lives. In big things it is superb. The people who work for it are mostly dedicated and heroic. But I see so many flaws and false economies going on here, chiefly in the strict demarcation of roles and the shocking lack of attention to hygiene (the bathrooms can get filthy; the company to which the work is contracted out cleans them only twice a day, and fails to send anyone if there's a mess. The nurses aren't allowed even to pick up detritus left in them). I'll list all the defects in another post.

It was J who said I should remove the name of the ward and the nationalities involved - privacy protection etc.

Willym, mixed emotions are very much what I feel. I only wish things that happen here didn't keep raising my blood pressure.

Sue, it was exactly my thought that a novelist with a fine imagination could spin this into gold. I wish I had that sort of imagination!

Thanks to all for good wishes.

Sorry to hear that, Mr Nice! Nine days! I wish you full and comfortable recovery!

Thank you, Jan (David, please). At least five days to go. I feel perfectly well but a temperature still needs reducing. They've found the source which means another horrid 'intervention'.

Wishing you well, David. Your evocative snippets reminded me of something I read about the novelist William Trevor: that he loved sitting on park benches just long enough to pick up a scrap of a story sufficient to prompt his imagination before getting up and moving on to another bench. I'm sorry that the analogy breaks down in as far as you don't have the option of mobility, but I hope you're comfortable and discharged very soon.

Thank you, John; I'm lucky in that it just happens around me. Plenty of ins and outs so the stories accumulate. I am currently stricken for 94 year old John, who had a good day yesterday - the members of his Iranian Anglican church came to see him, and he is 100 per cent lucid when he speaks, but in the night he fell out of bed twice. Heartrending.

Well - that sucks for New Year. Which is actually a ridiculous comment because it would suck at any time of the year. Sounds like you are "keeping cheerful" and "making the best of it' in true stoic fashion. You've turned the ordeal into an entertaining commentary on closely observed humans. Really hoping this trial by hospital ward and kidney end soon and you are fully recovered. All the best David.

As one of the nurses said, it's never boring here if you enjoy the human scene. A watered-down version of Dostoyevsky's 'From the House of the Dead', but conducted from a position of prone more-or-less comfort. Thanks for the well-wishing. The one thing folk can realistically wish me is a 'convalescent New Year'.

Liam told me of your hospitalisation.
Get well soon

Thanks. Noel, all the very best to you. It's been too long.