Bucked up by The Valkyrie 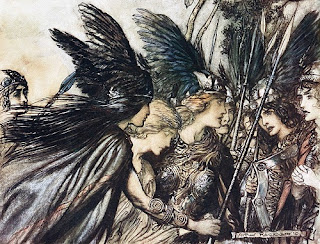 As the hospitalisation dragged on, I realised I'd have to postpone the start of my 10 Opera in Depth classes on Wagner's Die Walküre this term by a week. Of course coming home is often more tiring than you expect, and the stent is a nuisance, especially when you have to carry your class kit of heavy books and scores in a rucksack - I'm not up to cycling, probably won't be until after the op - but I felt I could battle that and found myself inspired by the preparatory reading. As I was by the musical side, at least, of the Royal Opera's Queen of Spades on Sunday afternoon, my first outing since I left C&W three days earlier.

I have on the shelves the Poetic and Prose Eddas in several translations as well as the Nibelungenlied, but I only recently bought the neat little Penguin edition of The Saga of the Volsungs which was Wagner's sole source for the tragic history of Siegfried's parents. 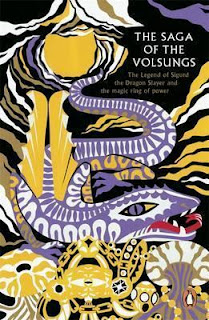 As always, one has to marvel at how he followed in the footsteps of the great mythic reworkers (Sophocles and Euripides, for starters) in adapting brutal material to a more compassionate end. You have to take your hat off to the warring, scheming women in this saga, but surely you draw the line at infanticide: Signy, the Sieglinde character, bumps off, or has bumped off, four of her children by a man she doesn't love, but Gudrun, the Gutrune character, takes the biscuit in serving up the Attila figure the hearts of their children on a spit. Pure Titus Andronicus.

So much for the great incestuous love story of the siblings who fall in love before they know (consciously, at any rate) who they are: Signy changes shape with a witch, goes in disguise to her brother Sigmund in the forest and sleeps with the unknowing hero, presumably to 'get with child' and produce something that will grow up to be a Real Man. That's not Siegfried; he - as Sigurd - is Sigmund's son by a third marriage some time after Signy has accepted her guilt in getting what she wanted and shuffled off this mortal coil. There are also several generations between Odin/Wotan and his beloved Volsung. Clever Wagner to make the terrible twins Wotan's own children. 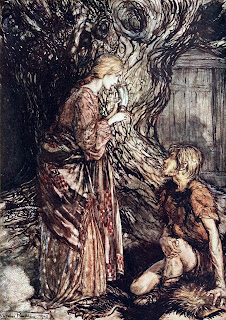 I always stress to students that most studies of The Ring deal too much with the sources and the libretto, and not enough with the music. If only Deryck Cooke had lived long enough to get to the musical side of I Saw the World End; the torso we have is still my primary secondary source, as it were. Which is why we're going through each opera, starting with Das Rheingold last January, scene by scene, theme by theme, highlighting all the most interesting musical transformations. But it was high time to get to closer grips with the original myths. Wagner left behind a seminal letter highlighting his particular interest in the Volsung Saga before recapping his method of writing the 'book' backwards and then the four operas in chronological sequence. 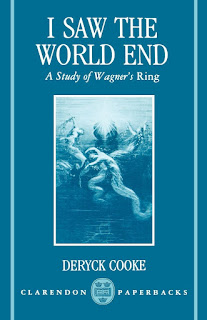 So far we've only taken Siegmund through the storm. The opening has to be more running than trudging through mud; some conductors just don't get it, but Karajan and Böhm are superbly graphic. More minimalist music, unmodulating for a while, just like the Rhine Prelude and the Entry of the Gods into Valhalla. You could - and I did - spend half a class just talking about and illustrating that, with its roots in Rheingold. I also traced the major themes of the act as they unfold in Siegfried's Funeral March. There I chose the other extreme - Reginald Goodall's first recording of excerpts from the final opera with what was then the Sadler's Wells Opera Orchestra. The brass playing is in a league of its own.


Next week - on to the lurve. Anyway, it's so good to be back in Pushkin House, with its helpful staff - shame about the decadence of the Frontline Club after Ian Tesh's departure, much as I love the place - and to feel the support of my wonderful, responsive and devoted students. It's not too late to join us - e-mail me at david.nice@theartsdesk.com if you're interested, but you might also feel like signing up with the Wagner Society of Scotland for its Trossachs retreat in September. The good news is that after stepping in at the last minute in 2018 and proposing Rheingold because I had already prepared, I'm booked for the next three years. And I won't simply repeat myself up there - so much thinking about Wagner always goes on between engagements.
Posted by David at 10:44

David, do you see any difference ( that is, a fundamental difference) between the response in emotions and ideas to Wagner as compared to the Electra of Richard Strauss (I chose that opera deliberately)? If so, what is the difference?

Too complicated an issue to answer here (you do always veer off at a tangent). We'll talk about it some time. Basically, though, no Wagner, no Elektra. And the soprano parts are killers.

Yes, it is a complex matter for discussion in a blog. But I do not think that in this case ( unlike my naughty whizzing offs in other cases) this is a tangent.

Well done on obtaining a three year booking in Scotland!

I'm delighted - wonderful people, great setting, but exhausting work. This time I hope to give myself a bit longer on the Monday I'm due to depart so I can do a proper walk in the Trossachs.

Sir David, here's something you might find interesting. It was Deryck Cooke, writing in I Saw the World End, who compared Die Walküre with Strauss's Elektra. His point was that Wagner takes the primitive tales of bloody revenge in The Saga of the Volsung and changed them to fit his main theme of The Ring: the power of love versus the love of power. He makes Sigmund and the infanticidal Signy the loving twins Siegmund and Sieglinde, whose love is based on compassion. In this respect he is more 'moral' than Strauss and Hofmannsthal who simply carry over the bloody revenge tale of the Greek Electra plays into their opera, albeit with a few twists.