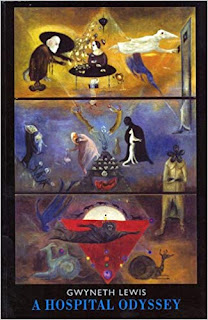 and the blackly comic reality. 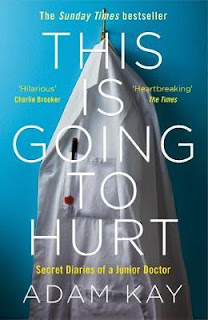 At the start of both, which I read more or less simultaneously, I'd have been inclined to give the palm to Gwyneth Lewis's A Hospital Odyssey, a homage to Homer about the fantastical journey undergone by the devoted wife of a cancer patient - yes, I know it sounds unpromising, but it is unremittingly brilliant, playful and learnedly witty. After all, isn't Adam Kay's This is Going to Hurt a bestseller, an easy read - at least in the pageturning sense? Well, the more people it reaches the better. It has the advantage of on-the-spot reporting by a junior doctor in the shape of a series of diaries; however polished up for the book, they have the ring of total truth, and the abiding impression I get is that no horror story or horror film can be worse than the capacity of the human body for turning against itself. 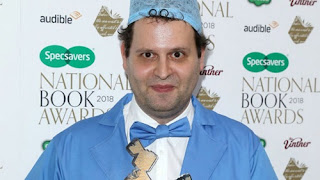 Kay is infallibly, laugh-out loud funny; I wouldn't know what to quote to you since the choice is infinite. But he has a serious message about the overworked, underpaid and undervalued workers of the NHS, while constantly stressing his awareness of the value of his life-saving work to himself and to others. What makes one angry is that here, as in so many jobs but more so given the life-or-death hazards the operative doctor undertakes, there's so little thanks that the doctor is painfully grateful for any kind word. It's terrifying that there's no emotional or psychological support for the many stresses. And of course the final fury is reserved for Jeremy Hunt and the politicians who have NO IDEA what these real-life saints undergo.  Get it, go see Kay's one-man show on the subject and/or wait for the TV series.

My thanks to my best pal on The Arts Desk, Graham Rickson, for sending me a copy. And to the London Review of Books Bookshop, to the cafe of which I and some of the students now retire after my Monday afternoon Opera in Depth classes at Pushkin House, for having A Hospital Odyssey on recommended display. Gwyneth Lewis's Sunbathing in the Rain: A Cheerful Book about Depression was the most insightful and also the most prose-poetic book I read in my darkest hours, so I knew the writing would be good, though I hadn't sampled her primary talent as a great poet. 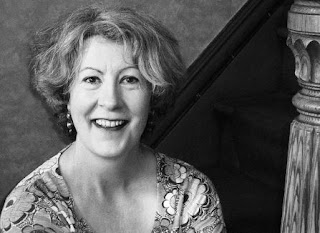 Which she undoubtedly is: what seems to flow so easily as Maris undergoes, Odysseus like, a number of bizarre, shape-shifting trials in search of a stem cell for her dying husband must have been the work of years. I love the authorial voice which speaks to us so directly (UPDATE: though separate from the heroine, she - ie the author - turns out to have undergone the same reaction to her husband's hospitalisation and near-death, hence the sense of total identification with a 'real' subject undergoing a fantastical metaphorical journey. I found out something about this in Lewis's blog attached to what must have been a rather odd radio drama, at a mere 45 minutes). This may seem almost sentimental, but within the tough, chameleonic context it's superb. Maris sees a robot 'sommelier' sampling phials of blood and sees one with the name of her beloved Hardy:

....It was ruby red,
an impossible scarlet that caused her alarm
the moment she saw it. Sick with dread,
she watched the gourmet as it tasted,

swilled the wine round its specialist mouth
then spat out the taste of her husband's health.
It hummed and ha'd, its innards whirred
and said it tasted 'a soupçon of anemia'
then worse. It printed the verdict: CANCER.

Maris was stunned. This was a story
that happened to others, not to Hardy and her.
Then she was pierced through with pity
for him, brave man, who'd hidden his terror
of this, the most feared saboteur

of all. Stop reading. If your partner's near
I want you to put this poem down,
surprise them at the morning paper.
Nuzzle their neck. When they ask, 'What's wrong?'
say, 'Nothing,' but hold them close, while you can.

Maris's adventures, accompanied by the dog Wilson and shape-changing Ichabod, include meetings with Philoctetes of the noisome wound, a microbes' ball (appealing to my own febrile imagination as one horrified by the low level of hospital hygiene), a spider Penelope, the Cancer Mother with her dragon son, something equating to Helen of Troy at the bottom of the sea and Aneurin Bevin as well as Hippocrates on the Island of the Blessed. Sounds intriguing? It would to me as a prospective reader, though my bait was the trustworthiness of a writer I already knew and loved. I can't recommend this mock-epic too strongly, and I know I'll read it again soon. 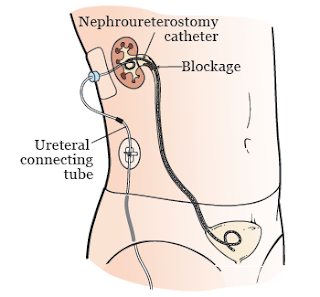 Meanwhile, how am I? Angry that I still don't have a date for the stonebreaking operation, despite the consultant saying emphatically that I needed to have one exactly a week ago. Time to get on the blower to Urology at C&W. In the meantime, the stent means I lead a half-life. I can't walk or cycle very far or go to the gym; the short distances I travel on foot or bike mean pain and blood. I know this is normal because the NHS kept me on hold for three months two years ago when I came back from Turkey, and the one-day two-in-one op, with the stent inside me, 'to be removed within two weeks' said the specialist, but I was told it was 'OK' for a good deal longer. Liveable with, yes, but not great. Well, there are people waiting for ops far more serious than mine. But I still have to be the squeaking gate...

UPDATE: I made the call. Five minutes through the automated hoops before I was put in the queue for urology appointments. 'We expect to answer your call in approximately two minutes.' Then 'we expect to answer your call in approximately one minute'. All against the same initially attractive but repetitively maddening Latin-American easy listening. For the next 24 minutes (do they make money out of this, like they do out of hospital car parking?) The live voice I finally got, not prone to making sympathetic noises about the wait (I was polite), put me through to her colleague who deals with appointments. An answerphone promising to call back if details were left. Which she did, to be fair, within the hour. I told her that Mr X promised that a date for the op must be arranged soonest a week ago. 'Well, it would have helped if we'd got the right paperwork from the junior doctors' So you haven't? 'Not yet. Mr X is currently on leave and I know he's already moved some January appointments from January to February. He's the only one doing this. But I'll let you know as soon as I have a date'. So it goes.
Posted by David at 10:40

Purely for the issue of waiting lists. In every other respect the NHS delivers and it would be best for everyone to use it in an emergency. After all, it saved J's life when his very poor private treatment through work would have meant he'd have died in the cab. Please note that few private hospitals have experts to hand, they're poorly staffed and the agency nurses can be a nightmare (we witnessed one of astonishing rudeness). Another 70 year old friend died in a bathroom, undetected for three hours, which I'm sure wouldn't have happened on an NHS ward. And needn't have happened. My experience this time? Slow but thorough.

These are words to always strive to remember and act upon--and not just for doctors, though certainly for them: "What makes one angry is that here, as in so many jobs but more so given the life-or-death hazards the operative doctor undertakes, there's so little thanks that the doctor is painfully grateful for any kind word." Not long ago, a telephone rep helped solved a billing problem I had, after which she said, as she'd been taught, "Thank you. You are the best part of ATT." I had the wit to respond, as she had been very helpful and nice with it, "Oh, no, it's YOU who are the best part of ATT." She was just flabbergasted to be thanked that way.

Indeed - it put into perspective my own grumbles about thankless colleagues. And generally people don't understand how a single kind word can make a difference. I think we discussed the notion of dropping people an email if you've liked what they've done. It takes so little time. I must admit I'm resentful at the folk who couldn't even email a 'get well soon' when they knew I'd just come out of hospital. But that's human nature for you, or just people's protestations that they're 'too busy'. Often it's the busiest people who take the most care.

Curious to know whether you of all people are intrigued by Gwyneth Lewis as a poet. I saw a volume of John Ashbery in the same bookshop - its poetry section is stunning - and resolved to get that next week.