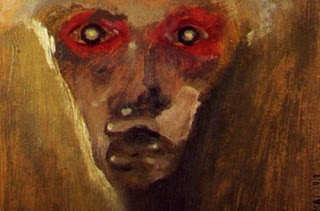 4.30am, and I shan't sleep, so here's a real-time rant from the heart of Chelsea and Westminster Hospital. Apart from the visitation of the manacled maniac - see the previous post - the worst here is the emaciated gentleman on the ward who coughs and retches for hours on end. Three nights ago I got two hours sleep. Then it was agreed that for his own sake as well as ours, since he didn't seem to have slept for 24 hours, a sleeping tablet would be best (with his agreement). That hasn't had much effect in the small hours today. I went to read in the TV room for half an hour around 3.30am, but it hadn't abated when I got back. The nurse just gave him something else and it all went silent for about 10 minutes, but it's started up again. In between we get 'Oh my God', 'Yallah, yallah', 'The end must come', 'What a dump', 'It's so hot in here' - and I'm not even sure if it's delirium, for he responds rationally if rudely to treatment.

So in the midst of all this I finally snapped. I went to the bathroom at 3am, trailing my drip-feed antibiotics on a stand attached to the cannula in my arm as well as my bag and tube attached to the left kidney. It seemed that one of the connections had come out, and the feed was dripping on to the bottom of the stand. A girl in blue I hadn't seen before was sitting at the desk outside our bay.

'I think one of these has come out,' say I, pointing to the tubes.
'I don't understand what you mean'.
'This - what I'm pointing at'.
'I have no idea what you're talking about. I don't work here [literally true, since like most folk I've seen in the small hours, she was looking at her Instagram account, but she was employed there, if only to tide over short staffing in the night shift]. You'd better ask someone else'.

Would you blame me for losing it? 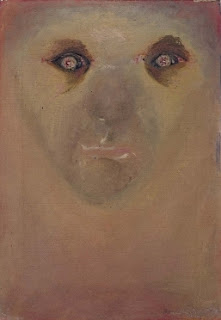 Our night nurse is very good at his job, but he was on a break. There seemed to be only one nurse for all six bays, so it took another 10 minutes for her to come.

So many good people here, but in the last few days I've encountered two of the don't-cares. The other is an agency nurse who emptied my bag but left the nozzle untightened, so stuff leaked over the floor. When I told him he'd forgotten to tighten it, he said 'they work their way loose'. I said, no, that wasn't the case. A shrug, no apology.

My other beef is the squalor of the lavatories and bathrooms. An outside agency comes in three times a day to 'clean' (I've seen how perfunctory that is in the bays themselves, and the other day J and I were sitting in the Costa coffee bar downstairs on my daily excursion when a man with a wet mop came up, made a few wet patches and left all the floor around them, including all the food under the tables, untouched). The last appearance of its staff is at 2.30pm. So if, as happened the other day, someone comes in, drips blood, leaves discarded towels, gowns and swabs on the floor, etc, the bathroom can be left uncleaned until 8am the next morning .The nursing staff aren't allowed to remove the detritus, It makes me rage, this false economy. A Belgian friend tells us that hospitals there don't have our MRSA problem because they have 24-hour on site cleaners. And isn't hygiene in a hospital as important as the actual nursing? Joseph Lister would despair. 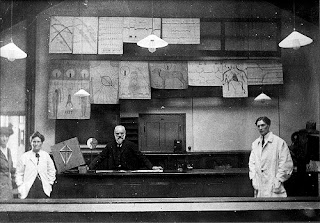 8.30am While the rest of us are prostrate after an exhausting night, our screamcougher is asked by the visiting doctor how he feels and says 'fine' (later, to a Chelsea Hospital administrator who said ' I hear you've been in some pain', he said, 'no, only a slight ache'). The plus is that they're sending him back to the unfortunate institution where he must make everyone else's lives hell. I addressed him this morning, 'Sir, I'm extremely sorry for your unfortunate cough but could you please tone down the complaining, There are a lot of people in here worse off than you' Mutterings and imprecations, but it worked - for 15 minutes. Anyway, they're coming to take him away shortly.
Posted by David at 13:44

Schoenberg’s The Red Gaze works on so many levels with your report of ongoing abominations. We redouble sending good thoughts for your escape as soon as possible.

Sorry to read about your problems. Best wishes for a full recovery. Get in touch when you are up to it.

Thank you, Sue and Dale. Waiting for my decisive temperature taking this evening. If it's down, like the rest have been, then they swap my tube and bag for stent tomorrow and I can go home before coming back in for the stonecracking. But the 'spikes' tend to happen in the evening.

Get it out ASAP.

Swiss army nice should do the trick

Not helpful, Liam, even as a joke. I must abide. There is at least a clear plan of action, even if i question it's the right one.

You need to run away and make a refugee claim in Canada before it is too lake. Do take care and all the best to you.

Is Canada's health service as good as so much else there? PS - quiet(er) night tonight, though this shift isn't doing its job properly.

Apologiszes David. I always find black humour helps in these situations , a bit like the Black Death, swift and efficient if a littlebunpleasant.

Patience and you will be home in a few days

Or in the good old Catholic tradition offer it up for the souls in purgatory.. ... This never quiet made sense to me....

Or you could be in Angola with Ebola .

Leave the black humour to me, experiencing it all. There's some, I hope, in the previous post. But in a third post I shall make some amends by accentuating the positive and all the good treatment I have received here by dedicated nursing staff who work well within the bureaucracy and the constraints.