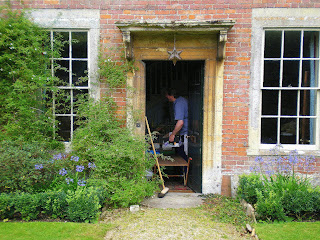 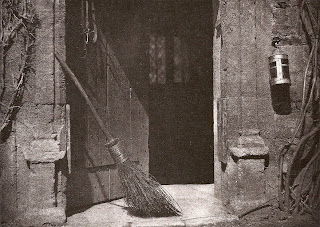 176 years ago this month William Henry Fox Talbot of Lacock Abbey produced his first miniature negative images of doors, windows and walls around his home (the above suggestive, quasi-Dutch-genre picture was in fact taken almost a decade later in 1844). 50 years ago today the diplo-mate was born in Romford. We little thought he'd be celebrating the big half-century in style courtesy of our dear and genial and infinitely thoughtful friends Deborah and Andrew van der Beek of Cantax House in same National Trust-run idyllic Wiltshire village (I introduced readers to the artistic delights of the house two years ago; scroll down past the Stokes Croft stuff). 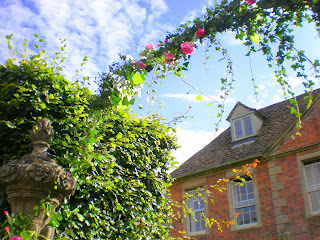 The Cantax broom photo up top, I promise you, was not a set-up; I only just thought of the Fox Talbot connection when I was musing what to put first in a selective view of Saturday's big party. It's among the first of all too many shots I took throughout the day; fab foodie caterer Zoe had just arrived with the raw ingredients for her Moro-inspired menu, including a box of white peaches for the Bellinis to be served up at 6 in the sculpture garden (after 4 o'clock tea and scones with equally carefully selected strawberries for the jam). 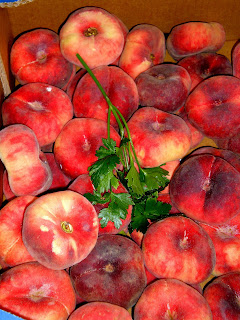 Said diplo-mate shies away from net recognition, and it wouldn't be fair to expose too many of our guests to the indignity of blogshots. But I feel I must at least feature two of my oldest, dearest friends from university days, Ruth and Lot, chatting beneath Deborah's most inspired piece of topiary after our morning walk along the Avon. 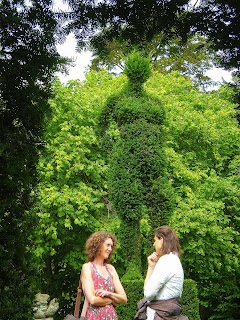 What else can I show? The beech-hedge of fame, perhaps, where guests were asked to choose their most admired personality for later teaming-up with idol's mate or friend (this never properly happened as it was supposed to be a seating-plan thing, but everyone sat with whom they wanted and we didn't want to break up the easy flow). 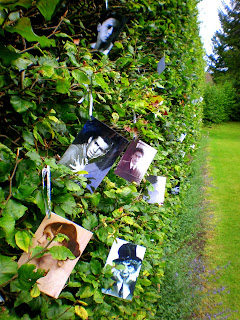 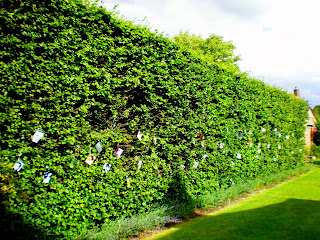 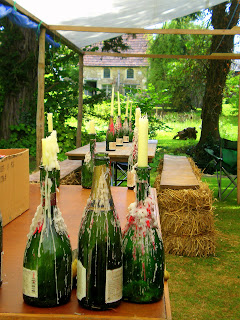 and between tea and supper 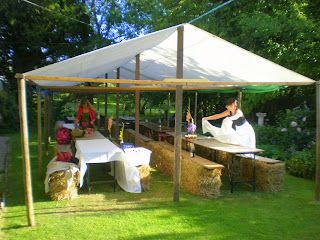 which duly followed from 8pm onwards. And a little film to give you an idea of the exquisite interconnected gardens which made it such a moveable feast, a bit like a Bubble Theatre show without the script. We start on the topiary tower and look down on the gardens before (as I all too loudly proclaim) coming back to where we started. Never did dance as planned to our accordionist, but again it all just evolved naturally and everyone seemed happy to talk to everyone else. Quality, inevitably, is poor and woolly, as it's only the 'movie' facility on my miniscule Olympus, but it does give some idea of the garden 'rooms'.

I guess journalists could make a meal out of the fact that one very lucky segment of the population quaffed Bellinis in an English country garden while Tottenham burned. Yes, the fact is we all live in our own little bubbles of community in London, but I also reckon that, while the violence has a lot to do with dispossessed youth excluded from society and yet told to want and consume what everybody else has, we at least strive for an inevitably flawed kind of integration better than most - as despairing councillors around the London boroughs have obstinately maintained.

Is there a still deeper cause? If so, Camila Batmanghelidjh of The Kids' Company can put her finger on it, as one of the few articulate people close to the problems of poverty and inequality. Superb if chilling speech she gave on Radio 5 this morning (you can find it on the BBC News site if you scroll down). Lives proceed along parallel tracks, rarely meeting, and the rest of society muttering unhelpfully about 'criminal acts...punishment...no justification' If I were at the receiving end of this mob violence, I'd probably feel the same.

As for the contrasts of recent days, I thought especially of my favourite poem, Auden's 'A Summer Night' - based on the experience of the Downs School in our equally beloved Colwall beneath the Malverns where the poet taught, and where they used to actually carry their beds out in to the grounds (so 'out on the lawn I lie in bed' isn't just a poetic fancy). For Auden, it was the looming war which seemed so alien to his intense experience; these past few days, the chaos has all been a lot closer to home. Coincidentally, the sculpture you see on the lawn - uneaten side only - Deborah called 'the world gone pear-shaped'. 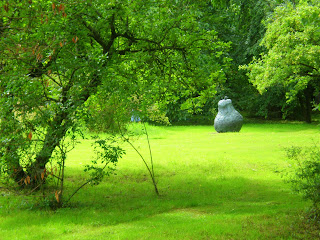 And, gentle, do not care to know
Where Poland draws her eastern bow,
What violence is done,
Nor ask what doubtful act allows
Our freedom in this English house,
Our picnics in the sun. 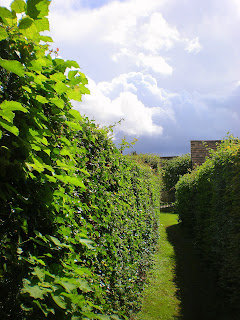 10/8 If anyone thinks it isn't possible to get a grim laugh out of all this, take a look at the latest post from the toecurlingly fantastical spEeak You're bRanes.

13/8 On a more cosmic scale, I can now confirm that the shooting stars at least half a dozen of us saw so clearly from Lacock last Saturday on an exceptionally clear night are part of the Perseid meteor shower, now at its peak (though apparently a full moon takes the edge off the spectacle).
Posted by David at 14:06

I am not sure that I understand exactly Auden's comment on Poland's Eastern bow, but if it is to say that we have wonderful England to enjoy so surely we need not be involved in foreign problems, the parallel with Lord Halifax in 1939 is close. He sat on his terrace and thought how splendid and peaceful England was: should we really upset this paradise by getting engaged in the stopping of Adolf Hitler?

I think you misunderstand. It's not about ignoring. Read the whole poem.

I have now read the whole poem and apologise for leaping in - although I did say that I wasn't quite sure that I understood Auden's point.

Well maybe I am at my computer rather sooner than others, so let me get in first. The only thing better than your blog on the party ( very well judged) was the party itself. It was well conceived and well executed and in such a splendid setting as can be seen from the pictures - the garden rooms ran into each other in the most relaxing and elegant and interesting way, enhanced by the statues - sculpted by the kind lady who with her husband provided the stage on which the party was performed - and in such a happy atmosphere, which was the overriding virtue

The National Trust own a large slice of Lacock and let the houses to tenants who live there, and thus it is still a village and not just a group of second homes. Perfect.

What a splendid party and beautiful photos you took. Certainly the Diplo-Mate has much to be happy about being Fêted in such grand style. Many Happy returns to him.
As for the riots thank you for posting that clip, she certainly presents it very well and in context, it is the mind frame and how to change it is the challenge. All this violence is so sad.

Thanks, both, for such warm commendations (of course, Laurent, if I'd thought there was a chance you'd hop on a plane from Ottawa...).

And 'sad' is the right word. Desperately sad that these aimless, disenfranchised kids should turn on their own communities and destroy what little they have. Another powerful thing CB - I think it was - said was that they've been doing these terrible things to each other, in decimating gun warfare, robbing of poor estates, out of sight of the rest of us - and now at last the chickens have come home to roost and a combination of idleness, strength in numbers and the short-term exhilaration of something actually happening in a riot have brought it all out into our public spaces.

Oh, how great it looks! I do wish I had been there! (at the birth day party, not in Tottenham!)Why, oh why do I always miss these great things- I remember Bella's do in Tuscany too in particular...I will be ther for the sixtieth, and that is a solemn promise ( or your fiftieth??)
I send you lots of love
Sophiexxx

Thank you, dahlink, for making it clear to the world that I am not yet fifty (though let when I shall be remain shrouded in mystery - as far as some readers here are concerned, it could be many years hence...)

In the meantime, I bow in admiration at your great work going round the villages near Djenne with the trachoma curers (take a look, everyone). As I said, so many parallel lives...

PS You were featured on the wall of fame, to be twinned with your unlikely lover Cecil Beaton...