Island hopping behind the wall 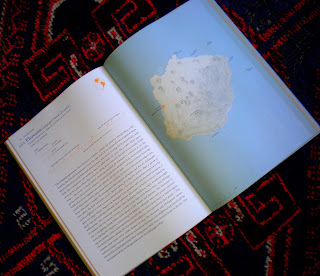 Here's a post to commemorate rather loosely 50 years since the Berlin Wall went up. GDR resident Judith Schalansky nurtured a childhood fascination for 'the real places that I could not visit'. Her chief source was an ideologically slanted atlas with a double page spread showing the Federal Republic of Germany on one page and the German Democratic Republic on the other: 'on this map there was no wall dividing the two German countries, no Iron Curtain; instead, there was the blinding white, impassable edge of the page'.

Nothing daunted, her fascination with remote islands she could then not visit and even now, she says, never will, led to one of the most singular and beautifully produced books I've come across, her Atlas of 50 Remote Islands with what I presume to be true, mostly human, romances attached to the finely executed maps. I haven't read many so far, but the one pictured above immediately caught my eye.

It tells how the island in the Galapagos archipelago now known as Floriana became inhabited by a free-living German teacher and a dentist from Berlin. In 1932, three years after their arrival, self-proclaimed Austrian Baroness Eloise Wagner de Bousquet swanned in with her two lovers and a plan to build a luxury hotel for millionaires (toubab Sophie dearest, are you reading?) The outcome: 'baroness' and alpha-male lover vanish without a trace, lover number two's skeleton is found on a nearby island, the dentist dies of food poisoning and the teacher returns to Berlin. 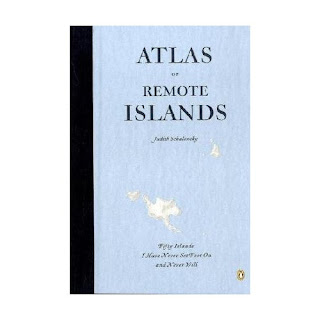 True or false? I want to know more, and I'm sure someone must have written a whole book about it, which I'll duly search out. But I thought the elliptical description in Schalansky's 'atlas' was highly suggestive in itself. For which I thank our friend Kate Griffin, who gave this lovely book as a present for the diplo-mate's 50th. The advantage of which is that I get to enjoy most of his gifts too, not least the two privately-produced volumes of Ravilious letters, drawings and paintings I purchased by inviting select guests to contribute to the rather large sum involved (from me he gets a holiday in Iceland).

Bookwise, we rarely diverge in our tastes. Concerts are another matter; he has now resolutely refused to set foot inside the Albert Hall again if he can help it, and my love-hate relationship with that place gives me some insight in to why. For my part I can't always see the point of what I repetitively call, borrowing the phrase from a very rude friend of ours, attending the opening of yet another envelope. But we need some areas of non-overlap if we are not to metamorphose entirely into Darby and Joan.
Posted by David at 11:56

Burke in his Essay on the Sublime and the Beautiful ( if I remember correctly) said that London would be more wonderful and awe-ful if in ruins. I saw this - not London but Berlin, before the Wall went up, and the centre of Berlin, along the Unter den Linden, was in complete ruins - piles of rubble on all sides, only the Opera House and the Russian Embassy restored. All was silence as I sat on the broken wall of the former Crown Prince's palace, except for the calls of the birds....

What a wonderful idea, this atlas--how did you come across it, I wonder? And Damant's description of Berlin before the wall went up is a poignant addition to the post.

On a lighter note, do you know, I had to go look up Darby and Joan to find out what you meant by that! I somehow suspect that you and your "diplo-mate" are in no danger there, though of course I haven't any basis for my surmise.