Having so much fun with R&H 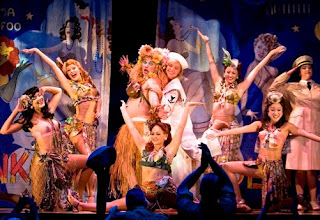 Not last night, it has to be said, with a lacklustre revival of Rodgers & Hammerstein's South Pacific at the Barbican less than fresh from what was by all accounts a much better show at New York's Lincoln Center Theatre. Samantha Womack's Nellie Forbush, pictured above by Simon Annand as dyke's delight with Alex Ferns's dragged-up Luther Billis in 'Honey Bun', seemed OKish, and you had to make allowances for a broken toe. But then Matt Wolf, who kindly sent me off to cover the revival for The Arts Desk, pointed me in the direction of her Broadway predecessor Kelli O'Hara, and there's just no comparison. This is the real thing, and it's quite a feat to do your own stuff after Mary Martin and Mitzi Gaynor.

It didn't help yesterday evening that I'd spent some time revisiting the original Broadway cast recording and the Hollywood soundtrack. There's mezzo Mary with her sassy tones, and Mitzi with her hairwashing pizzazz; there, too, are Ezio Pinza and Giorgio Tozzi (Rossano Brazzi's voice dubber) seducing - not entirely appropriately with their Italianate diction since Emile is of course a Frenchman - in a way that even the excellent baritone Paulo Szot cannot. And much as I admired his show delivery of 'This nearly was mine', one of the classic tracks of all time now happens to be the way Bryn Terfel weaves a special, smoky magic on his 'Something Wonderful' disc.

Rumour has it that the R&H estate hated the Trevor Nunn production a decade ago, but I got so much more out of it than I did with last night's routine. And it didn't help to have a classic replica of the Broadway audience, chattering through the overture, whoo-whooing even the mediocre and of course rising to their feet for no good enough reason at the end. I won't say I'm going straight back to the film - its war sequences are horribly over-extended; but I can dip into bits of it. And then there's the much earlier (1949) Martin/Pinza team in magic moments like the (revolutionary at the time) 'Twin Soliloquies'.

You are right about that Kelli O'Hara. And, hmm, with that and Terfel, do I hear a waltz, perchance? Loved your ferreting out the great performances, sent me down memory lane. And speaking of the O'Hara managing to come out from under Martin and Gaynor, I'll add another performance that I thought managed a similar feat: I thought Elaine Stritch owned The Ladies Who Lunch forever, then along comes Patti Lupone: here

I was thinking just that about the R&H knack for waltz-songs: 'Hello, young lovers' is another valse lento, and nobody catches its bittersweet quality better than Julie Andrews just before the crisis - another case of belated 'ownership'.

Before turning to Patti, may I also recommend Cleo on her Sondheim disc - which also has the best 'I'm still here' I know.

What a star, Kelli O'Hara!

Well, I could get lost in Cleo Laine's voice, I can see that.

Speaking of gorgeous voices (of an entirely different type), my MacBeth DVD finally arrived (almost 2 weeks--do they think I live on an iceberg somewhere?), and Violetta Urmana is sensational (and as an actress, too, as you noted). So glad you highlighted this.

Patti - now that I've managed to find her on a YouTube clip I could HEAR (there is one) - does her own thang all right: makes friends with the pitch (it was part of Elaine's charm that she wouldn't) and - what a mouth; only Jessye's is bigger! And I love it that behatted ES is sitting there looking (feigning?) unimpressedness...

By the way, some way back, I see, I had Carol Burnett as contrast to Elaine: http://davidnice.blogspot.com/2010/07/two-for-mahler.html

Urmana really is one of the greats, whether as mezzo or soprano. Never been disappointed, often thrilled to bits (Verdi Requiem, Forza del Destino).

How could you have missed this youtube of Pinza and Martin actually performing the roles, not just singing on a cast recording? http://www.youtube.com/watch?v=jqBtME2kXUY Who would call that "seducing???"(although he does seem to be in love with his voice) More like an uncle with his favorite niece. And that movie you say you'd watch "in bits," you didn't mention why- it's AWFUL!! Emile, Cable and even Bloody Mary were very obviously dubbed (they dubbed Juanita Hall as Bloody Mary even though she'd played it for years on Broadway and won a Tony for it!) The director experimented with colored filters throughout, the whole race issue was totally softened, Gaynor's Nelli was cute but silly- that movie screams for a re-make. And is it fair to expect a British actress to be as "real" as Kelli O'Hara who's from Oklahoma and who has family in Arkansas? Does that mean performers from a different country or region don't get to perform this? You can't compare a studio recording (created under perfect conditions and with the ability to do take after take and to combine bits of good takes) with a live performance. Really disagree with your approach which doesn't value South Pacific as a whole work or each performance as a whole or the live experience at all. We should all stay home and watch bits of things on youtube???

Re Martin and Pinza, perhaps because the cast recording means more to me, since I've known it for years. Re the film, enough said - this isn't supposed to be a detailed comparison. For more about the work itself as a whole (and a production which worked much better), see the Arts Desk review. And, no, Samantha Womack's inadequacy had nothing to do with the role being out of bounds to furriners (in the TAD piece, I actually said I found her accent authentic, though what would I know?) It's because she can't sing nearly as well, has very little charisma and just doesn't let the spectator feel warm and comfortable with the part before R&H put a bomb under her.

But in any case, this is my blog, and I'll put up/ignore what I please. But don't tell me I don't understand the work as a whole.