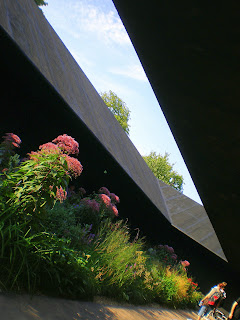 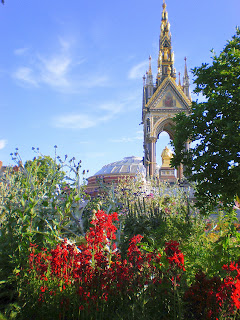 As I wandered towards the black rectangle that is this year's (11th) temporary Serpentine pavilion in Kensington Gardens, I dimly remembered that it was something to do with plants. But I put that out of mind as I walked into the dark corridors (for in fact if you approach alongside the main building, there are no display panels to tell you what it's all about) - only to emerge with a pleasant surprise in the kind of thing Ketelbey wrote squidgy music about. For this was indeed a monastery garden of sorts. 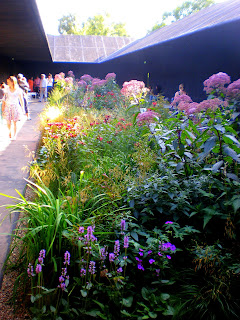 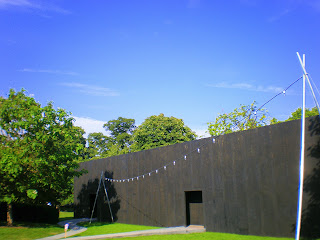 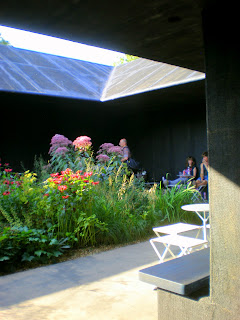 Swiss architect Peter Zumthor tells us that he has long dreamed of a hortus conclusus, as the medievalists and he call this sort of thing, enclosed on all sides and open to the sky. The 'meadow garden' itself, designed by Dutch landscaper Piet Oudolf, is remarkably lush for so short-term a visitor. Around it you sit and bake and - Zumthor hopes - talk to your neighbour. Well, it does ring the changes on what's been here before, but I'm disinclined to linger when what's beyond is so much more spectacularly beautiful. On Tuesday afternoon, when I had to pedal to the Albert Hall to pick up some off-the-beaten track Rachmaninov scores from the visiting BBC Philharmonic, the path open to cyclists seemed very inclined to inspire a green thought in a green shade 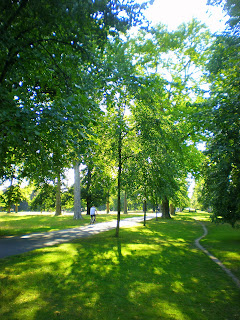 and Albert's monument does provide such a spacious terrace opposite the Albertopolitan colosseum, crazy and grandiose though it seems to celebrate a Saxe-Coburg Gothan on this scale ('I still feel some lingering discomfort', wrote Mark Twain in 1872, 'that this princely structure was not built for Shakespeare - but after all, maybe he does not need it as much as the other). 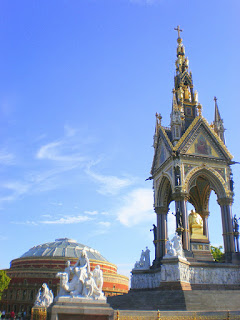 And the imperial statuary is a bit ludicrous if you stop to think about it, too, but done at a high level, and its white marble continental allegories did gleam so in Tuesday's late afternoon light. 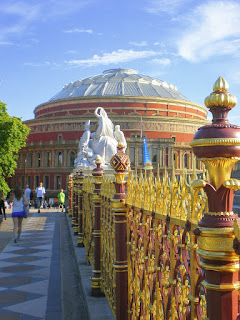 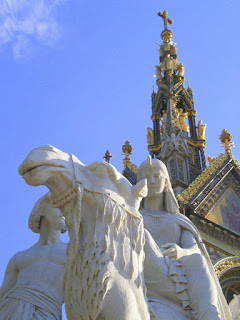 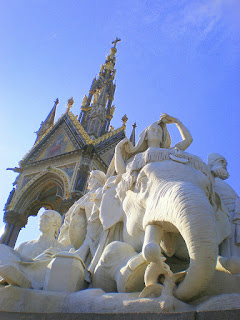 and Europa on her bull as executed by Patrick Macdowell when one Gibson refused. 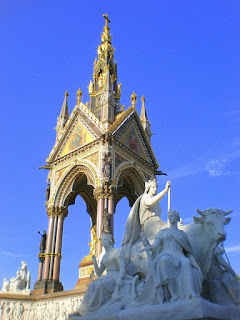 The steps are a pleasant refuge in intervals of Proms and (on Wednesday, when I persuaded Juliette, straight back from Tunis, to join me for a long but pleasant haul) between them. But can't park and hall/BBC co-ordinate? We were rudely chucked out of our brief idyll at 9.45 as a recorded voice of a gruff Scot from a passing van told us that the park was closed and we were to make our way to the nearest 'turnstile'. I was pleased to see everyone looking sluggish about it, and the park attendants sheepish, as we shuffled off to drink in the Imperial College bar until the 10.15pm recommencement.

Marshalling the crowds for the Proms is obviously tough work, but do some of the attendants have to be so officious? I was persecuted by one for downgrading from my seat to a deliciously underpeopled arena for the late-night event, but when I told him to lighten up - and was a bit surprised by my own tone of voice - he ambled away (my self-appointed censor would like it to be known that he thinks this is bullying, lawbreaking and unsympathetic to people doing a difficult job; I beg to differ). And then it was all joy. I've written it all up on The Arts Desk, but I'm inclined to linger since the great Chris Christodoulou, photographing for the BBC throughout the festival, sent me through some snaps I wasn't able to use on TAD. Here's Sir Andrew 'Lord Hee-Haw' Davis so obviously having fun. 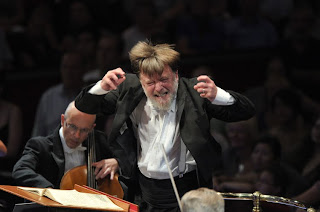 The evening improved by degrees from Tasmin Little's underpowered Elgar Violin Concerto (good orchestral touches, shame about the soloist)to SAD's fab Grainger In a Nutshell - great to hear it live for the first time - a Till Eulenspiegel brilliantly adapted to tricky acoustics, and the late-night Grainger Plus jamboree. Ah June Tabor, June Tabor, you are now my muse: the Maria Callas of the folk world, and I'm not being ironic. How one soft, low voice, beautifully miked, can create magic in the Albertine wastes. This is she back in the 1970s, a perfectly-modulated balladeer.

La Tabor's appearances were too short if undeniably bittersweet, but there wasn't a musician on that late night stage who - unlike our underinspiring violinist - didn't put across his or her case with maximum charm and communication. The style of the Kathryn Tickell Band may not usually be my scene, but I loved the glamorous smallpipes lady and I loved her fellow musicians (pictured here guitarist Joss Clapp, fiddler Peter Tickell, Kathryn, accordionist Amy Thatcher). 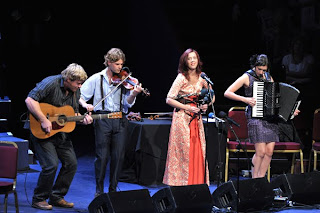 Three cheers for the Northumbrians and Geordies who put their heads together to shape this event. Percy would have doffed his cap and kissed their hands, I'm sure of it. And at last I've heard an all-good Prom this year. Do watch it when it's televised on BBC Four on 14 August.
Posted by David at 09:23

Hello David:
First, a most interesting view of the 'hortus conclusus'. For us, such enclosed areas only work in relation to other more open spaces and so, the excitement of entering the black box is really only effective, in our view, as part of the journey from and, susequently into,the open green of the park. In our gardening days we saw many Oudolf and Oudolf inspired 'prairies' but, sadly, apart from the bravura of orchstrated blocks of hundreds of plants performing at their peak, they somehow never seemed to capture our imaginations.

But, how very varied and splendid the Promenade Concert sounds. We have not heard June Tabor sing and are now tempted to seek her out and listen. Such a pity that you were herded out from the park since how wonderful to enjoy the great outdoors on a beautiful evening. Still, clearly the music more than compensated.

Interesting perspective: it does much exercise my brain how far quickly-devised gardens can really work; the pleasure is the development over years, what thrives and what doesn't. For which reason I disliked the Chelsea hullabaloo.

Some folk huff and puff about the expansion of the Proms into other spheres. I say, room for all, and I must say I was quite touched by the messages left on the Arts Desk's Horrible Histories gallery - clearly some families had gone to extremes to travel, queue and enjoy the day. And for all its acoustic faults - I have such a love-hate relationship with the Albert Hall - it's an amazing place to enter for the first time.

David dearest,
you manage to wring the poetry out of the Albert Memorial! that is some feat...
xxsophie

Did you ever check out the splendid waterworks in Stoke Newington, referred to by MrHoward Lane and myself? Also lovely is the owl house in Clissold Park nearby, with a number of strikingly beautiful owls perched in large cages. Orthodox and ultra-othodox(note the distinction) Jewish couples newly married nearby would often be photographed below the Snowy White, a magnificent pure white large owl perched imperiously on a high tree-branch, used as some symbol of purity. Look out THE LONDON THAT NOBODY KNOWS(PENGUIN). I do hope that it is still there(the owl-house that is)
John Slepokura