Diaries of one who would be good 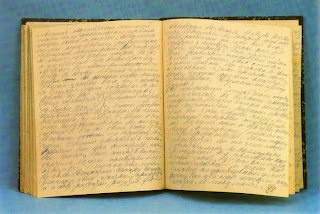 I've been leading a melancholy reading existence in the shadow of that great but troubled man Lev Tolstoy, namely working my way through the two volumes of his diaries as selected, edited and translated by R. F. Christian. He's such a beast to his clearly not very easy wife throughout their long and all too often Strindbergian marriage - though you end up trying not to hate her for harrying him to a death away from Yasnaya Polyana which the 82-year-old actually seems to have peacefully embraced - and comes to some outrageous conclusions about women so obviously based on that relationship. You keep wanting to kick him into giving away his estate instead of feeling masochistically bad about it, too, just as you want to shout out 'not good enough' when he beats himself up about his 'churlish and egotistical attitude' to Sonya*. 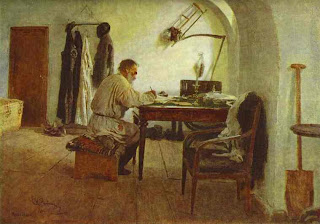 But on the other hand the observations on non violence and human love versus the harm of organised religion, state education and governmental murder seem so timeless that it's not hard to see why he was so idolised in later years (and he hated that too, being seen as the celebrity rather than the man). Why the rule making? Is it pat psychology to trace it all back to the 'sacred ideal' of the mother as well as the father he lost in his childhood? He does seem like a lost young man, though there's something comical about the determined listmaking (18 April 1847: 'the first rule which I prescribe is as follows: No. 1. Carry out everything you have resolved must be carried out. I haven't carried out this rule'). And so it goes on: he blames himself for his 'gambling, sensuality and vanity', but only kicks the first two over the years, and the latter probably never.

But isn't this the point: that we (or I, at any rate) love Prince Andrey and Pierre Bezukhov for trying to reach out for the meaning of life, thinking they've found it and then losing it again. Isn't the search what matters? 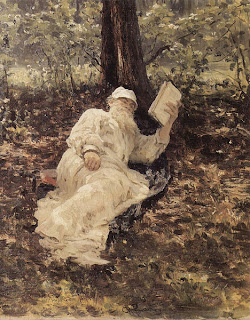 I copied out huge chunks of his wiser entries into my little black book: marvellous stuff on the insanity of believing that the only correct view of life comes from a council of bishops convened 1500 years ago, the 'terrible' reading of official (ie royal) history ('murder, torture, deceit, robbery, adultery and nothing more...') and the intense observation of the natural order of things, especially well expressed in a passage written months before he died. But increasingly I found the pith of the odd line more interesting (or maybe my writing hand just got tired). Hence a few I note down as much for myself as anyone else. The punctuating portraits, by the way, are all by the superlative Ilya Repin - I had no idea he painted Tolstoy so often - and as a result tend to show us the older writer.

3 February 1870: Truth repels, because it is fragmented and incomprehensible, while delusion is coherent and logical.

28 September 1896: The only instance when a person can and should be preoccupied with himself is when he feels unhappy. Unhappiness is the best condition for improving oneself, for rising to a higher level.' Viz Dorothy Rowe, whose wisdoms on this subject felt horribly sanctimonious and weren't much good when I was mired in unhappiness some years back.

23 June 1903: I'm a person with very bad qualities, very slow to understand good...and so I'm not a bad teacher, in fact I'm a good teacher.

18 December 1905: To be good only means wanting to be good more often than bad. And this is something I desire. 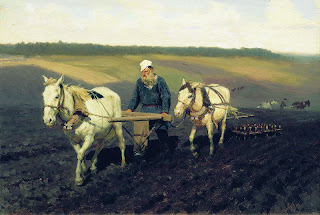 17 April 1906: 'Contemplation of nature' is 'the awareness of our unity with everything, an awareness concealed from us by time.

21 March 1909: There can be no heroic feats, no heroism, nothing "great". There is only doing one's duty and not doing it.

You can see where Gandhi and Krishnamurti came from, though Tolstoy himself took as much wisdom from Indian schools of thought as he gave. And his insistence on the perennial philosophy, the insignificance of work produced with a desire to be 'contemporary', is one of the aspects of his flawed and partial view that I find most attractive. One final picture, this time a photograph of Repin reading the news of Tolstoy's death. The one major portrait I couldn't track down - a double one of Lev Nikolayevich and Sofiya Andreyevna - stands just behind him. 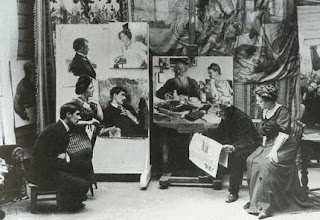 *One of the most extraordinary passages in the two volumes is the 'dialogue' appended to the entries for 1898, starting on p. 464 in the second volume. He reproduces, as close to the event as possible, a late-night scene between himself and Sonya in which we clearly see him hounding her, irrationally and relentlessly, about her obviously platonic relationship with Taneyev. It's painful reading, and you want to scream along with Sonya long before it's concluded. I wonder that someone hasn't dramatised this as a twenty-minute play as much 'from life' as it's possible to get.
Posted by David at 16:05

Hello David:
What a wonderful post which is filled not just with the occasional wise thought but with ideas and philosophies which require time to appreciate fully.

We have neither of us read, nor even dipped into, Tolstoy's diaries so that what you write here is both of interest and, at the same time, hugely tempting.

It is wonderful when one makes this kind of discovery. Only recently we were introduced into the world of Montaigne [about which we touched on in a post] in such a way as to excite an interest which, previously, had remained untapped. We shall now look at Tolstoy in a completely new light.

Yes - I have the complete Montaigne sitting here as yet unread, to my shame. And then there's Pascal and Rousseau and...and...

One of Tolstoy's most powerful passages is about 'serious, true, necessary knowledge...the thoughts of the greatest thinkers who have stood out from milliards and milliards of people in the course of thousands of years...sifted through the sieve of time.'

Trouble is, one can't live on that exalted plane all the time. But too much life does go by with too much wisdom unread or unabsorbed. And Tolstoy is definitely in that select company.

Such a treasure-trove of a post. I leapt on it at once! The Repin portraits are splendid; they bring us so close to the man (or at least part of him, for, as you note, he had more than his share of complexities).

I so agree with you, "that we (or I, at any rate) love Prince Andrey and Pierre Bezukhov for trying to reach out for the meaning of life, thinking they've found it and then losing it again. Isn't the search what matters?"

Do you know the BBC full-cast audio of War and Peace (unabridged)? Dear old Rumpole (Leo McKern) is General Kutuzov. Such magical company it made for us driving up and back from Maine a couple years ago. We despair that we haven’t found anything like it to accompany us on this trip.

I love also the thought of your little black book. Your insatiable intellectual curiosity is a marvel (in my own little way, I recognize this, as I go through numerous little black books, not to mention page flags in books, and then wonder what I am going to do with all of that). I can well imagine how you may have been jotting so much down that your hand grew tired. This quote alone, the first you offer, is magnificent: "Truth repels, because it is fragmented and incomprehensible, while delusion is coherent and logical."

1896 (Hmmm. Discuss) - If one considers that nothing has any meaning except that ascribed to it, a belief consequent on the proposition that nothing exists except the perceptions of one's own projections, then there is no difference between the perception of good or evil, but only a difference in the way one is thinking. Or, on a more concrete level, an act of evil is an opportunity for forgiveness (as understanding as opposed to condescension). I remember a startling conversation between two of my sisters about rape in which the younger said she thought it the worst crime of all to which the elder countered she could think of no greater opportunity (actually the word she used was gift I think) for forgiveness.

That sounds even scarier, the way you put it, Wanderer. Might be me being slow again, but why was 1894 a good year? And Sue, would that be the same radio serialisation that featured Simon Russell Beale as Pierre? I remember listening to the delicate scene between him and the betrayed Natasha, and gnashing my teeth because they sounded so familiar with one another going 'oo, Pierre' and 'ooh, Natasha' when they should have been using each other's patronymics. It felt so wrong.

I also thought we'd revisit the BBC TV serialisation. We gave up half way. Anthony Hopkins is marvellous, but Morag Hood looks like the Infant Phenomenon as Natasha and it all looks a bit cheap and nasty. And aren't 1970s hairdos a giveaway? Best Natasha ever: Yelena Prokina in the Vick Kirov production of Prokofiev's masterly selection of operatic scenes.

David, I thought the quote from 1894 "Material good is only acquired at the expense of other people. Spiritual good - always though the good of other people" worth underlining, and the second sentence especially falls into the 'hmmm discuss' category as well.

Yes, it was. I don't remember the "oo, Pierre" aspect to the scene you refer to, though I'll confess I wouldn't have been attuned to the patronymics issue. (You can be sure, should I revisit the serialization, I'll be on the lookout for that!)