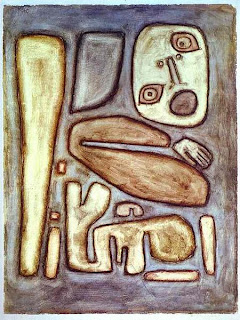 It might not look to you the way Paul Klee portrays it above, but we've surely all known a little of it over the past few days. Will the riots come to my part of London? Should I bolt the door, shut the windows to block out the sound of sirens? Something, of course, I was much more inclined to do after watching late-night news on Monday evening.

The reality, of course, was different: reality is rarely, in our privileged world at least, quite as bad as you fear. Unless, of course, you've lost someone to violence or had your house burned down by irrational hatred. But the fact remains that the greater part of London was NOT burning, our local streets were NOT a war zone. The very areas you'd have expected to be targeted by marauders in search of luxury goods were as quiet as the grave. All I saw when I cycled through Knightsbridge on the way to Mayfair (!) on Tuesday evening were a boarded-up Harrods and shops with their front-window goods removed. All I heard were the distant sounds of sirens punctuating the night air, as they've continued to do; and all I witnessed yesterday was a burnt-out car being towed along the King's Road.

None of which is to say that the affected zones both here and further north would not have been the most frightening places in the world to be; that five good people died senselessly, and that there's nothing more sickening than seeing an injured young man being robbed by those who played Good Samaritans to him. But we mustn't succumb to fear, nor do I expect the spirit here to do so. Still, there were some wrong messages flying around earlier in the week. 'Stay in and stay safe' wrote the organisers of one hip cancelled event on Monday. No: go out, having checked the safety of the area you're visiting, and don't let the bastards wall you up.

Nor did they, as Proms continued to be full to capacity and most theatres functioned. Now we have the fallout, the good and the bad. First a bit of the bad. The 100,000 who signed up to an 'axe the thugs' benefits' plea (like that's going to stop the violence). The Americans who hold prayer rallies for our doomed island while Brits mark it with 'Operation Cup of Tea'. The further disavowals of politicians who say this has nothing to do with deprivation and seem to think that criminality flourishes in a vacuum (well, in a sense it does, but not their sense). Then the good. The shelter offered to those who lost their houses, the pacifying Muslim I heard on the radio this morning down at the Friday rally following the three murders in Birmingham trying to tell his brethren to love their neighbours.

And the clean-ups. Nothing could be more exhilarating than this shot of Clapham Junction the morning after which has gone global by one Andrew Bayles (not the excellent professional photographer, whom I contacted for permission and who took the trouble to point me in another direction, fruitless as it turned out: I'll just work on the assumption that this is fair use and a further propagation of good unless I hear otherwise). The broom army rules! 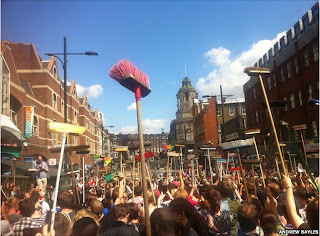 Back to fear, though: it's responsible for so many of the ills in the world. What you fear is what you don't understand. Global markets topple - 'it's not the end of the world', said our heroine C. J. Cregg presciently in The West Wing back in 2004, 'it's the end of a lifestyle'; America becomes a fortress against the Big Bad World; religions and individuals demonise each other without understanding. I appreciate that there are other cultures where fear is, or was, very real, a tool of tyranny, and that can work in reverse: you carry on fearing even when the threat has been removed, so deep-wired is it. What better to illustrate this than Yevtushenko's poem 'Fears' as courageously set by Shostakovich in his Thirteenth Symphony at a time (the Khrushchev thaw) which the composer probably thought he'd never live to see. Rather than use a less than great Proms film with subtitles, I've turned to the Rozhdestvensky recording and reproduce the poem beneath.

Fears are dying out in Russia
like the ghosts of bygone years,
and only like old women, here and there,
they still beg for alms on the steps of a church.

But I remember them in their strength and power
at the court of triumphing falsehood.
Like shadows, fears crept in everywhere,
and penetrated to every floor.

Gradually, they made people subservient,
and set their seal upon all things:
they taught us to shout when we should have kept silent,
and to shut our mouths when we had need to shout.

We were not afraid of building in the blizzard,
or of going into battle while shells exploded,
but at times we were mortally afraid
of even talking to ourselves.

We were not corrupted or led astray;
and Russia, having conquered her fears,
gives rise - not without reason - to even
greater fear among her enemies!

the fear of remaining indifferent to others,
when someone is in trouble or depressed,
the desperate fear of not being fearless
when painting on a canvas or drafting a sketch.

And as I write these lines -
and I am in too great a haste at times -
I have only one fear when writing them:
the fear of not writing with all my power.

Finally, we need a lightening of the spirit again. Farewell for now with Bach's blissful motet 'Fürchte dich nicht' ('Be not afraid'). Here endeth the sermon for today.

Thank you again for this lovely post and poem. Indeed we often forget that the media tends to report troubles as if they were all over when they are isolated. But nonetheless sad, but as someone remarked this is not the first time such violence has happened.

And I only heard yesterday the rather astonishing report that one in ten shops around the country was trashed - if that's right, it's a huge figure.

Out of evil cometh - we can hope - good. So outraged is the nation that the politicians have come together ( my French colleagues commented on the commendable seriousness of the Commons debate) and actions are now possible: tighter policing and regulation ( without the pseudo liberal case that the police are too aggressive - they weren't this time, with the results we saw) and real initiatives on family and school structures ( without the right being able to stop sensible policies). Whether the absence of moral parameters can be cured is more problematical, but in many places in the past the putting in place of proper structures has affected moral behaviour.

One aspect hardly mentioned has been the madness of crowds. A crowd, especially of young men, once fired up creates its own momentum, when as a result of evolutionary programming the individual members find fulfilment in attacking others. Unfortunately the social networks make the bringing together of a crowd so much easier

Indeed - all is flux, and no good comes of standing completely still. It's a shame so much has to be swept away to lay the turf for the new, though.

An interesting viewpoint from Detective Chief Superintendent John Carnochan of the Violence Reduction Unit, Strathclyde Police, as reported in the Sunday Herald, 14th August, on page 11.
"We have all the same factors of deprivation and unemployment here and we have them in spades. But it seems to me that the gangs that David Cameron described were criminal gangs with hierarchical structure and there was criminality in those gangs and guarding their turf. Our gangs are not like that. Here in Glasgow we coined the phrase 'recreational violence'. Fighting wasn't a means to and end, it was just recreational violence. Maybe our guys couldn't be bothered with rioting; they're happy to be having a drink and a fight. So I think the nature of the gangs is one of the key differences."

I see a comment of mine on this post has somehow been lost. Our friends visiting from England live quite near East Ham high street, which was affected, so a cause of great distress, particularly as they were so far away. I would have loved to be able to share your post then, and particularly the Yevtushenko setting by Shostakovich. So moving and appropriate. Thank you.