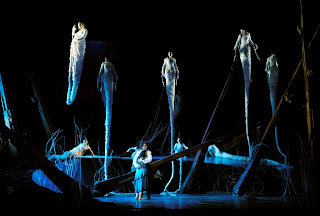 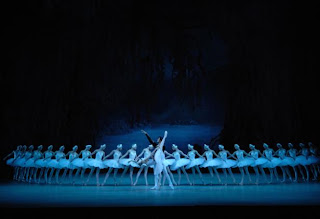 There's a not too contrived link to be made between Dvorak's Rusalka, which I saw at Glyndebourne for the second time yesterday following on from my pre-performance talk, and Tchaikovsky's Swan Lake, which you can hear in anything but its entirety (more anon) conducted by Gergiev at the Proms tonight. The photos are by Alastair Muir for Glyndebourne and Natasha Razina for the Mariinsky.

I was lucky to be able to play to the punters yesterday a hard-to-find recorded snippet* of the reconstructed duet from Tchaikovsky's discarded opera Undine which he used again as the great lakeside Pas d'action of his first ballet (and aptly; Odette, though originally a mortal maiden, is a transfigured creature of the lake whose prince betrays her, in this case with a black-swan decoy). The source is very similar to Dvorak's: a very poignant adaptation of the Melusine legend by De La Motte Fouque. His Undine spawned a whole host of forgotten or rarely-revived operas, starting with Hoffmann's (he of Offenbach's tales - composer as well as poet) in 1816.

It was fun to play the audience, as I partly did two years ago, snippets of water-nymph music more familiar in other contexts - not just Tchaikovsky's but also Mendelssohn's - his Fair Melusine Overture unquestionably influenced Wagner - and Offenbach's (the overture to Die Rheinnixen became the most celebrated of all Barcarolles). I also played them Mackerras's arrangement of Sullivan's Iolanthe music in Pineapple Poll, and asked them to guess the composer. The suggestions were gratifying, and not unreasonable: Wagner? Janacek? Mahler? No-one got it, though one lady who'd loved Sasha Regan's all-male production at Wilton's Music Hall production - the best thing I've seen up to this Rusalka all year - may have been too shy to speak up.

The revival was just as focused, emotional and ravishing as its predecessor. I've written a bit about this on The Arts Desk, but it will do no harm to reproduce this marvellous photo of Rusalka in extremis with her handsome, love-death-seeking Prince; Dina Kuznetsova made the role her very individual own, while Pavel Cernoch stole AND broke hearts with looks and tenderest singing in that greatest of final scenes. 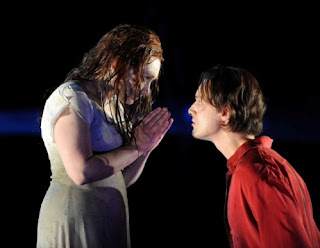 And let's not forget the Wood Nymphs with their bark-rustling skirts and their breast-waggling, leaping dances - love the way Still introduces an element of Bacchic threat into their revels. It's all in the myths, of course, but the way she makes it real is wholly her own. 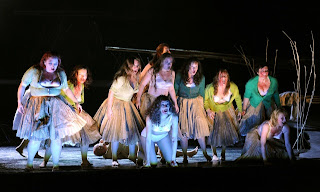 We have to see Still's Wagner Ring cycle some time soon; she'd be the perfect director for it.

And of course Glyndebourne is the ideal place for Dvorak's watery, enchanted-melancholy masterpiece. The lake looked ravishing in both intervals - here's my guest, last weekend's generous hostess Deborah, on either side. As you will have noted from one of the entries below, her own garden 'rooms' give the Christies' a run for their money, and her bronze 'world gone pear-shaped' would look splendid here (they are, in fact, introducing sculptures, but rather cautiously and with mixed success). It was also a joy to walk around with someone who knew the names of each and every plant. 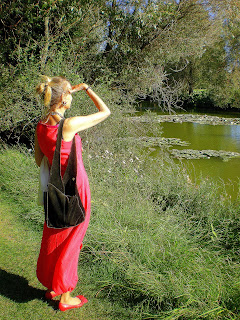 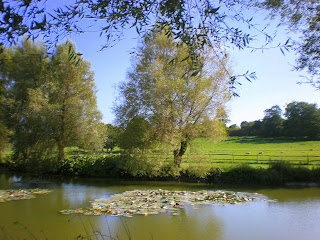 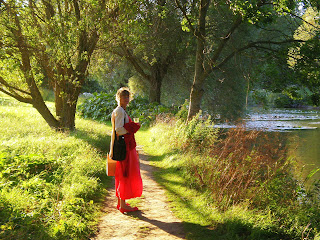 What I hadn't anticipated was stepping out to retrieve the picnic box after Rusalka had sung her last over the body of her prince and being greeted by a full moon rising. 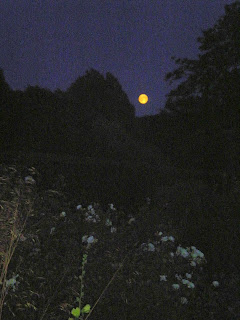 Had to stand, stare and snap at the head of the lake before it was time to pile on the bus back to Lewes. Bit of a contrast here: sharper with flash above, fuzzier but perhaps more atmospheric below without. 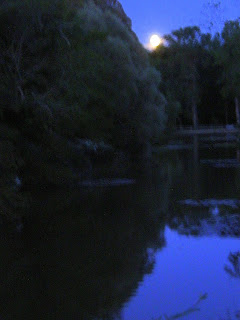 As for tonight, you must know that the Swan Lake Gergiev conducts is still the butchered Mariinsky version of 1894, which has always accompanied the old Sergeyev production incorporating Petipa's and Ivanov's choreography. You might have forgotten musical sorrows when dazzled by so prima a ballerina as Uliana Lopatkina, who came to London for the recent Mariinsky season. My colleague Judith Flanders on The Arts Desk was a little underwhelmed. 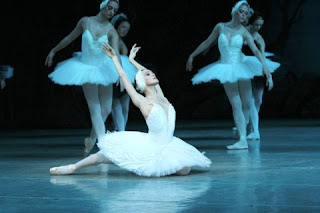 So tonight there'll be no sad dance of swans in Tchaikovsky's originally seamless Act 4, but two totally inappropriate interpolations by Drigo of orchestrated late piano pieces. Plus about a third of the original score cut and reordered. Knowing this, I hope, should soften the blow and help you to enjoy what there is. For full details, you'll have to read my programme notes, which can be read on the Proms website.

It will still be good to hear all this music in the concert hall, but when that's the only opportunity any of us are going to get of catching the entire score live, isn't this clinging to a mistaken tradition foolhardy?

*from an LP in the collection of that great Russophile Richard Beattie Davis, courtesy of his widow Gillian.
Posted by David at 12:25

Thanks for the heads up about Swan Lake. I remember it being a minefield when I worked in a record shop trying to find recordings with particular numbers included. It seems to me that Tchaikovsky’s narrative logic was one of his greatest strengths (I’m thinking particularly of the flow of the first act of The Nutcracker) and as such it seems bonkers for Gergiev, the preeminent exponent of this repertoire (at least in terms of celebrity), to be taking the ‘easy’ option.

My question is – can you recommend us a recording of the ballet in its ‘original’ form? Thanks.

Much the best is Rozhdestvensky's with the Moscow Radio Symphony Orchestra; I only have it on HMV Melodiya LPs, but it did surface on CDS which should be fairly easily available (where I think the orchestra might go by a different name).

Otherwise Sawallisch with the Philadelphia is very handsome and includes the vital 'supplementary numbers' (as does Rozh) including the Act 3 Pas de Deux partly reorchestrated by Shebalin.

Thanks! I'll certainly search out the Rozhdestvensky - I, like you, enjoyed the recent ICA DVD with Act 2 of The Nutcracker and the Beeb.

And another worth catching while you can - IF you still can - is the Melodiya reissue of Noddy Rozh conducting the complete Prokofiev Romeo and Juliet: a mono recording I thought would never see the light of CD day, but it did, just in time for my second R3 Building a Library on the ballet, where it came out tops (LSO/Gergiev being the best of recent versions, with certain reservations).

Just as communism was falling I went to Moscow quite a lot and was taken to Swan Lake at the Bolshoi. And the happy ending, I was told, was imposed by Stalin. Is that the case? Strangely enough, the programme note contained the full original plot.

Kirov was a very attractive personality ( probably that is why he was assasinated, probably by
Stalin) but it is still strange that his name should have survived so long in the post communist world. Is there any stated reason?

Very Monet-esque picture of the irises

No - it was imposed by Modest Tchaikovsky just after his brother's death, for the 1894 revival that finally made the ballet famous.

Where's Kirov come in to it?

The Marinsky use the name Kirov still, I think nowadays for the touring company. See the Wikipedia for Marinsky or Kirov name. Originally the name was given after the death of Kirov, in 1935 and became very well known world wide.

Lovely piece & lovely pics, David! I've been musing gently over the parallels between the Rusalka story and Swan Lake too, so this could explain a bit - will look up the original Melusine. Saw the Mariinsky Swan Lake a few years back & haven't revisited because, incredible though their dancing is, I just can't take that happy ending. Swan Lake leaves you laughin'? Surely shome mishtake?

Thought you might like the tale, Jessica, with your literary sensibilities. The De la Motte Fouque Undine I was delighted to find available in its entirety online:

Tell me, from Tom's perspective, do the LPO like Sir Andrew? I got the feeling they did: a musician's conductor, perhaps, not always blazingly exciting but masterly in many ways.

No, David, the Mariinsky no longer calls itself the Kirov, at least on tour here, though there was some confusion for years after Leningrad became St Petersburg when Gergiev recordings advertised 'the Kirov Orchestra of the Mariinsky Theatre'.

I suppose that they are fading out the Kirov name. However it still appears in brackets in the Mariinsky programme for August 2011

Brackets is progress. I suppose the 'brand' (horrid word) needed handling with kid gloves. Maybe there's also a slight problem with the transliteration of 'Mariinsky' (I prefer 'Maryinsky' but that doesn't work when read out).

Although I was very disappointed that they decided to use this edition, I congratulate you for one of the best Proms programme notes I have seen in a long while.

The Mariinsky Orchestra announced only yesterday that they were going to perform "the complete Swan Lake ballet score by Tchaikovsky". Did plans to use an authentic edition fall through, or was it just overlooked? It seems bizarre that anyone would contemplate this sort of thing in a Tchaikovsky ballet, whereas anything by Stravinsky is sacrosanct.

Your writing about this performance is gorgeous, the photographs wonderfully atmospheric, and with this, you offer a stunning coda: "What I hadn't anticipated was stepping out to retrieve the picnic box after Rusalka had sung her last over the body of her prince and being greeted by a full moon rising." Thank you for bringing those of us who weren't able to be there up so close.

I am also fascinated by the brazen dismantling of Tchaikovsky's Swan Lake that you describe here and in the program notes. It does seem odd, at the least, that Gergiev wouldn't restore the original to listeners.