The phantasmagoria of George Saunders 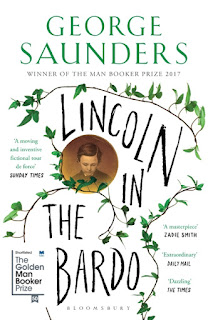 Distinguished writers can be as misleading as anyone when it comes to puffing people in their profession. I'm sure Zadie Smith reveres George Saunders, until recently confined by his own choice to the genre of the short story, even more than I now do. But it was frankly silly of her to declare that 'not since Mark Twain has America produced a satirist this funny'. Hello? Kurt Vonnegut? Philip K. Dick (whom I regard more as satirist through dystopia than a 'sci-fi author')? Without their examples Saunders' earlier work would surely not have been possible. But he has at his previous best equalled them in imagination. And with Lincoln in the Bardo, the full-length novel which won the 2017 Man Booker Prize, he seems to have produced 'a masterpiece' (Z Smith again, and I'll give her that one). 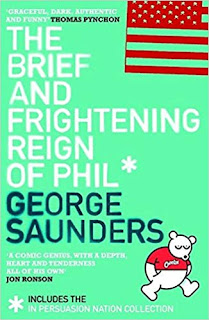 First, a bit about what I read after that - chiefly The Brief and Frightening Reign of Phil, which I'm glad I bought in an edition also including the 12 stories of In Persuasion Nation. Were one playing the 'first line of a book' game - details available on request if you don't know it - the real entry would probably stand out a mile when it comes to Frightening Phil:

It's one thing to be a small country, but the country of Inner Horner was so small only one Inner Hornerite at a time could fit inside, and the other six Inner Hornerites had to wait their turns to live in their own country while standing very timidly in the surrounding country of Outer Horner. 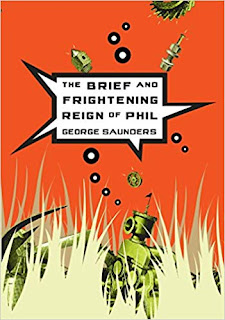 Casual introduction of alien vocabulary is very Dick-ian, and we soon take it for granted that the dramatis personae are made up of odd mechanical bits and pieces: the bolt holding Phil's brain in place 'on his tremendous sliding rack occasionally fell out, causing his brain to slide rapidly down his rack and smash into the ground'. So when nasty things are done to the Inner Hornerites, the 'dismantling' keeps explicit brutality at bay, but still somehow horrifies. Enough on that story; suffice it to say that border issues and the character of Phil, such as it is, keep it topical.

The tales of In Persuasion Nation range from the comically disconcerting to the downright disgusting. The territory, in which commerce and mind-control come together in a sometimes plausible future, is familiar; I wonder if Charlie Brooker knew them and did likewise in Black Mirror (with very mixed results). But in the context of what's to come, the sudden deaths and casual slipping into Saunders' very own version of ghostlife at the very end of the last story, 'commcomm', show us where the essential weirdness of Lincoln in the Bardo comes from. 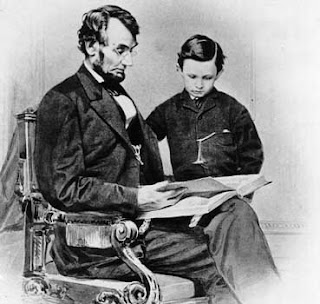 There's a difference, though, not just in terms of metaphysical scope but also in the setting, a very specific past time and happening, February 1862, and the death of Abraham Lincoln's 11-year-old son Willie. Not having read much about the construction, I was baffled at first: who's speaking, where and what is this character, that character? Ghosts, of course, stuck in a peculiar limbo and manifesting visuals - a gigantic member, multiple heads - which no film could easily render (I see from the below that there's been an attempt, but it limits what can be done, while Saunders' verbal imagination takes you much further). 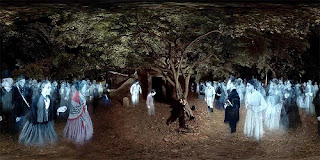 There are incredible passages - well, it's all incredible, but I mean that in the sense of transcendent: the 'matterlightblooming phenomenon' with which angels whisk up some of the lost souls in the cemetery; the recollection of the past which an action of ghost-Willie brings upon the others towards the end of the fantasia. Why they choose to remain is unclear - vaguely, it's about to clinging on to life without realising you're dead, as I read it. But as in great poetry, you don't challenge the sense. 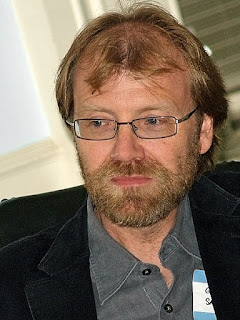 Saunders uses all this to give us a wide panorama of American life and characters both of that time - recounted in selections from the literature about Lincoln - and before it. There's also a very moving connection between Lincoln and two of the 'shard' souls, the spirits of black slaves. But to tell more would be to take away the magic. The aura remains. Buy the hardback Bloomsbury edition if you can, a beautiful piece of book production, and set aside a day to read it.
Posted by David at 22:05

I was at first skeptical of the Saunders as probably over-hyped, but glad I ventured in, as I found it brilliant. Another I found a terrific read after, again, a worry that the book was over-hyped, was Colson Whitehead’s The Underground Rairoad. Then, in conversation with one of the many knowledgeable students who staff our local independent bookstore, I was told if I liked that, I simply must read Mohsin Hamed’s Exit West. He was right—it handled the transit from real to fantastical and back again even better than the Whitehead. Most recently, I read Vargos Llosa’s latest, The Neighborhood, which I felt way over the top and don’t recommend, but I have to say that on the heels of reading it the Bezos/National Enquirer story erupted, which gave the story more credibility—though I still think what he really wanted was an excuse to write something steamy, Now I’m on to one of those doorstop books, Michael Massing’s Fatal Discord: Erasmus, Luther, and the Fight for the Western Mind. It’s so far very interesting, though I do find it hard to keep at it. Not sure if I’ll get all the way through, though I believe, from what I’ve read so far, it would be worth it.

What a splendid list to follow up - any recommendations from people I know and respect are worth heeding. Vargos Llosa is the only name I recognise, and he doesn't come out so well... Nearly finished Simone Veil's simply phrased and lucid My Life: what a truly great human being.

I immediately thought of adding James Thurber and John Sladek to the, so far, exclusively male list but I'm sure it could easily become more diverse with a bit more thought. Perhaps Dorothy Parker was more a wit than a satirist. I'm still struggling with a slight aversion to Saunders after he pipped Carla's friend to the Booker. Irrational prejudice I know which your recommendation will surely now overcome. Catching up on your recent posts and wishing you all the best of health and hoping you don't have to wait much longer!

Thanks, Howard, and good to hear from you after so long. Who was/is Carla's friend? The choice of 'winner' always seems to me as pointless as any other award. You can't really compare incomparables. The main thing is to get people reading the candidates' work. I can think of British women writers who might fit the 'top satirist' bill but no other Americans come to mind. Maybe A. M. Homes squeezes in? But then I'm not conversant with the literary scene across the board.

I agree about "winner" in literary as in other "competitions" but one has to remember that competitions and winners attract wide attention whereas scholarly analysis of this or that virtue does not. My own approach is to conclude that the emergence of (say) the top five has some meaning, as opposed to all the others, and who wins out of the five is not important

It's Fiona Mozley from York whose first novel Elmet surprisingly made the short list, but of course the publicity was just as good as the prize, and it would have been pretty mindblowing if she had won it as well! Me neither, but interesting that it's a male dominated field. Do Gore Vidal and Joseph Heller count? I can only think of one satirical book by either, and I've not heard of A M Homes.

That was my point, David, that these awards get people interested and reading. Even the top five in a field as wide as the novel is still somewhat arbitrary; none of the judges can read everything, or even very much. I heard about one judge who said she got a pretty good idea of whether the book was worth pursuing after about 20 pages.

Howard, get you some A. M. Homes immediately. She can be tough in her subject matter, but This Book Will Save Your Life is both laugh-out-loud satirically funny and also feel-good in not too mushy a way. Yes, Gore Vidal would count, though I'm not sure in the same league. Joseph Heller, certainly. Is FM's book good, in your opinion? You must have read it...

Actually no, although Claire had a pre-publication early e-copy. What I read and heard of it put me in mind of classic steeped-in-the-landscape Alan Garner's Cheshire based novels, although his are far more mythic. But somehow without a deeper otherworldly element, Elmet's dark rural thuggery didn't appeal much.

Incidentally Garner's reaction to getting a literary award is "awards are an irrelevant impertinence, a distorting imposition on a book, and I want every one I can get"...