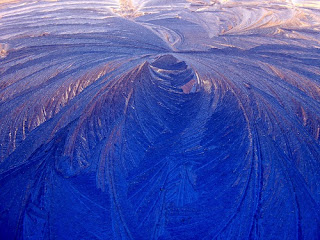 I prepared to do what for me at the moment, with the stent still limiting exercise, was a big walk to Chelsea and Westminster Hospital and back last Wednesday, and it was a remarkable day for it.  Snow didn't settle here, but frost following a night of rain and wind had created astonishing patterns on the roofs and bonnets of cars just outside the flat, like the one above in the shade and this on the sunny side of the street, which could be mistaken for an aerial view of the Alps from a plane window. 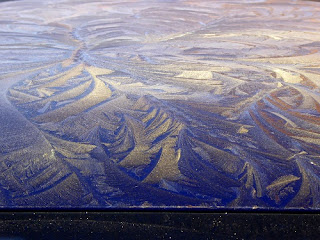 J accompanied me as far as the north gate of the cemetery, where there's now a rather chic little cafe with vistas down the alleys southwards. I've managed to conceal the extensions either side here; the cafe is behind the trunk of a big plane tree. 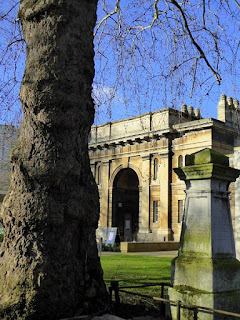 Vegetation on those graves still in the shade was attractively frosted 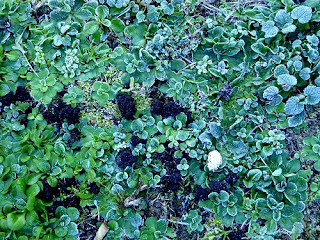 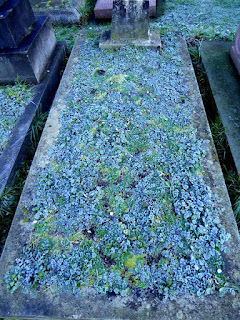 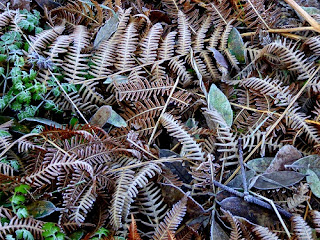 but in the full sun, the snowdrops were thriving. 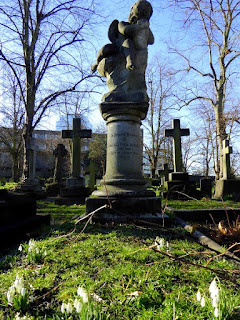 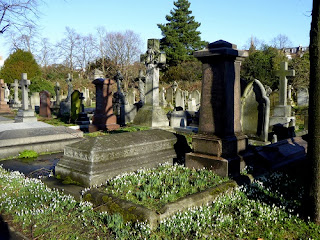 Intriguing mosses and lichen on stone. They thrive in graveyards because of the absence of pesticides/herbicides. 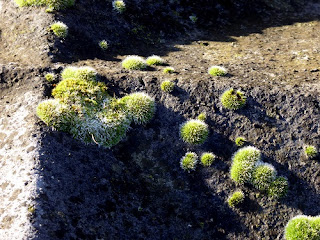 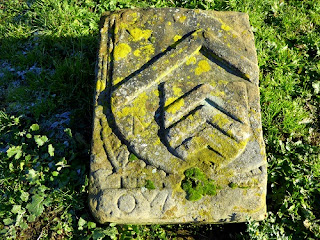 The avenue fringed by London planes, leading to mini-homages to Bernini's piazza and St Peter's itself, told me why I think of late January to mid February as a golden-brown sort of time; the incipient leaves are that colour. 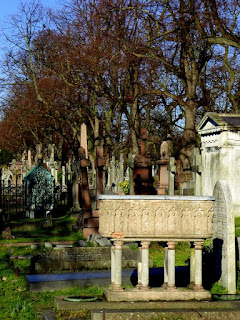 The path I'm photographing contains two interesting monuments off to the right, including the above to Valentine Prinsep, which turns out to be a copy of a 13th century Sienese original - I included it in a much more galanthocentric post some time back - 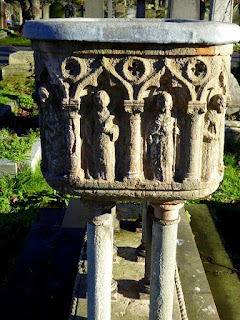 and, undoubtedly the cemetery's finest artwork, Edward Burne-Jones's design for the resting place of art patron Frederick Leyland. This, too, I blogged about as far back as 2009, but the sharp winter light helps define the patterning. 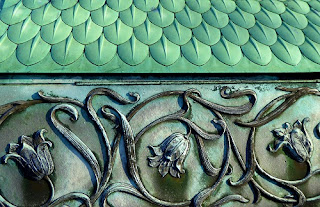 The path to the south, looking towards the west colonnade, 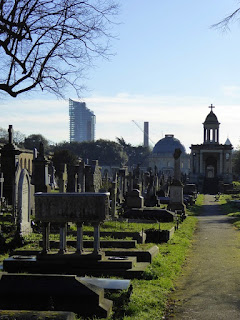 and a nearby broken column. I understand from paintings that it symbolises the decline of the classical with the coming of Christ - or so I'd thought, though J says that in this context it can stand for a life cut short - but here the comparison is with towering new construction taking place all around this protected ground. 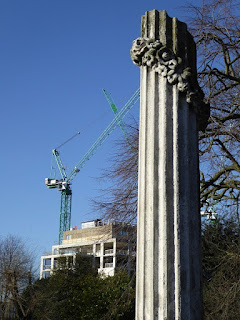 So towards the oval 'piazza' - looking north 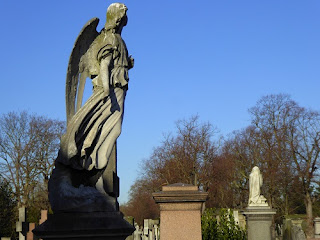 and past what I take to be Faith, Hope and Charity. 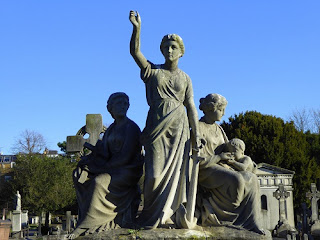 The angel whose hand 'holding' a bunch of daffodils I featured at the end of the blog post on Stephen Johnson's new work holds it still. 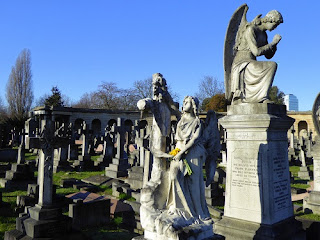 Colonnade from the south end 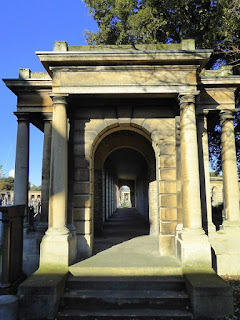 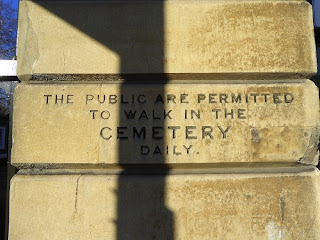 before I pressed on to the hospital (good news, by the way: I heard on Friday that the operation is set for Tuesday 12 February. Only six more days of this restricted lifestyle to go. 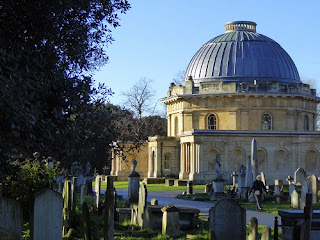 passing more promise from the copper beech which is always so beautiful in the summer, 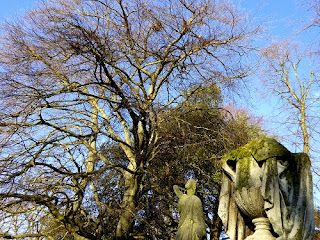 I took a route through the eastern quarter, which gives different perspectives on  'St Peter's' and with its pine trees against a blue sky suggests more Mediterranean climes, especially by the lion memorial. 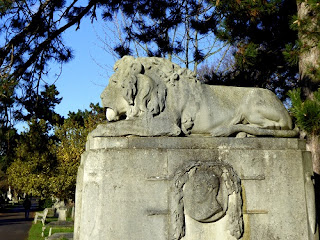 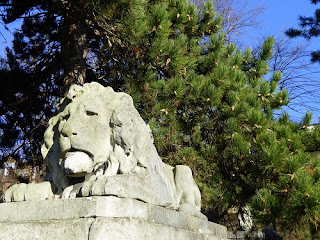 There are some smaller-scale monuments here. 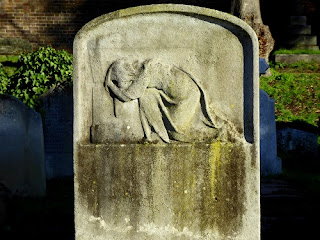 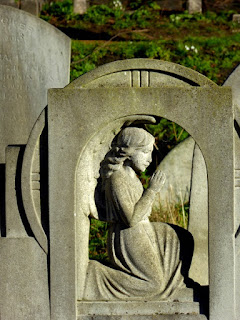 The vegetation on this side, all ferny, will grow lush in a few months' time. Meanwhile, nearing home, the magnolia stellata is in bud. Hope the frost doesn't get it. 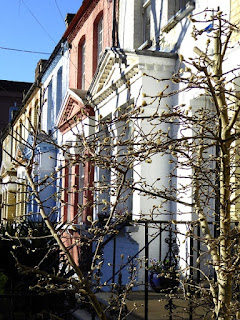 And now we - or most of us - are cremated and, if not anonymously scattered - the most we get is a plaque. A friend was once taken by a remote relation of the King of Spain to the tombs of the royal family in the Escorial. After a long walk to a fairly distant and then empty shelf he pointed proudly "And this is the place for me". Is there some emotional satisfaction in knowing that one will be buried in a known place?

For many people, yes. I was thinking of poor Katya Kabanova, envisioning birds singing above her grave. I like to know that my dad's ashes are buried in a casket beneath the west end wall of All Saints Banstead. My ma never had a plaque done for him, and nor did I in my adulthood, but I promised her that she can 'join' him and I'll have one inscribed for the both of them. I still can't even figure out if I want to be buried or cremated.

See (SPOILER NOTICE) The Vanishing. Verdi makes it all rather sweet at the end of Aida...

Norma chose the other method

And Brünnhilde. Thus we go from ice to fire.

Well as you well know from posts I've done over the years I have a fondness for cemeteries - I love the stories they tell of people, times and places. I do wish that blogspot had a "reblog" feature but with your permission I'll do a post with a link to your wonderful photo essay?

That's kind, Will, of course. I need to visit the other London greats - Kensal Rise and the part of Highgate Cemetery with the (recently defaced) monument to Karl Marx. Today I've been giving four lectures on music around the Russian Revolution and played Prokofiev's wonderful melodic setting, in his outlandish Cantata for the 20th Anniversary of the October Revolution, of Marx's 'Philosophers in their different ways used simply to explain the world, but changing it is what it's all about'. One of the students checked it out and it's inscribed on the monument.

Can storied urn or animated bust
Back to its mansion call the fleeting breath?
Can Honour's voice provoke the silent dust,
Or Flatt'ry soothe the dull cold ear of Death?

Hate to point out that you quoted that the last time I did a cemetery post...but it's a good 'un.

Anyway I cycled through the cemetery again this morning on my way to find out why the op I was supposed to have today got cancelled without anyone telling me. I found out by chance yesterday after four attempts to get through to the appointments person to ask whether I was to have a local (as the wholly wrong letter put it) or a general (as the consultant said) anaesthetic. My visit today was at least successful - I got another appointment on the 25th and gave them the sample they should have asked for last week to check that an extra infection they'd been treating me for had cleared up. Terrible lack of co-ordination, though.

Came back through OBC a lot happier and ate a bagel on a bench in the sun surrounded by tombstones, snowdrops- and even a few early daffs.

She does indeed, though I've not seen the grave. Other famous incumbents include Emmeline Pankhurst and Richard Tauber (both hard to miss on the left if you enter through the north gate). I love it that there are quite a few names which are shared with Beatrix Potter's characters - she used to stroll here when she lived close by in the Boltons (there's a plaque on the wall of a modern school there).

A wonderful walk—and heartening to learn the snowdrops are out. The Burne-Jones design is stunning in the light. Sorry to hear your appointment was postponed, and knocking wood all stays on course for 2/25.

Thanks, Sue - I doubt if I'll be walking through the cemetery on my way to the op as it's at 7.30 in the morning and the gates won't be open. And I certainly won't be walking back after the general anaesthetic - though I remember that the day I had my stent removed two years ago (under local) I skipped back, feeling instant relief. It will be so good to be able to walk for longer and cycle.