Mirga and DG: a contract to get excited about 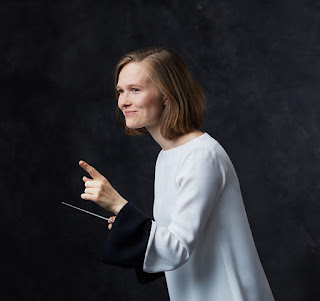 OK, so when Andris Nelsons signed up to Deutsche Grammophon, fine, wise choice on the company's part, but did the world need more recordings of Bruckner and Shostakovich symphonies (good as they are)? When his Lithuanian neighbour to the south of Latvia Mirga Gražinytė-Tyla (pictured above in what seems to be a nice new image by Andreas Hechenberger) brokered her deal, news of which has been released today, she clearly had take-it-or-leave it ideas about the repertoire she wanted to record.

Repertoire which will actually enrich us rather than just give another 'conductor's interpretation of...' (though I'd have been very happy if they'd gone for her individual and loving way with the Tchaikovsky ballets). The first release in May will be of Weinberg's Symphony No. 21, which the composer tentatively suggested might be called 'Kaddish', with the combined forces of the CBSO, Kremerata Baltica and its presiding genius Gidon Kremer - I raved about the live performance, coupled with Shostakovich's Fifteenth Symphony, here on The Arts Desk - and his Second Symphony (Kremerata Baltica only). Next are works by Mirga's fellow Lithuanian Raminta Šerkšnytė with the Lithuanian National Symphony Orchestra , Vilnius Municipal Choir and Kremerata Baltica. DG haven't specified what 'works by British composers' will be on the cards in the third project, to celebrate the orchestra's centenary. 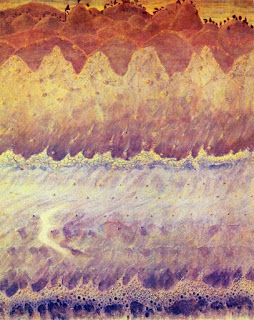 It was serendipitous news on a day when I was working on a note for the performance she'll be giving with the CBSO of The Sea by Mikalojus Konstantinas Čiurlionis (1875-1911), her country's greatest composer. I'd expected to find this half-hour symphonic poem a bit wispy and second-rank, but it's astonishingly good. Listening to two recordings (by Svetlanov, right up his late romantic street, and  Gintaras Rinkevičius with the Lithuanian State Symphony Orchestra he founded in 1989 - I presume that's the same as the 'National' SO cited above), it's obvious how the young composer had absorbed the sound-worlds of Strauss's Also sprach Zarathustra and Ein Heldenleben. Yet he eventually makes something of his own in the hypnotic nocturne that follows the storm. 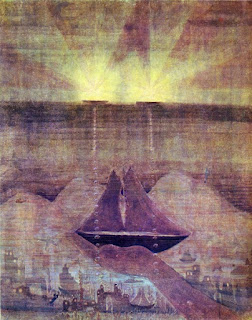 Not sure what to make of the art which took over in the final years of Čiurlionis's all-too-short life - he was committed to a psychiatric hospital with a severe bout of depression in 1910, and died of pneumonia there the following year, having never seen his baby daughter - but clearly there's a synaesthesic connection. The two above pictures are part of A Sonata of the Sea, painted in 1908. The first is entitled Allegro, the second Andante and the third Finale. 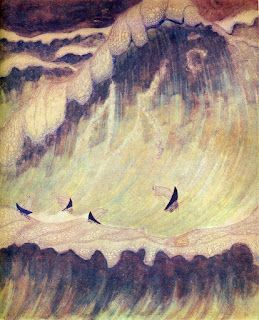 This gives a further fillip to my longing to visit the third of the Baltic countries - the first two, Estonia and Latvia, I love and respect beyond measure - to see Čiurlionis's house in Vilnius and the gallery containing his pictures. I also ought to think of travelling up to Birmingham to hear the concert, since I'm hooked on the work now. Here's Svetlanov's performance, a bit rough around the edges but right in spirit.

The Baltics certainly seem to offer a cornucopia of musical talent. Čiurlionis's artwork is intriguing, and I look forward to listening to The Sea.

Your TAD review of Mirga Gražinytė-Tyla's program is tantalizing, and your lines about Shos 15 give perfect expression to the impact of its closing: "the mortally ill Shostakovich's real gift to eternity are those moments where time becomes space - and never more than in the percussion tattoos of the end, a final stroke of glockenspiel, celesta and triangle telling us, as in a Russian liturgy, that the service is ended just as it began."

I can't say I much like his paintings, but they're singular. And by quoting me you make me go back and change a mismatched plural 'are' to a singular (I think 'lies in' would be better).

Mirga has a gift for great programming. Her Prom in 2017 was a real highlight, ending in a Beethoven 5 like no other, though what I remember most is Gerald Barry's funny-profound 'Canada'.

C's work reminds me of some of the works at the outsider art fair we attended in NYC recently. Curious is a good word to describe it.

As to the grammar item you note, I didn't even notice it!

Oops! I meant to say "singular," not "curious," though come to think of it, both would apply to C's work.

If nothing else, it was unusual for the first decade of the 20th century. Become something of a cliche now.

I should have been at the 2016 one but I was rushed into hospital at the end of my Bodrum Festival stay and had solved in two days the same kidney problem that has so far taken five weeks here. Luckily I had my laptop and could tune in live on the iPlayer:
http://davidnice.blogspot.com/2016/08/hearing-mirga-from-bodrum-hospital.html

This year's she had to pull out of because of maternity leave. Glad she's back in fine fettle. Such energy!

I remember that blog post, and now the difference in resolution of the kidney stone episodes seems pretty damning of treatment for the most recent. Your review of the Proms concert brings it to life—and I was amused by the exchange in the comments, too.

Your delight in the Baltic States highlights the fact that on many measures the winners are small countries ( by population, hence Canada and Australia can feature ). On the Transparency International index of corruption, the top ten ( for low corruption) are all small, and in the next ten only the UK Germany and Japan are not small. The same results are seen in the various surveys of which countries are the best to live in ( again UK Germany and Japan appear, but only after the top ten). One can speculate that those living in smaller communities have a better sense of identity. In the case of the Baltic States there is also the point that they have recently been released from prison, and they must have a strong feeling of happiness and freedom every time they wake up

Beautifully put. I think they do, though until recently when with the help of vilified Soros they could feel fully stable there was unease about Russia, which is never entirely going to go away while Putin is in power. But as I saw pointed out somewhere yesterday, they seem to be on top of Russia's cybercrime and know all its tricks (for now). Plus they are young nations, and part of that is they don't have to shuck off the baggage of patriarchy. Which is why, when I attended the first concert in Estonian Music Days four years ago, and not only the performers (from Iceland, with another even smaller population) but also five of the seven composers were women, and I expressed my surprise and admiration, they said 'we don't even think about it'.

I note that small countries dominate to top rankings on Democracy and also on Freedom, as well as on corruption and as good places to live, as above. So, although some of these rankings are probably full of some contestable assumptions, one can see that there is an over-riding force in favour of small nations. Clearly there can be a greater sense of community if the nation is small, and sensible ideas can more easily permeate. It is, as a separate point, noticeable that the UK though not at the top of these lists is always among the leading nations, with Germany the only other large nation often seen in a similar position. One should hold this in mind when reading criticisms of this country. It is also the UK and Germany that are often the main countries in which refugees and other migrants want to live. Of course these two nations are also rich, but so are other countries which do not rank well in the lists.

Some small countries are also impervious to immigration. The Baltics don't have much experience of it, though I notice some eastern entrepreneurs are coming through in Tallinn. I'm sure the will to accept them is there - relations between ethnic and Russian Estonians are now good.

One suspects, or hopes, with MG-T and the DG contract that her name alone has such cachet and PR-value, compared to Yet Another Male Conductor (as terrific as YAMC's like Nelsons or Dudamel can be), that album buyers will be interested in whatever repertoire that she chooses to record, as opposed to more of the standard repertoire, as you said. In other words, she could potentially record some totally obscure avant-garde composer and people will buy it.

Have been totally out of the touch with the news about your health issues. Very sorry that you're going through all that. Hopefully things are less worse.

The Baltic invasion here next year with the SLSO is limited to a return from Baiba Skride. We are set to get Jennifer Pike as another guest violinist, in her first visit to STL. Deneve is in town for 2 weeks, and he led a terrific concert this past weekend, where he paired RVW's The Lark Ascending and Serenade to Music, with no applause in between. The Brahms 2 in the 2nd half was being recorded, and I heard something about a Naxos rep being in town this weekend. Also, the hope is that with Deneve about to take the reins formally as music director, he can keep the honeymoon phase going and not go "full music director", i.e. get too nit-picky.

Oh, I do miss Deneve - should never forget that he's always in the running as among the top conductors. Lovely idea to run those two VW idylls together. As far as Mirga's rep goes, the second Lithuanian composer she's recording I've never heard of, so have no idea what kind of music that is - communicative, no doubt...

And thanks for your concern. I'll be so relieved to have the op (scheduled for Tuesday, earlier than expected) because movement is restricted with the current stent. Then I can cycle and walk as I like.