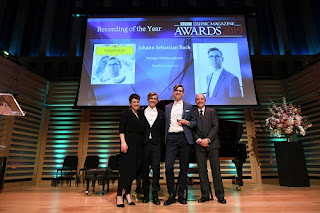 Last month's BBC Music Magazine Awards helped me to get to grips with what the panel - on which I served for the 2017 selection, not this year's - thought essential listening from the glut of five-star CD reviews. Out of the two I'd reviewed, the one sure winner - Adams's Doctor Atomic - didn't get the Opera award and the other which I wouldn't, when it came down to three choices - Ádám Fischer's Mahler One in his Düsseldorf cycle - took the palm  in the Orchestral category. And Sean Shibe was superseded for the second year running, this time when an even more inventive and ground-breaking mix of ancient and modern, the softLOUD programme, was the option. 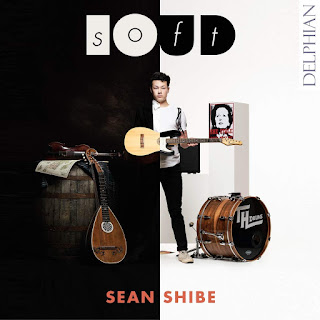 Predictions were that in this public vote, social-media-savvy Vikingur Ólafsson would triumph among the three instrumentalists on the final list. Not only that, but he took the Disc of the Year award for his fascinating Bach sequence (up top, he's third from left with Sara Mohr-Pietsch, his shorter double Gareth Malone and BBCMM Editor Olly Condy). 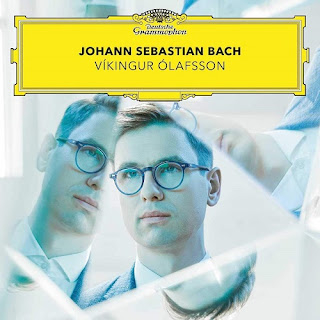 I like and respect Ólafsson. He speaks persuasively and with dignity, and writes well too. I enjoyed meeting him in Reykjavik at his impressive summer festival in 2016. On 1 May he played a 45 minute sequence of works from the 77-minute CD without interruption to an audience of mostly young people in the Royal Albert Hall. Yes, the sound was amplified - much better, as the Proms constantly prove, to hear a solo piano without sonic assistance in that vast space, drawing the listener in - and what followed after the interval seemed to me pretty dire, movements from Bach's Cello Suites muzaked by cellist Peter Gregson, appearing with a group of fellow cellists and a double-bass player, perfectly good in themselves. 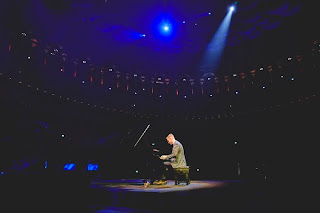 Ólafsson, though, has integrity. His palette is varied, his fast runs astoundingly even. But even while I admired both the sequence and especially his own arrangement from Cantata BWV 54, 'Widerstehe doch der Sunde'. It's on YouTube but doesn't seem embeddable here, so here's a link. But to find the missing spiritual inscape you only had to turn to İdil Biret's selection of Bach transcriptions by her great mentor Wilhelm Kempff. Here are the elusive space and the fuller sonority  that I, at any rate, want from this music. Just one example will have to do here, though you can find others.

I heard that interiority again at the start of young Martin James Bartlett's debut disc 'Love and Death', with Busoni's transcription of 'Ich ruf zu dir, Herr Jesu Christ', BWV 177. But I jump ahead of myself into 2019; that CD deserves proper consideration in its entirety. As far as the awards ceremony was concerned, I wanted to hear viola-player Antoine Tamestit, one of my favourite live performers of 2018 for his walkabout interpretation of Berlioz's Harold en Italie at the Proms with John Eliot Gardiner and the Orchestre Révolutionnaire et Romantique, in Jörg Widmann's Viola Concerto and again in late Debussy chamber works shared with other very impressive musicians. Tamestit is among the other award winners, trophy on piano, in the below photo taken from above in Kings Place's Hall One. 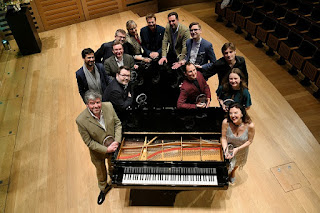 Cellist Laura van der Heijden, winner of the Newcomer Award (and pictured on the right behind Tamsin Little), has produced a thoughtful disc of works by Russian composers from 1948 with Petr Limonosov; introducing this former BBC Young Musician of the Year winner, Julian Lloyd Webber reminded us tartly of the gulf between the first competition, shown on BBC One, and now, when it's ghettoised (though thankfully other events have come along to give the phenomenal Sheku Kanneh-Mason the wider acclaim he deserves),

Last year I heard some imaginative programming on CD which either didn't make it to the above shortlist or, in one case, was released a few years back (but I make no apologies, since the experience dates from the time of discovery). 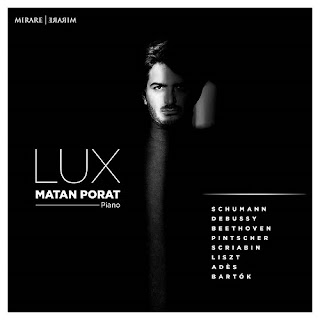 Another musician who thinks very carefully about his concert and CD programmes is Israeli pianist and composer Matan Porat. Lux engages 12 pieces to take us from dawn to night. Gregorian chant is followed by Schumann, or framed between Bartók and Beethoven; Adès' Darkness Visible makes a startling sequel to Liszt's Harmonies du soir, superbly done. 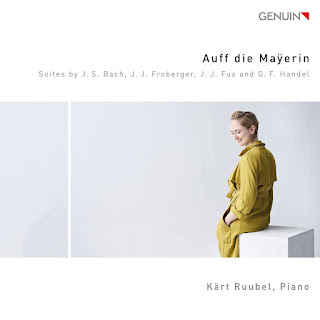 I was so pleased last year to make the acquaintance of Estonian pianist Kärt Ruubel, twin sister of violinist Triin; their joint lunchtime recital in Berlin's Konzerthaus was an unanticipated highlight of my time at a Baltic festival there. Triin is especially keen that the works of Johann Jakob Froberger, subject of a musicological paper she wrote to complete her piano studies at HMT Rostock, should be heard alongside Handel and Bach, and so they are in her debut disc. The Lamentation in F minor has become a firm favourite; there's an extraordinarily modern progression or two, the play of major and minor is beguiling, and the freedom of Ruubel's playing adds to the freshness. 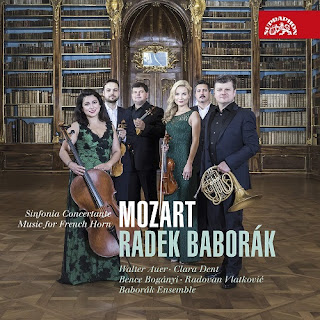 There are several candidates for 'world's greatest horn player', and Radek Baborák is certainly up there. Creative in so many spheres. he has followed up the expected Mozart Horn Concertos with a perfectly programmed two-CD set of other Mozart horn music. Movements make up other possible 'concertos', the second disc ends with the Sinfonia Concertante for wind and orchestra which I've long had a soft spot for, and the 12 Duos for two French horns are split across the discs and shared with no less a master than Radovan Vlatković. The set also includes some of the most exquisite high-register playing I've heard, and some wacky cadenzas. 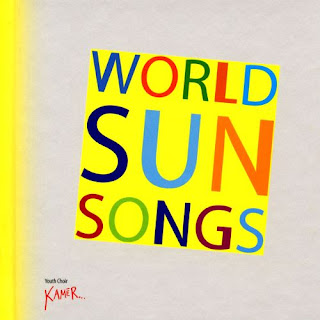 The set of longer standing was a gift from our dear Latvian friend Kristaps Ozoliņš, understandably a fan of the astounding native youth choir Kamēr. Latvia's abundance of folk songs about the sun led to the commissioning of 17 'World Sun Songs' from international composers, among them Leonard Desyatnikov, Dobrinka Tabakova, Giya Kancheli, Peteris Vasks and John Luther Adams (the stunning Sky with Four Suns that launches the second CD).

There is no stronger choral tradition than Latvia's in the world; I experienced it writ very large indeed last summer and I've just heard the superlative Latvian Radio Choir give one of the best programmes of contemporary works in the stunning surroundings of Tartu's St John's Church as part of the Estonian (this year World) Music Days festival. But that's another story.
Posted by David at 17:01

Lots here I don't know, but one I feel lucky to have heard live was Tamestit in Harold en Italy. His walkabout performance (love your word choice) could have been mannered in someone less able, but with Tamestit it felt organic to the work, as if a walkabout had been an instruction in the score.

(1) Can you elaborate on whether to amplify piano in the Royal Albert Hall? Your sentence seems to argue against, and then mentions the vast space

(2) This sort of ranking - like most rankings in other fields - are probably invalid as between one candidate and the next in rank. I would say that unless there is a candidate that outshines by a clear margin the more valid judgement would be to say that the top three or five are the equal winners. But that would not be so newsworthy/exciting

Sue - Berlioz would have loved it, given the theatrical dimensions to so many of his concert works (he even writes stage directions in 'L'enfance du Christ') and it must have been JEG's idea, since he loves the dramatic dimensions of concert space.

David - I do indeed argue against amplification of any solo instrument in the Albert Hall. Piano AND violin unamplified have worked a real magic during the Proms. As Barenboim said, you shouldn't force out into the Albert Hall; bring the audience in to you. And with amplification you lose some of the natural timbres of the instrument.

I also agree about 'winners'. And there may for instance be two outstanding discs in one category (Shibe AND Olafsson, for instance) and none in another (the orchestral seemed to me a bit so-so). As when I did Building a Library for Radio 3, the actual winner was the sop to the wider public; the main purpose of such events is to publicise classical music and the still very lively recording industry around it.

I agree about amplification. One might otherwise stay at home and listen to a CD

Exactly. I gave up on what is loosely called 'world music' live years ago. The trouble is that some of those groups - Taraf de Haidouks and the Afro-Cuban Allstars were primary offenders - brought their own amplification systems and drove the excellent sound technicians of the two halls in question to distraction. So much better on the CDs.