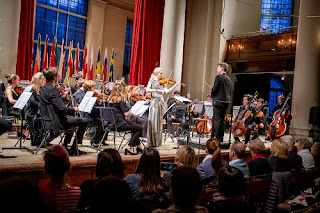 And kicking, or rather dancing and riffing, in the most electrifying official finale we've had at St John's Smith Square in the past 11 years, a fine way to celebrate the fact that the UK didn't leave the European Union on 29 March. When Jonathan Bloxham, our superlative conductor, announced a Norwegian soloist for the wacky arrangement by Cristian Lolea (violin and strings) of Enescu's First Romanian Rhapsody, I ummed about the nation - not exactly EU. Then he told me it was Eldbjørg Hemsing, who wowed both live (in Bodø) and on her CD championing a concerto by compatriot Borgstrøm (the coupling on the disc is a first-rate performance of Shostakovich's First Concerto). Top notch, pure class, with a poignant unaccompanied encore of Grieg's 'The Last Spring'. The fact that she was playing with young equals, the pan-Europeans of Jonathan's Northern Chords Festival Orchestra, led to improvisatory fireworks with leader Agata Darashkaite and cellist Sébastien van Kujik. 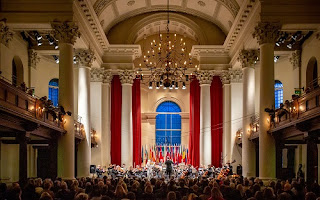 The theme was '25 and under: young European composers', because youth seemed like a timely theme for celebration. No shortage of great examples here: Jonathan opened with the Rossini-esque first movement of Schubert's delicious Third Symphony, one of the six he completed in his teens, and as mid-point we had Mendelssohn's Legend of the Fair Melusine, the water-music of which indisputably influenced Wagner when he started his Ring in the depths of the Rhine. Both catered for a brilliant regular, first clarinettist Joe Shiner, whose first solo CD is due out soon. The wind as a whole were superb, as they have been for the past three years; flautist Sarah Miller, oboist James Hulme, bassoonist Carys Ambrose Evans and horn-player Stephen Craigen joined Joe for the best performance I've heard of Estonian Erkki-Sven Tüür's Architectonics I. Erkki-Sven had been dubious about unearthing this relatively early piece of his, describing it as 'naive', but the response of so many in the audience proved its durability. 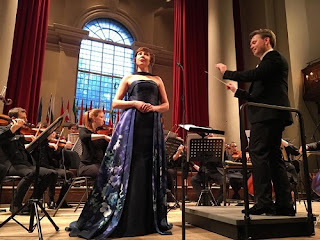 The interpretation of Lili Boulanger's D'un matin de printemps also left others I'd come across way behind; I heard this delicate fantasy in a completely different light. Sure, it sounds like filtered Debussy, but also has more of an identity of its own than I'd thought. The other favourite choice of people I spoke to - musicians and not - was soprano Valentina Farcas's exquisite delivery of the aria 'Dopo l'oscuro nembo' from Bellini's first opera Adelson e Salvini, later reworked for Giulietta in I Capuleti e i Montecchi. Valentina was representing her native Romania, which currently holds the EU Presidency. I heard her float a gorgeous line in 'Ihr habt nun Traurigkeit', for me the highlight of the 150th anniversary performance of Brahms's Ein Deutsches Requiem in its original location, Bremen Cathedral, with Paavo Järvi conducting the Deutsche Kammerphilharmonie (Matthias Goerne was at his most committed, too). 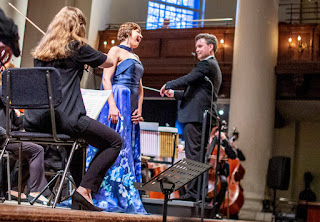 That gave plenty of promise for true bel canto style, and the way emotion informed what was sung brought tears to my eyes in a way that rarely happens for me with Bellini or Donizetti. Rossini is in a league apart, though, and Valentina returned to treat us to Amenaide's big scena 'Giusto Dio' from Tancredi. She was very sincere in her praise for the way that Jonathan provided perfect stylistic support in this repertoire, in a way - she said - that many top names on the podium have not. In fact his adaptability never ceases to amaze me. This time I didn't attend the afternoon rehearsal, so each performance gave fresh cause for wonder. A personal favourite, Elgar's 'Fairy Pipers' from the first Wand of Youth Suite, brought more period-conscious yet breathing portamento then I've heard before. So exquisite, and counterbalanced by the rugged string sound for Bartók's Romanian Dances and the Enescu. 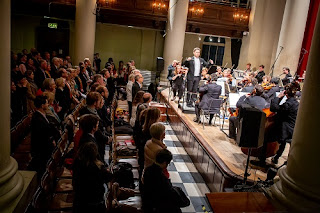 And finally, the European Anthem, this time more truly an Ode to Joy after last year's unanticipated minute's silence at the end. The Romanian Ambassador's speech came at the end, rather than at the beginning as is customary, and gifts were distributed. 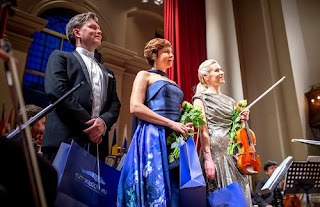 A few post-show party shots (like all the rest, with the exception of the first singer-orchestra-conductor photo, by Jamie Smith). Two Estonians, cellist and agent Maarit Kangron and violinist in the orchestra Marike Kruup, with Jonathan's girlfriend Jess Wadey; 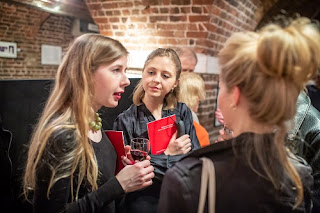 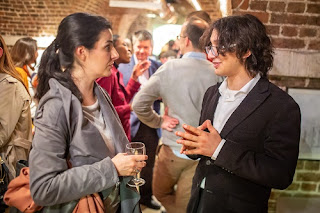 and Jonathan - who was at his happiest this year, having hand-picked all the players he wanted and feeling more relaxed about his relationship to the music - with Eldbjørg, whom I'll see next in Svalbard. 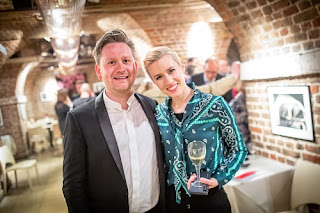 Only sorry I didn't take a photo of my 88-year-old mum, who gamely arranged to be driven up from Banstead and back to attend her first Europe Day Concert, lovingly cared for by her goddaughter Sara while I flitted about. It was, unlike last year which had an elegiac tone, the jolliest of occasions. We're not out yet, the European Commission Representation in London lives to fight another day, and we're feeling more optimistic. Please get out and VOTE for a pro-Remain party today, those of you who can. I'm popping round to the local polling station before I depart for Sweden - alas not, like admirable Greta Thunberg, on the train. Transport around Europe is going to need some serious rethinking over the next year.
Posted by David at 07:24


Thanks David for a glorious account of a memorable event. I went with my husband and we both loved it. The programme was exceptionally well devised and the performances were superb. With the UK position in Europe so uncertain, it is heartening to feel that there are values and ideas embodied by the music that will outlive current problems and continue to bind our communities together. If only politics would follow where music leads.

Thanks, Chris. There will always be a Europe Day Concert in London, whatever happens, and hunger for European ties in culture has grown considerably as a result of this horrible mess. And greetings, Toubab, from the west coast of your homeland. I went up to the main square at 1pm looking for the Climate Protest to pay homage in the Country of Thunberg but no-one was there...Did the rain (lasting until mid-afternoon only) put them off, or did they reschedule?

Love the theme for the evening, and you communicate the joy of it all so well. How nice your Mum was there as well!

She can't stop enthusing about it. Total triumph from that perspective, too.