A full day in North Norfolk 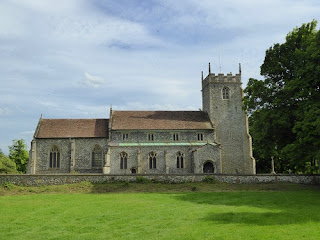 Absolutely no church interiors this time, though we did stop off at All Saints Burnham Thorpe to pay our respects at the graves of friend Jill's parents and brother. As the chosen church to receive money from our annual Norfolk Churches Walk, it got £2725.50 from the four of us and a grand total of £3846. I also won a £50 prize in the annual photographic competition, but as often I thought the choice was an odd one, though not ungrateful, of course.

The destination was Burnham Overy Staithe where our dynamic friend the composer and mezzo Susie Self was giving a special preview of her one-woman opera Analysis (we think it has to be called Self Analysis). The long drive with multiple stop-offs entailed revisiting a few old haunts from the time when Jill's mother lived in Burnham Thorpe. But if anything I love the area around Southrepps, where Jill is now settled  - to be strict, in Lower Southrepps - even more. 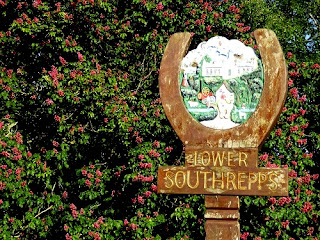 Her garden is now evolving into a little miracle, and with so much insect-friendly planting, it was buzzing and humming with life on a hot June weekend. Quite a few species of bee were to be found on the rockery, especially around the nepeta. My first conscious sighting of orange-bottomed bumble bees (Bombus lapidarius), and plenty of them. 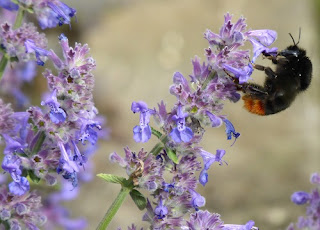 As for the dragonflies, oh my, What colours, what a size! I'm grateful to Ellie Colver of the British Dragonfly Association for identification, having failed in my online search. Alas, these are no rare species, but nature's design is the thing. This one, with its plump blue and yellow thorax, should have been easy to classify, though I didn't find what I wanted: it's a male Broad-bodied Chaser (Libellula depressa). 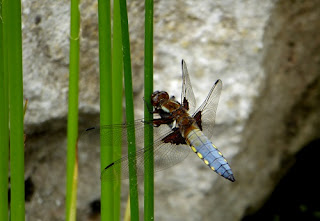 More confusing were the candidates for this beauty out of three or four that had refused to settle, whizzing around the lawn for ages - a Four-spotted Chaser (Libellula quadrimaculata). 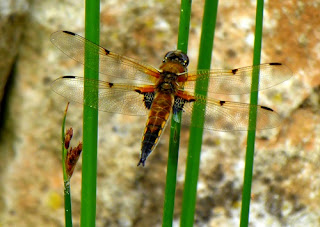 Jill outlaws some colours from her garden scheme, and wouldn't let these giant oriental poppies in, but how splendid they look against a wall on the lane. 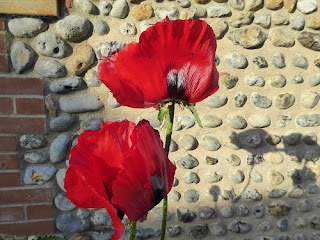 There's a boardwalk around a preserved wild common/marsh five minutes from Jill's house, formerly managed by local residents and now in the care of the Norfolk Wildlife Trust, which will assure the right money spent on preserving it. Always bliss to visit if one has a spare half of an hour, especially in the evening. 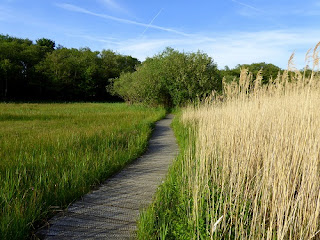 Crossing a shady stream, I came across what I was hoping to see - quite a smattering of wild orchids 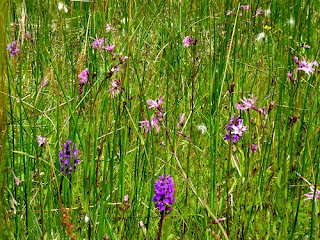 including this one, the Common Spotted Orchid (Dactylorhiza fuchsii). 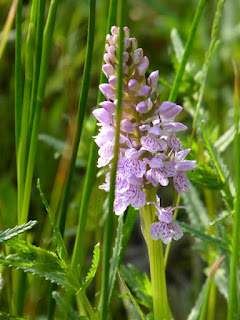 White poplar fluff was drifting everywhere - a sight I remember multiplied a thousandfold from arriving (like Lenin) at St Petersburg's Finland Station one July (it was Stalin's favourite tree, apparently). 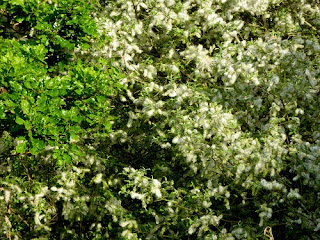 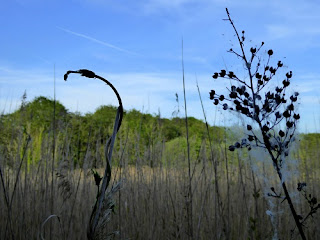 Our leisurely drive west to Susie's show needed to take in one big walk. It had to be a mostly shady one on a hot day, so we elected to do the big loop round Sheringham Park, Repton's role in which I hymned in an earlier blog post. 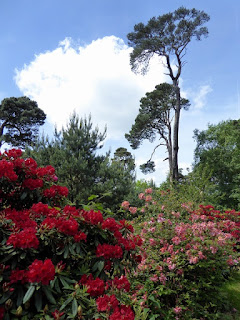 This was full rhododendron time, with occasional glimpses down to the sea. 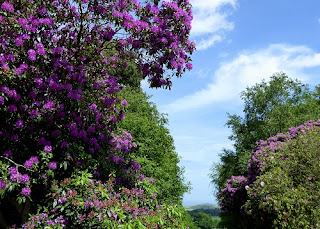 We caught more of it fringing the estate before turning inwards at the point where the steam trains arrive at what is the terminus for the standard route. 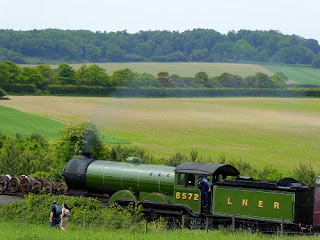 Foxglove flourishing in the woods on the way back. 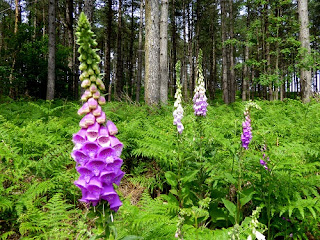 Then it was back in the car to head for lunch at an old favourite, Cookie's Crab Shop at Salthouse, which has become a hotspot since we used to visit in its humble days. The crab and lobster special did not disappoint. Then a short amble to see the salt marshes here. 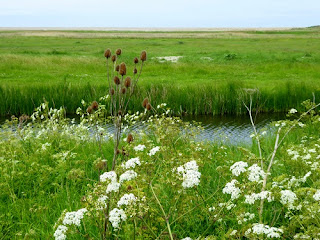 and on to a garden centre in North Creake beloved of Jill, and I can see why: it just seems to have the ones you want. This magnificent cistus was not for sale. 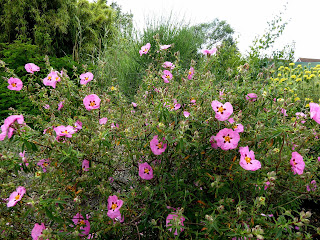 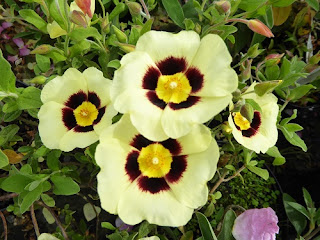 Tea at North Creake Abbey next, also quite developed since we last visited. The fields and stream over the way saw sheep and geese in happy co-existence. 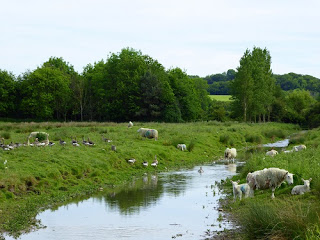 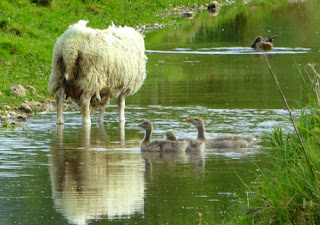 Finally, the bathe at Holkham Beach, though another half-hour walk necessary from Burnham Overy Staithe to get there. 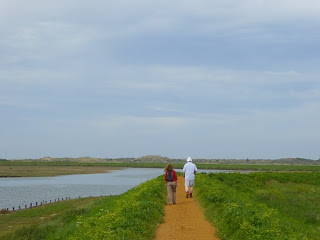 The water wasn't particularly cold, though there are no shots of me in the water, and the one of the other two in the dunes isn't permissible. So here's sea kale in the dip of the dunes on the way back 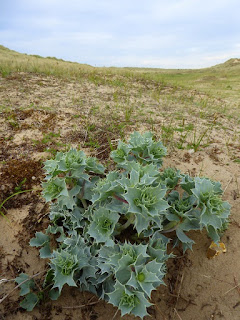 and a fading sun over the marshes. 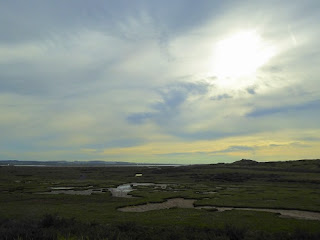 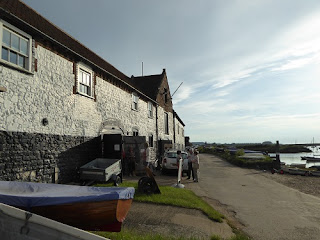 and the singer-composer was in fine form both receiving on her set with its installation - true Renaissance woman, is our Susie - 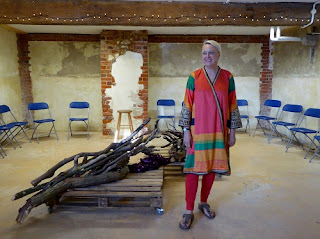 and for the opera itself, a highly varied free-flow musical-theatre piece about the more analysis-worthy phases of her life. She is a fearless entertainer, engaging each member of the audience directly at one point or another, and she uses her voice superbly through many octaves. Michael, the 'sexy Canadian' who took her on a spin around his native land when they were both music students (a lively road-number), was there to support on cello; that's quite a partnership. Here they are after the performance. 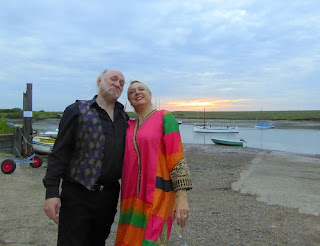 For the after-show, they'd generously prepared a picnic of smoked salmon sandwiches, brownie and apple, following the prosecco at the start. 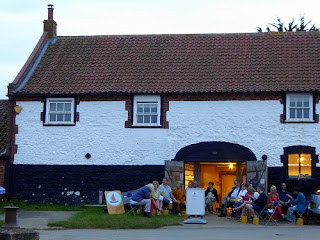 So we sat very contentedly watching a fine sunset. 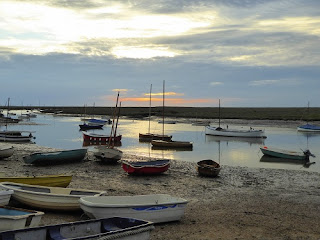 Perfect end to a perfect day, if you'll forgive the cliche; I can't think of a better way to put it. And do make your way to the superlative 10th anniversary Southrepps Music Festival run by top tenor Ben Johnson and pianist Tom Primrose, held mostly in one of Norfolk's tallest-towered churches (simple inside, but excellent acoustics). Events from 7-11 August include recitals by phenomenal guitarist Sean Shibe, Ben in duo with former BBC Young Musician of the Year Martin James Bartlett (now well on the way with his superb EMI debut disc,which I need to write about) and my pals Benjamin Baker and Jonathan Bloxham in Mendelssohn's Second Piano Trio with Daniel Lebhardt (who also gives a duo recital with Ben B). The culminating event is a performance of Britten's The Burning Fiery Furnace. So cue a 'playout' with the burning fiery firnament at Burnham Overy Staithe. 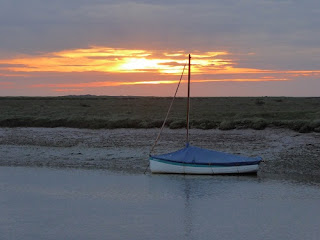 Well, what do you know, some of these places we have actually visited, and we look forward to returning. (J’s brother lives in just outside Sheringham.) Bees do love nepeta—such a rewarding, no-hassle plant. Our way, we this year, for the first time, saw a hummingbird poking among the blooms!

Yes, you can always outdo us with hummingbirds - how I long to see one in the wild. My favourite place in London Zoo when I was a kid was the hummingbird house, where you could walk through, Snowdon Aviary style. Long gone.

If only you could come at the same time as the Southrepps Festival (7-11 August), one of the very best, run by tenor Ben Johnson and featuring Martin James Bartlett, Sean Shibe, my pals Jonathan Bloxham (as cellist this time, not conductor) and Ben Baker. This year they're daring a performance of Britten's The Burning Fiery Furnace in the church.

Makes you feel that despite everything, the world can still be a wonderful place when you have days like that; and beautiful photos as always, David.

Thanks, Charles, and indeed: one can only repeat the words of Kurt Vonnegut's uncle on perfect occasions: 'if this isn't nice, what is?' And Southrepps being long in Lib Dem Norman Lamb's demesne puts the wind in one's sails a bit.