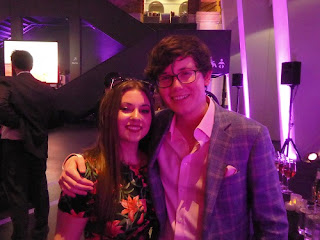 Here, in the pink thanks partly to the lighting, are two pianists from among past winners: Lara Melda (2010's victor, then known as Lara Ömeroğlu) and Martin James Bartlett, 17 when he took first prize along with saxophonist Alexander Bone in 2014. Perhaps the one significant step forward for the BBC Proms this summer is to bring together 21 Young Musicians of the Year (as they were formerly called) in a single concert, marking the event's 40th anniversary. Lara and Martin will be repeating their tour de force, featured first time round with the Aurora Orchestra, as specimens in the 'grand zoological fantasy' of Saint-Saëns' Carnival of the Animals, always a delight. Who'll play the Swan? Sheku Kanneh-Mason or one of the other three cellists represented, including Sheku's mentor Guy Johnston? 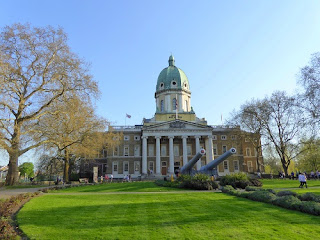 The reception had a special setting this year, after many sweltering gatherings in the Amaryllis Fleming Concert Hall of the Royal College of Music - the Imperial War Museum, looking less grim and Bedlamish than usual on a day of summer-in-spring. My photos of the gathering were taken before and after the great throng, from which you'll gather I lasted the duration. 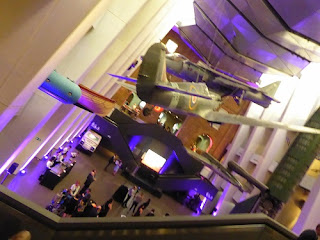 The reason for the location was the Proms' commemorating the centenary of the last year of the First World War. The theme reminded me that my paternal grandfather's reconnaissance mission at the Front took place on 7 April 1918 in Fampoux Field to the east of Athies, 100 years ago this month. As related in the History of the 5th Dragoon Guards published by Blackwood in 1924 in my first entry on Captain George Nice - and it seems apt to repeat it here -

Second Lieutenant Nice of A Squadron was afterwards awarded the Croix de Guerre for his gallantry in reconnoitring under heavy rifle and machine gun fire to try and find a route for the regiment to make a further advance in the direction of Greenland Hill.

1918 was also the year in which Parry completed his richest choral music, the Songs of Farewell. At the launch the BBC Singers gave a very nuanced performance, stilling the party crowd, of 'My soul, there is a country,' the only one of the set I know, from All Saints Banstead days*; I came to marvel at the rest when working on a talk for Tim Reader and his Epiphoni Consort, who sang a selection. Sakari Oramo will conduct the entire set - and I think they do need to be heard in one concert, if not necessarily all together at once - in a Cadogan Hall Prom on 20 August. 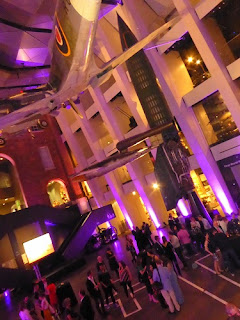 Looking through the Proms prospectus - our usual pleasure in revelation at the pre-event gathering with David Pickard and Alan Davey was pre-empted by the untimely morning announcement of the whole lot - the Cadogan events strike me as much the most enticing in terms of repertoire. There aren't many great surprises in the rest, though DP made the very good point that what looks ordinary on paper can be transfigured by the unpredictable magic of the Albert Hall (conversely, it can let some pieces down). And there will be thousands who've never heard Shostakovich 4 before - it has to be worth it from Nelsons and the Boston Symphony.

To my surprise Bernstein's MASS isn't on the cards, a Proms piece if ever there was one - though I've had my vision to last the next five years. West Side Story (complete in concert for the first time) and On the Town are, under the peerless-in-that-rep baton of John Wilson.

Cue my chat with Martin and Lara (I knew the former a bit from his Southrepps recital and trio performance). MJB's quirky imagination revealed itself when we were chatting about Bernstein, I told him how, courtesy of my then editor at The Guardian Ted Greenfield, I shook the great man's hand at a recording session for Candide before he (MJB) was born, and he said that Lenny was the person he'd most like to have met. But then he thought about it and commented that probably you'd have the man's entire attention for five minutes and he would be charming, and then switch it off. Like Ripley. 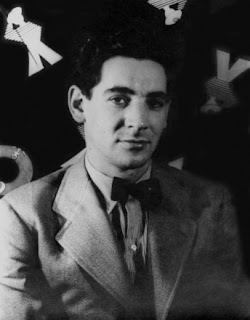 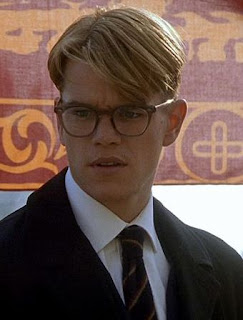 I did a double-take. Yes, Patricia Highsmith's Talented Mr Ripley as immortalised cinematically in Plein Soleil, which MJB hadn't seen, and Minghella's beautifully filmed, scary and poignant masterpiece, which he had (Matt Damon's Ripley pictured above), and we talked about it, and told Lara she had to see it.

Well, it was a grand evening, and though I sometimes dread the thought of chit-chat, there were so many welcome faces, some of whom I asked along to the Europe Day Concert. Several key folk will be involved in that whom I met at the fabulous Pärnu Music Festival, which is a roundabout way for me to close in saying that the orchestra I'm most looking forward to seeing at the Proms, following the usual heavenly (we hope) week, will be the Estonian Festival Orchestra under Paavo Järvi (a chat with David Pickard at the Multi-Story Orchestra Prom last year encouraged that set-up, I'm told). Here the 2016 vintage is on the beach at Pärnu, a typically wonderful shot by the great Kaupo Kikkas. 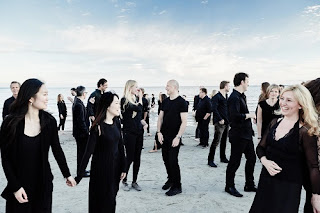 Only connect: they'll be opening with Arvo Pärt's Third Symphony, the UK premiere of which father Neeme conducted with the Gothenburg Symphony Orchestra at the Proms in 1989 - an event which led to my first ever visit to Estonia a few weeks later. Terviseks (Estonian for Cheers!) to all those Järvis!

*RIP Choirmaster DAH/David Harding. I can't say much more except that he was the most inspirational figure in my musical education.

Bernstein's Mass surely his masterpiece? Much underrated, though lately coming into its own. Not just a counter-cultural product of the post-JFK years, though fascinatingly that, but a piece about music, and a sort of protracted argument with the 'message' of Beethoven 9. I suspect it might have been programmed for this year's Proms had it not been done (one of the Jarvis at the helm!) back in 2012. I'm pleased to see John Wilson tackling West Side Story, but think Candide might have been even more telling. (Didn't catch all of this morning's Building a Library on that, but I'm guessing you must know the wonderful DVD of LB conducting it live at the Barbican in 1989? How great to have been able to shake his hand. Really interesting segue to Ripley!)

Yes, John, I really believe so. You're spot on in what you write. I wonder if it would have taken the form it did without the influence of Britten's War Requiem (ie an antagonistic approach to the Latin mass, and a kind of reconciliation at the end); I'm coming to think it's on the same level.

Heard it twice live now under Marin Alsop - not the greatest of conductors across the board, but a real motivator and force for the good. The huge diversity of the 500 performers - Chineke! junior orchestra playing alongside member of the National Youth Orchestra, for starters - meant a diverse audience, too, which went crazy for it. Some folk still don't get it - they think it's dated; but the message is eternal, and you can take your pick from Bernstein's dizzying eclecticism. Personally I think it all works.

Didn't know about the Bernstein DVD - I actually looked it up, thinking it had to be seen as well as heard, and only found one from Vienna. I only have the 1972 Bernstein on CD.

Five years is a good time to wait before hearing/doing such a masterpiece again. And it's the perfect Albert Hall piece. Anyway, I've had my fix this year.

MJB is so amusing - you see the esprit in his playing. I love what I heard him do at Southrepps, chiefly Mendelssohn Piano Trio No. 1 and springy Haydn and Beethoven. Youthful zest is his keynote - it doesn't work for everything, but it's such a precious gift.

I'm rather intrigued by the BBC Young Musician Prom, which looks like a real risk-of-a-programme; how easily it might have been "let's get the winners to play their winning concerto".

But given the numbers, Andrew, that was never an option. The Carnival of the Animals should be quite a command performance (though looking at the programme I see it says 'excerpts' - that's a shame). Anyway, at least it's intriguing, which is more than can be said for most of the orchestral programmes, even if there are some fine visitors.

I heard Candide conducted by Bernstein ( at that point it was said that it was the only time he had conducted the piece, which I could hardly believe). And I observed that it was possible to hold his attention for longer that 5 minutes, if one was musical, young and good looking

Sorry David: meant the 1989 Candide, done at the time LB recorded it for DG (and you encountered him). I've collected most of the available recordings of Mass (funnily enough Bernstein's own on Sony has eluded me: worth getting?), and of these the Alsop/Baltimore on Naxos I think by some distance the best. The wonderfully named Jubilant Sykes as the Celebrant has to be heard to be believed. Total inhabiting of the part, and what a voice.

Well, David, I was young-ish in 1989 and I don't know if it was of any significance, but when Ted introduced us he grasped my hand and didn't relinquish it as he walked towards the Gents...

I think that MASS is excellent, John, yes - the young Alan Titus was/is the Celebrant. And that lovely, poignant arietta 'Thank you!' is beautifully sung. Might get hold of the Alsop recording for Jubilant Sykes - what a massive and difficult part it is. Must listen to Ed Seckerson's Building a Library.

May depend on your view about the kind of voice suitable for the Celebrant, David! These days I'm sure you could quite easily find samples. Oh, and yes, meant to say: I completely agree with you about the influence the War Requiem must have had on Mass. To some extent Peter Grimes too, with the 'mad scene'. I'm sure I remember LB being said to be about to record a complete Peter Grimes for DG in 1991 or thereabouts...

Yes, Grimes's fragmentary utterances are definitely behind the 'fraction'. Given how much the Celebrant has to sing in a croon-y falsetto, I wonder if it wouldn't have been better to give it to a tenor rather than a baritone. But Bernstein's vocal lines generally aren't that singer-friendly - a tad on the Beethoven side.

Naughtily to flip the coin: Peter Pears for that Decca recording Britten (never) made with the LSO in 1973?

D'you mean of MASS? Can you imagine Ben and Peter trying to get hip? The mind boggles.

This is a very funny, not to mention trenchant, observation: "But then he thought about it and commented that probably you'd have the man's entire attention for five minutes and he would be charming, and then switch it off."

MJB is a very amusing chap - I may not even have paraphrased him entirely correctly. If anything he was funnier. I hope you get to hear him play in NY ere long. The wit is very apparent in the playing (where appropriate).