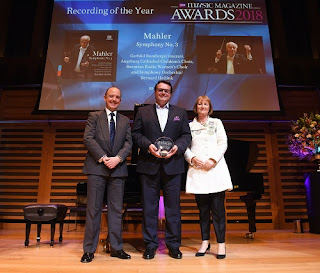 Semyon Bychkov's Vienna Philharmonic recording of Franz Schmidt's Second Symphony was the one I hoped the public would choose from our choice of three orchestral discs, if only to encourage record companies to take risks in big orchestral repertoire; and then either that or Sean Shibe's English guitar music CD, most persuasive playing I've ever heard on that instrument, as CD of the Year. But I'm still very pleased that Haitink's fourth Mahler Three on disc with the gorgeous-toned Bavarian Radio Symphony Orchestra was the ultimate choice - especially since news about it just preceded my visit to Lucerne to hear the 89-year-old BH - nb not 'Sir Bernard' nor 'Maestro Haitink', he rejects both - giving his eighth year of conducting masterclasses. 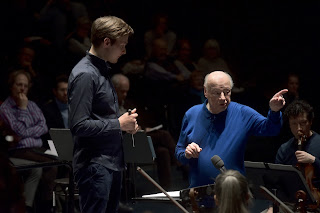 I was only able to attend the last of three six-hour days, but I still count it as one of the key experiences of my life to set alongside Abbado's Mahler in Lucerne, and I try to get to grips with it on The Arts Desk. Above: Haitink with perhaps the most assured of the eight young conductors on the course, Vitali Alekseenok, photographed (like Jansons below) by Peter Fischli. 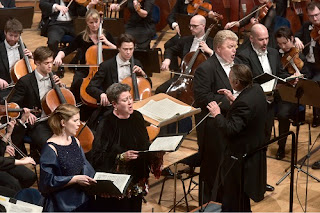 That has enriched the piece I've written on Haitink to coincide with the Awards issue of BBCMM due out shortly. So, too, did the fact that I also caught the Bavarians in Lucerne with Mariss  Jansons, and talked to the young Swiss co-principal cellist of the orchestra, Lionel Cottet, about the Haitink Mahler 3 just before the performance (there he is among the players on the left in the ensuing Beethoven Mass in C, a first for me in concert, and it flowed beautifully with a fine choir and four excellent soloists). I also spent 15 engaging minutes on the phone with leader/concertmaster Radoslaw Szulc, and wasn't able to use as much of what he told me in the short final piece as I'd have liked - his eulogy, for instance, to Martin Engerer, superlative soloist in the Hummel Trumpet Concerto at the first of the two Lucerne concerts - pictured with Jansons below - and the one-of-a-kind posthorn he used (not a flugelhorn) in the Mahler. 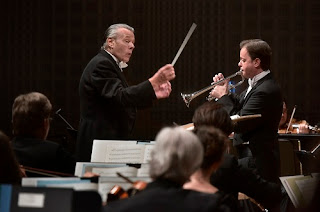 Must say that though only one of my personal favourites won its chosen category - Bram van Sambeek's Aho and Fagerlund works for bassoon and orchestra (van Sambeek's little film with phrases of the Fagerlund was a delight, while legendary Robert von Bahr of BIS was on hand to praise the Lahti Symphony Orchestra) - I was delighted with very nearly all the choices. Of the trophy-receivers below, Bertrand Chamayou, pictured in the front below (all Awards ceremony photos by Johnny Millar), 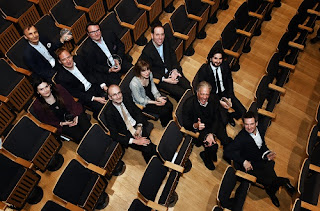 gave a live performance of Debussy's 'Clair de Lune, Fenella Humphreys chose an odd pair of pieces and most promising newcomer Julien Brocal played some of Mompou's variations on Chopin's A major Prelude. Can't say they sounded to me like much more than slightly ungainly improvisations on a piece whose charm is its simplicity, but I do love the disc, pushing for it wholeheartedly at the jury session, and I had a fascinating conversation with Julien after the ceremony. 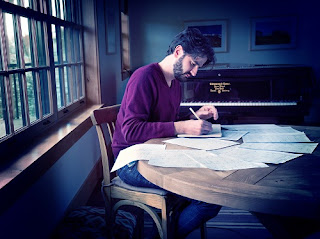 Like the best of his generation (he's just turned 30), he is supportive of his colleagues, speaking very enthusiastically about Roman Rabinovich when I told him of hearing RR play three historic keyboards at Hatchlands, and a very thoughtful as well as friendly fellow. His brand new disc of Ravel and rather more enigmatic Mompou offers a rainbow of pianistic colours and subtleties.

The ceremony at my favourite London venue, Kings Place, was a model of its kind, just the right length. BBCMM Editor Olly Condy set it up engagingly, and regular James Naughtie emanated wry naturalness as usual. There were essential speeches from Lionel Meunier of Vox Luminis, winning the Best Choral award for the beautifully-presented Luther tribute, and the witty-in-English manager of the Bavarian RSO Nikolaus Pont. Nicholas Daniel and Harriet Harman - pictured up top with Olly and BR Klassik co-founder Stefan Piendl - made a special plea for music education in the UK (watch this space). Non-irritant good humour came from Anneke Rice and Vikki Stone, pictured below with Olly and Chamayou. 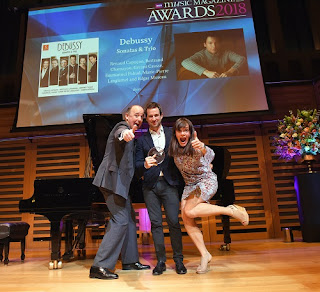 It become apparent that we seemed to favour Frenchmen, something we certainly weren't aware of at the time of the judging, but they all deserved their success, and if the whole thing has the intended effect of encouraging the classical recording industry to carry on its chosen path of the rich and rare, of doing what seems artistically worthwhile at whatever cost rather than simply trying to make money (nice if that happens too), then it's done its bit.
Posted by David at 09:11

David sadly blogspot does not include a Like button that allows me to simply say I've been here and as always enjoyed reading you. Fondest regards to all in your corner of the universe.

Words are always nicer than a 'like'. Thanks, Will, as always, and likewise to you four.

It’s terrific that the grand old man Haitink got his due in the awards. I loved your description on TAD of his master class with young conductors—any chance the whole of it was recorded? He seemed, from your description, to be that rare combination of generous, insightful, and kind. Interesting the lean toward the French this year in the awards—as an aside, I’ve found, in these last few months, I’ve been particularly drawn to French music (often piano music of Poulenc, Tailleferre, Debussy, Ravel). Perhaps, who knows, there is something in the atmosphere!

Footnote re Haitink: I was trying to remember what he conducted the one time I've been lucky enough to hear him conduct live. Fortunately, I made a record of it, and here's what it was, in 2013:

Seeing and hearing Haitink conduct and the LSO perform Shostakovich’s Fourth and Fifteenth Symphonies was revelatory. Haitink and the LSO clearly care about and understand these symphonies deeply, and it showed. Some audience members found the Fourth Symphony (performed in the first of two concerts), particularly disconcerting, if measured by the cough-o-meter readings throughout. Thankfully, it seemed those who might have been disconcerted by the Fifteenth Symphony left the second concert early. We who remained were enthralled. At the end, that sublime morendo, Haitink did not immediately drop his hand. The audience heeded him, and there was silence, precious silence, before the applause.

I often thought of Haitink as the supremely cultured musician for whom what Colin Davis rather sweepingly called 'circus music' (ie the 20th century Russians) might have been a stretch too far. But of course he came at it from Mahler, and he always saw the bigger picture. His recording of the Fifteenth still remains my favourite, not least because the sound is so superb for the whirrings and clickings at the end. Must try his Fourth for size too.

On NY audiences (assuming that's where you saw BH and the LPO) and Shostakovich, I must have mentioned Mark Wigglesworth telling me about the massive walk-out during his performance of Shostakovich 14. Yelena Prokina and Sergei Leiferkus were so disheartened that before the second performance he made a little speech before the performance telling the audience what to expect. At the word 'long' he swears he saw the audience all look at their watches. There's always a social engagement to go on to after a concert in NY.

Sadly I don't think the Haitink sessions were recorded. A film crew was present at the last session, and put together a little film, but sadly that was when he said least and let the young conductors just conduct. He was indeed everything you say, and I've been looking at conductors in a new light since - knowing that Rafael Payare would have come in for some strict advice, hearing in my transcription of Robin Ticciati's interview, especially his close collaboration with the Scottish Chamber Orchestra players, everything Haitink advised about trusting the orchestra's experience.

Your observation that Haitink comes at Shostakovich from the bigger picture of Mahler makes such a lot of sense. While I wish I had a better musical memory of live performances, I do recall thinking at the time that Haitink had a grasp of the 15th that would be hard to best.

Talking about Haitink's Bavarian Radio Symphony Orchestra Mahler Three, the orchestra's then leader, Radoslaw Szulc, talked about 'Fernhoren' - the ability to grasp everything from a great height. He always seems to have been like that. There's more in the article to mark the disc's award of BBC Music Magazine Recording of the Year in the issue just out.

An entirely inconsequential addition to the BH/Shostakovich thread, but there's a wickedly funny (as I remember it) Julian Barnes short story - 'Vigilance' (in The Lemon Table) - about a rather uptight RFH-goer at an LPO concert conducted by BH with Mozart's 25th Piano Concerto and Shostakovich 4. Audience coughing is the issue!

Right, I'll get hold of that. Haven't yet dared to read JB's Shostakovich book but them wot know say it's good. Interesting chat last night with Martin James Bartlett at the Proms launch - BBC Young Musicians are figuring in a big get-together, one of the few novel ideas this year - about his working with Haitink on a Mozart piano concerto. Interesting is all I'll say...

Yes, David, and now that I remember (also corrected my memory: it's Mozart's 27th not 25th) there's a also a story in that collection where the protagonist is obviously supposed to be the elderly Sibelius. Barnes writes well on music, it seems to me, though it's always very hard to write about the nature of inspiration - which may be why a short story about a composer who's largely given up composing isn't a bad idea! I enjoyed The Noise of Time, though again I think it's stronger on the historical circumstances than on creativity or verifiable 'fact' about inner lives - possibly again why Shostakovich is evoked rather than explicitly identified. But some subtle touches - I love how it begins and ends with a very Shostakovichian touch, a legless beggar on a station platform. Not just Mahler there but Mussorgsky too - surely a cameo from the holy fool in DS's beloved Boris Godunov...?

The more we can get from Haitink these days the better, I say, given that he doesn't rush into things for the sake of it. I loved that Mahler 3 from Munich, and the recently issued Bruckner 6 was great too. Mozart piano concertos, hmmm?

Shall we just say that when you're that great age working with soloists who have pronounced ideas of their own, other than those who've known you for decades, isn't so easy. Be sure to book, if you can - are you 'John in the Lot' rather than John Graham, or another? - for BH's 90th birthday concerts with the LSO next March. He has no official plans beyond those and a concert or two with the Chamber Orchestra of Europe.

Touches of Klemperer conducting Barenboim in the Beethoven concertos, maybe? I'm sure orchestras won't let BH off the hook that lightly if, as we all very much hope, he's still able to commit.

I believe, though it's not official, that he has decided on a cut-off point. But there will still be informal engagements. Anyway, a year is a long time when you're 89, so let's hope all goes well.