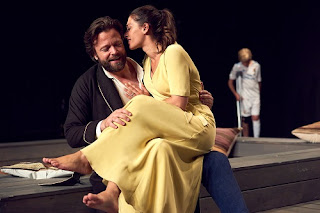 From unforgettable productions of Peer Gynt and Hamlet in Oslo, I know that Norwegian acting is up there with the best. The sing-songy language, too, makes it musical even when you don't grasp the sense. In Oslo, I mostly took only the general sense; in London, for the visit of the National Theatre of Norway with Ibsen's Little Eyolf, surtitles elegantly projected on the variegated back wall of Notting Hill's Coronet where the enterprising Print Room has its home kept the sense painful and focused.

Everything that wasn't clear or powerful in Richard Eyre's half-cock Little Eyolf at the Almeida - salvaged by a fine performance from Lydia Leonard - strikes with the force of Kafka's axe through the ice in this production by Sofia Jupither. First, it was a true ensemble, down to the soft-spoken creepiness of the Rat Wife (Andrine Sæther) who seems to serve around the Norwegian fjords and island as a Pied Piper to children as well as rodents. The contemporary setting only made her the more effective, cigarette in hand, air of an old hippy, seemingly harmless (you'd invite her in, but you might regret it). Young Eyolf (Sebastian Sørlie Lamb) wanting to be sporty, holding the unrealistic hope of being a footballer: an Emirates t-shirt, why not? 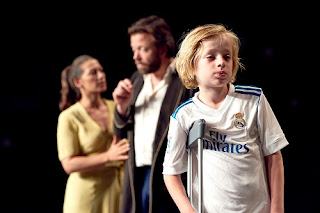 The four main performances were pitch-perfect. The most difficult and rewarding role is that of Rita, who wants husband Alfred all to herself still, 10 years into their marriage. Pia Tjelta transformed from a scornful, jealous, febrile clinger - powerful low tones you rarely get from a leading actor, though I've heard them from Janet McTeer and Hattie Morahan, coincidentally two excellent Noras - into a stricken mourner, a broken reed whose big idea in the last act consequently came over as plausible and moving (notice I'm resisting plot details, because the play can still shock those like J who don't know what's coming). 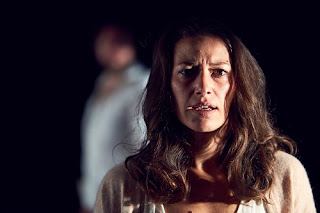 Lacerating grief isn't easy to portray convincingly on stage, but Kåre Conradi, the Alfred, made it believable too. Silences were charged, explosions always startling. No music, only soundscapes, within the acts; but it was fine that the passing of time between the tragedy of the first act and the response in changed weather 24-plus hours later should be served by chamber scoring (no sound credits given). 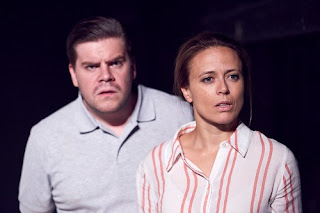 Equally good was the chemistry between Ine Jansen as the other Allmers, 'sister' Asta also known to the young Alfred as 'Little Eyolf', and John Emil Jørgensrud's honest roadmaker Borgheim. Their last scene together reduced me to tears, which didn't really stop until the faint hopefulness of the ending. The final wonder was how absolutely timeless Ibsen's devastating psychology remains; his characters may sometimes utter platitudes, but that's usually when they're trying to convince themselves of something they don't really believe in. And the theme of selfishness versus responsibility in public action is also very, very potent. More of this at the Print Room, please.
Posted by David at 12:22

How wonderful that surtitles were provided, though, as you describe, and as the photographs convey, a great deal could be gleaned about the power of this production even absent understanding the language.

Indeed - I need to find out whose was the translation: not the Michael Meyer, I think; it was very brutal in its concreteness at times. You see the strong faces, I think, and get some sense of the transformation in Pia Tjelta's Rita. You would appreciate the careful use of music (only between scenes, as sustained action unfolded which involved minimal set changes).