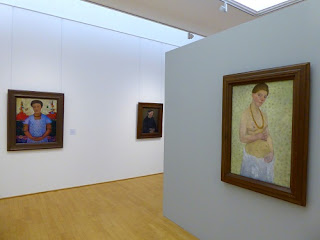 To the world that knows her - and it's not nearly large enough - she is Paula Modersohn-Becker, born in 1876, died untimely in 1907 shortly after the difficult birth of her second daughter. In February of the previous year she did what, thanks to Ibsen, we call 'a Nora' and left her husband, Otto Modersohn, also an artist but a much more conventional one, for a far from secure life in the Paris she already knew and loved. She wrote to him from there on 9 April 1906:

How much I have loved you...I cannot come to you now, I can't do it. I don't want to meet you anywhere else, either. There is much that was yours, that was a part of me that has now left me. I have to wait and see whether it returns, or something else takes its place. 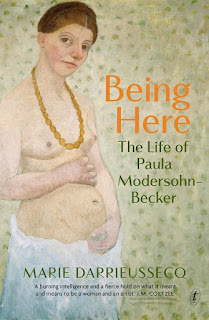 According to Marie Darrieussecq in one of the most simply poetic and elusive biographies I know, she didn't know how to sign off to the old friend whose help she needed, Rainer Maria Rilke:

I'm not Modersohn and I'm not Paula Becker anymore either.
I am
Me,
And I hope to become Me more and more.

How much of that 'more' we should have known, had she not slept with her husband while he came on a mission to Paris to win her back; he seems to have succeeded, for she wrote to her best friend Clara Westhoff, briefly Rilke's wife, as she was leaving, 'The main thing now is peace and quiet for my work, and I have that most of the time when I am at Otto Modersohn's side'. She conceived a second time, with fatal consequences - as Darrieussecq notes with horror, 'to die at thirty-one with her work still ahead, and an eighteen-day-old baby'. Darrieussecq tells us she was led to PMB by this image, the first totally 'real' one she'd seen of a breastfeeding mother. 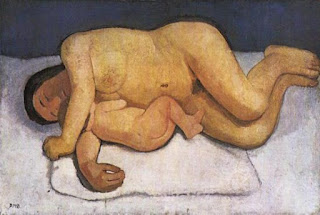 The artist's last word as she fell to the ground, apparently, was 'Schade' - 'a pity'. 'I have written this little biography,' writes Darrieussecq

because of this final word. Because it was a pity. Because I miss this woman I never knew. Because I would have liked her to live. I want to show her paintings, speak about her life. I want to bring her being-there [the motto taken from the seventh of Rilke's Duino Elegies, 'Hiersein ist herrlich', 'Being here is marvellous'], splendour.

Nevertheless we have an amazing output from 1900 to 1907, mostly self-portraits and scenes from the lives PMB knew. She painted birch trees and locals in the artistic community of Worpswede where she lived with her husband 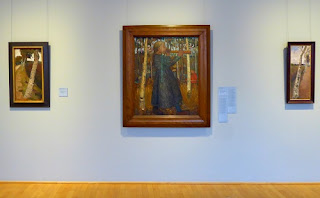 and some consummate still lifes. 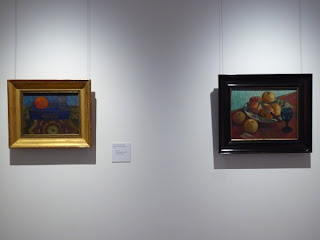 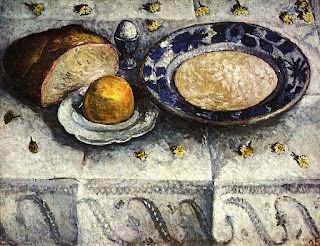 Her place in history as well as art (more important, of course) is assured by the fact that she was the first woman, that we know of at least, to paint herself naked and pregnant (at a time, curiously, when she was not in fact expectant). Fortunately that groundbreaker also happens to be a remarkable work of art, illustrated on the cover of Darrieussecq's book, and having pride of place in the splendid museum where I picked up Penny Hueston's English translation to read on the plane back from Bremen. The context was a magical trip with the 150th anniversary performance of Brahms's Ein Deutsches Requiem from Paavo Järvi, the Deutsche Kammerphilharmonie Bremen and the Latvian State Choir as centrepiece. More about that on The Arts Desk tomorrow. 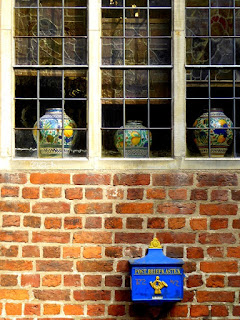 The Museum is part of an amazing complex assembled by Ludwig Roselius, pioneer of decaffeinated coffee (Kaffee HAG is still a name, of course). Having purchased a fine old Dutch-style renaissance house in  Böttcherstraße, a narrow street leading south just off the overwhelmingly beautiful main square in Bremen, 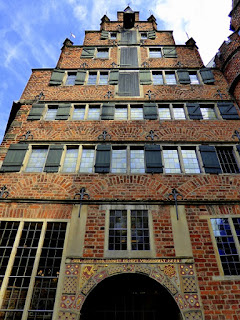 between 1922 and 1931 he enlisted Bernard Hoetger as artistic supervisor to restore the decaying 'street of coopers', nearly derelict since the relocation of Bremen's harbour (to Bremerhaven at the mouth of the River Weser, also to fall out of use in time). The right side of the street as you walk down from the Marktplatz towards the Weser remains in traditional style; the left uses the same brick, but in an independent version of Expressionism. What most guides don't tell you is that Hoetger's bold relief above the entrance, showing St Michael slaying the dragon, 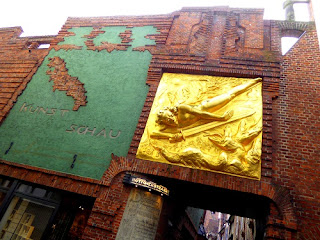 was supposed to celebrate 'the victory of our Führer over the powers of darkness'. Both Hoetger and Roselius were ardent would-be Nazis, kept outside the party because of their support of 'Degenerate Art'. Modersohn-Becker never lived to experience the horror, but she had the highest compliment paid to her work by Hitler's rabble when two of her works were displayed in the Entartete Kunst exhibition and described in terms of which she would have been proud, or which she would have laughed to scorn:

Her vision is so lacking in femininity and so vulgar...Her work is an insult to German women and to our farming culture...Where is the sensitivity, the essence of the feminine-maternal spirit?...A revolting mixture of colours, of idiotic figures signifying farmers, of sick children, degenerates, the dregs of humanity. 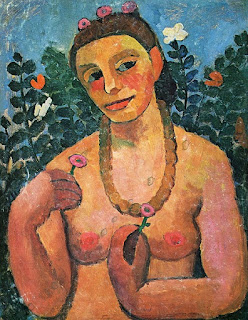 Conventional Otto didn't think much more of her work in the early 1900s: 'The expression! Hands like spoons, noses like cobs, mouths like wounds, faces like cretins. She lays it on too thick...A great gift for colour - but unpainterly and harsh'. Hoetger dishonoured her after death in Worpswede with what Darrieussecq calls a 'horrible' monument, the overwrought, pious opposite of what she herself had imagined (a black wooden tablet with her name, no dates, around it a trellis of roses, in front of it two juniper trees). Rilke, whose lover she (uniquely) never was, yet who clearly loved her, and whom she painted, 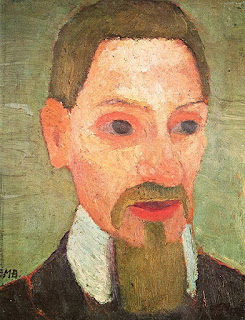 memorialised her in his 'Requiem', but does not name her for posterity. Yet there is the Paula Modersohn-Becker Museum, the first ever dedicated to a woman artist, a house of irregular shapes and fascination without and within 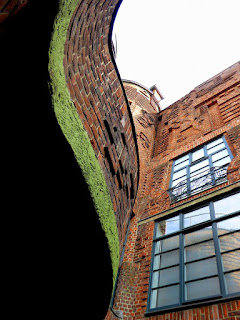 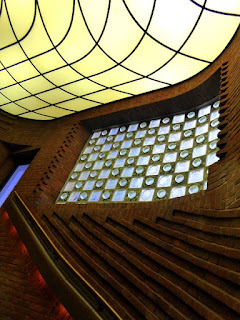 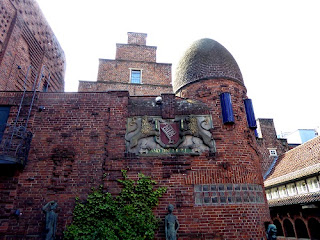 which by contrast is a shrine to Medieval and Renaissance art, 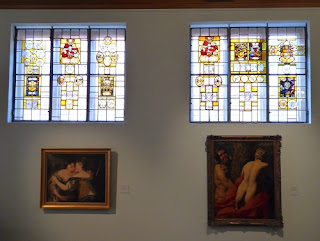 not without modernist touches in its skylights 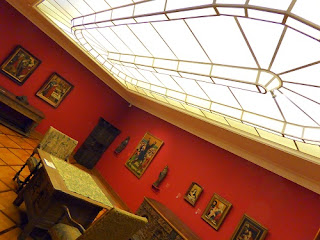 but otherwise a world apart. Its finest nook is perhaps the Gothic quasi-chapel 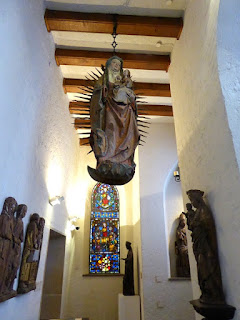 at the other end of which is a superb Pietà by Tilman Riemenschneider. 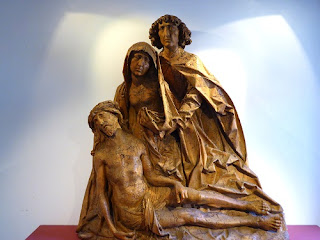 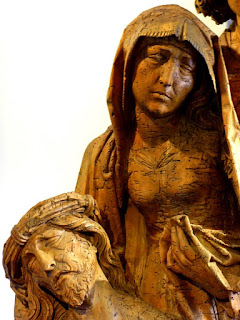 The Nazis destroyed 70 of Modersohn-Becker's paintings; but still the street was listed as an architectural monument on 7 May 1937, albeit as an 'example of the degenerate art of the Weimar Period'. Bombed in 1944 - 60 per cent of Dresden was destroyed in raids - its buildings were restored to something like their original appearance by 1954, thanks to the ongoing fortunes of Kaffee HAG. Sparkasse Bremen bought the street in 1989 and undertook another major restoration, completed a decade later. 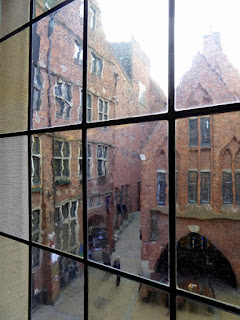 There are fine new adornments, like Jenny Holzer's LED-installation homage For Paula Modersohn-Becker in the splendid staircase. 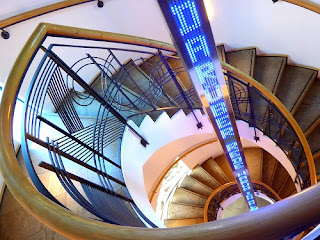 And, whatever its vicissitudes, I can't think of a more beautiful gallery for 20th century art. There was also an impressive temporary exhibition rediscovering the works of Josef Scharl (1896-1954), Between Two Worlds - Munich and New York, Expressionism and Neue Sachlichkeit. 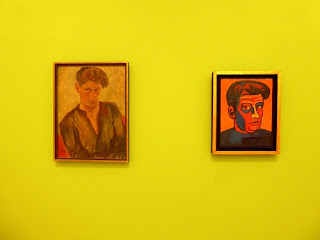 Historically the most fascinating of his large-scale works is Blind Beggar in a Cafe. Among the cafe habitues are Lenin and Stresemann; the beggars include the faces of Scharl himself, Van Gogh and Gauguin, being sent out by a waiter who's clearly intended to be Hitler himself, well known in Munich at the time the picture was painted. 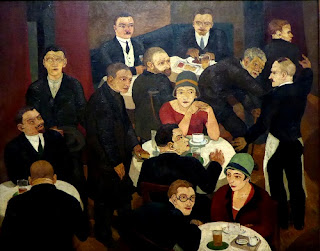 Scharl represented his disgust at the events of 1933 obliquely with an apocalyptic painting of Burning Stars, the battered body of Pietà, 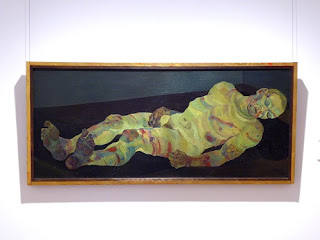 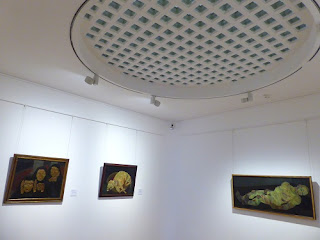 Having refused to join the Nazi Party, he left Germany for America in 1938. The works of the later years have integrity, but not the same urgency. At least in this exhibition partial amends are made for Roselius's complicity; but the great survivor remains 'Paula'.
Posted by David at 23:49

What a magnificent find! The still life you show puts in mind Cezanne. What a terrible shame that her life was cut short.

Perceptive of you. On 19 October 1907, not long before her second child's birth and her death, Paula wrote to her best friend Clara, who married Rilke with unhappy results, 'My mind has been much occupied these days by thoughts of Cézanne, of how he is one of the three or four powerful artists who affected me like a thunderstorm, like some great event. Do you still remember what we saw at Vollard's in 1900? And then, during the final days of my last stay in Paris, those truly astonishing early paintings of his at the Galerie Pellerin.' And to her mother four days later: 'I would so love to go to Paris for a week. Fifty-five Cézanne are being exhibited there now!'

Coincidentally, she also painted a still life with goldfish some time before Matisse's better-known treatment.

Interesting! As is the Matisse-goldfish connection. So glad she and her work have been rediscovered, and thanks to you for bringing the news.

I warmly recommend the Marie Darrieussecq quasi-biography. Short, clear and poignant, keeping an air of mystery about a subject the writer absolutely adores.

Poignant and beautiful. A compliment to be called 'degenerate' by the Nazis. Such wonderful photos, David.

Pamela, I know you'd find the book as engrossing and singular as the paintings.

What a marvellous artist! I’m ashamed to say I’d never heard of her, as hadn’t other members of my sculpture group to whom I showed her paintings. I would love to go and see her work. And she died so very young. A real tragedy...what would she have gone on to do?

Thank you so much foe drawing my attention to her.

If an artist of your calibre thinks highly of her too, Deborah, then I must be on the right track. She seems to have been very prolific in what turned out to be her high noon and sunset rolled into one, but I love what she limited herself to painting, if 'limited' is at all the right word.