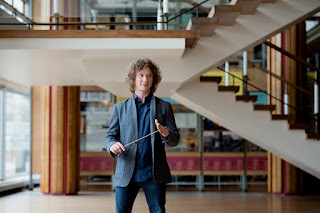 I get no medal for having predicted, in my Arts Desk review of Santtu-Matias Rouvali's December 2018 Strauss concert, that either he or Jakub Hrůša would be appointed to succeed Esa-Pekka Salonen as the Philharmonia's Principal Conductor in 2021. Hrůša is the more experienced of the two, and a deep thinker open to ideas in interview - one of the most memorable I've ever had the pleasure to be granted - but apparently the players found him 'too demanding'. So they've gone for the wow factor and the mad hair (straight as a dye in a photo I found of SMR in his student days). All recent images here by Camilla Greenwell for the Philharmonia.

Two further performances in just over a week gave me a chance to discover further what makes Rouvali tick (in interview, he's surprisingly nervy and a bit evasive, or that may be a language thing). Biggest asset: he shows that natural sense of freedom/rubato and the ability to quicken or slow the pulse in an instant. Abbado, Haitink, the Järvis, Mirga Gražinytė-Tyla and Yannick Nézet-Séguin all have it; Rattle and Salonen don't. 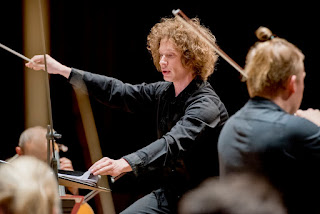 The interpretation I heard of my favourite Strauss tone poem, the Symphonia Domestica (alongide Don Quixote, which I know is objectively the finest), launching Gothenburg's fabulous Point Music Festival was mostly miraculous. All the better, too, for coming from that most refined of symphony orchestras - stringwise, to my mind, up there with Berlin, Amsterdam and Vienna - in a hall which really allows big sounds to breathe and not attack you like an angry rice pudding (as my nearest and dearest once said of an Ashkenazy Alpine Symphony in the Royal Festival Hall).

As I've already stated in my Arts Desk roundup, Rouvali's genius was at its brightest in the difficult ebb and flow of the huge slow movement. And then, as the crazy family-reunion grand finale should goes up a notch in fruitcakiness to sehr lebhaft (crotchet = 116), Rouvali kept it steady. No wonder people were criticising the work itself for going on too long. The parody of the Beethovenesque not-knowing-when-to-stop can only succeed if it's wild. Yes, the horns got their insane whoops right, but that's not the point. A fall at the last hurdle. 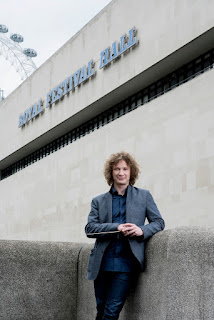 The following Thursday, the Philharmonia were using his latest concert here to celebrate the appointment (didn't hang around much at the Ballroom 'welcome', too many platitudes being spouted). It began sensationally, with a deliciously layered account of Adams' perfect curtain-raiser The Chairman Dances. Pekka Kuusisto seemed a bit too muted - not literally - for the overloud brass in the opening movement of Stravinsky's Violin Concerto, and saved heartfelt expression for the beautiful homage to Bach which proves the work has soul. 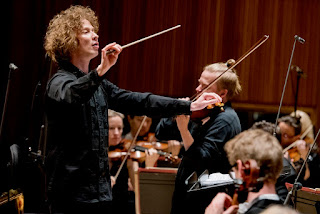 Petrushka was bound to be a brilliant showcase for Rouvali's sense of refined colour, as the Musorgsky/Ravel Pictures at an Exhibition had been in an earlier Philharmonia spectacular. He favoured tone-painting and conductor's tricks over storytelling, which was fine on its own terms. All solos were flawless and characterful; the trumpeters were going great guns. Then, after the Rite-ish onrush of the Masqueraders - swelling trill; finish. The concert ending, which I'm sure Stravinsky must only ever have intended for performance of the orchestral 'three pieces'. No pathetic death, no ghost on the roof. 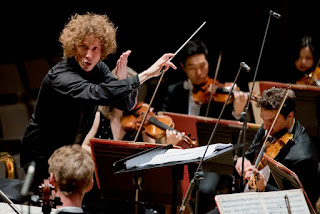 This shock happened to me only once before, in a BBCSO/Bělohlávek Prom for which I'd prepared the nine-year-old son of a friend I took as guest. I was aghast then that he didn't get the full story, and I went into a spin here. What kind of musician does that? Surely only one without theatrical instinct. Rouvali partly redeemed himself with a virtuoso performance on the 'bones' with Monti's Csardas (accompanied by the wonderful Liz Burley, superb in 'Petrushka's room'). But I'd much rather have had the last five or so minutes of the ballet. My Arts Desk colleague Bernard Hughes hit the nail on the head (which means I totally agree with him). 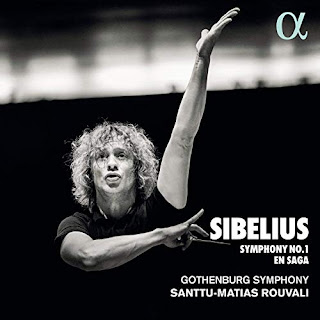 Redemption, then, on his SMR's first recording with the GSO, which I finally listened to. Hair standing on end from the first string tremolos of the young(ish) Sibelius's first movement onwards. A magnificent performance from start to finish. Let's hope for more like this, and no deflationary endings. Which reminds me that there won't be anything deflationary about the greatest living conductor, Bernard Haitink (pictured below at the Barbican in March by Mark Allan), bowing out in September. 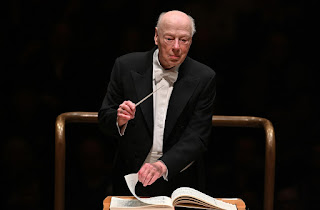 He's decided that a Lucerne appearance will be his last, having celebrated his 90th birthday with the LSO in style. Wise self-knowledge to the end (of his professional career, that is; may he enjoy as many more years as he wants feeding his endless curiosity). I'll never forget his totally inspirational masterclasses in Lucerne, his Bruckner 4 or Beethoven 6, among the most recent performances, and so much else going further back.  Don't miss the Vienna Philharmonic Prom on 3 September; queue for an Arena place (£6) from noon if necessary. I did just that for Bernstein and the same orchestra in Mahler Five, and that's a concert which likewise I'll remember as long as I live.
Posted by David at 18:46

Really interested to hear of your esteem for the Symphonia Domestica, David - which is not a preface to saying that I disagree! I don't know it: I guess a casualty of that vague sense of disdain which seems to float around about the piece. Any tips for listening (beyond those above), and a 'best' recording? (Sorry, trying to get you in your critic's hat on the cheap!)

Not at all, JohnG, I'd rather be what Charles Mackerras called me, 'a publicist for music' (incidentally, my first Prom as a Prommer - I'd been taken to James Loughran's Viennese Nights with the Halle as a kid - was CM conducting Domestica, and Zoltan Kocsis in Bartok's First Piano Concerto. I promptly bought the Karajan LP of Domestica that week).

What I especially love about Domestica are its infinite symphonic metamorphoses. He lays out all the themes at the start, as if for variation treatment, then composes a scherzo worthy of Mahler 4, a vast slow movement, an incredible double fugue and a deliberately OTT finale. When I did a BBC Radio 3 Building a Library on it, I chose Neeme Järvi and the Scottish National Orchestra, chiefly because the end is SO wild. Now I might go for Marek Janowski and the Berlin Radio Symphony ORchestra on Pentatone, which has a revelatory coupling in Die Tageszeiten for male chorus and orchestra, four Eichendorff settings: wonderful piece (who knew before?)

Brilliant. Many thanks, David. I shall investigate without further delay!

Another side remark ( O dear here's Damant again.....well, I do not know enough about the musical universe) but your remark about platitudes brings to mind my rule ....."Everything that I have to say has already crossed your mind"

I listened to the Janowski recording again after our exchange and was even more impressed than first time round (which led to its being nominated as a BBC Music Magazine Awards front runner) - he knows how to build to climaxes, and the sonorities there are extraordinary. Best of all, it makes you think 'what a great piece' even more than 'what a great recording'.

Glad to gain two nice recommendations for listening (the Janowski/Symphonia Domestica and Rouvali/Sibelius 1), and am also sitting here, after reading this post, amusing myself by conjuring up images of an "angry rice pudding." This reminds me also of an Alpine Symphony I heard, with Botstein conducting, for which I could use a clever phrase, but not having one come to hand can only report that, rather than rise to Alpine heights, that performance never left the lowest ground.

So now, I have to report that we were just sitting out on our front porch, gin and tonics in hand, looking over the beautiful hills on this balmy night. When I told J about the angry rice pudding, we both laughed out loud and, after pondering it a bit, she offered up a description of the acoustic effects of an angry rice pudding. To give you some idea, it was a bit like something out of the movie The Blob.

Many of the best lines come from dear J, and that one gave me a visual picture immediately. One adverb + adjective might be 'ferociously gloopy', which is a bit of an oxymoron. I envy you the balmy night looking at the hills. I've just come back from snow, 2 degrees and - eventually - brilliant sunshine at all hours of the day - Svalbard, definitely the most extreme place I've ever visited, but with wonderful music, interiors, food, people and nature - to deluges in London and mostly grey skies while central Europe sizzles. Somewhere in between would be good. Botstein has always been a bit earthbound as a conductor in my experience, though a brilliant mind and a good speaker.

“Somewhere in between would be good” is an excellent comment for all manner of things. I hope and expect you will report on Svalbard. Totally off point, been thinking of you as I read a novel I’m enjoying, wondering if you might know it. It’s “The Kites” by Romain Gary. My favorite character so far, along with the kite maker, is the chef.

No, I've not heard of the book or its author (blush). Since you recommend it, I'll certainly read it. Waiting to write up the Svalbard experience while the Arctic Phil lady gets the last batch of professional photos up. I have some good ones, though as J says if you just pointed a camera anywhere there, you'd get a similar amazed response from viewers. I'm still trying to digest an extraordinary experience.