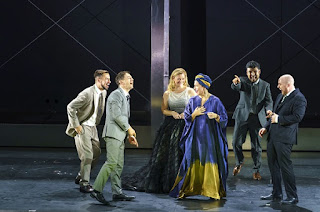 Let's be honest, I was wary of devoting even three classes, rather than the usual five, of my Opera in Depth class to Handel's Agrippina. Could I do much more than just play various performances of the arias, touch on the loosely-adapted history? Would I find a good version on film? The answer to both questions, happily, was a sì, certo. 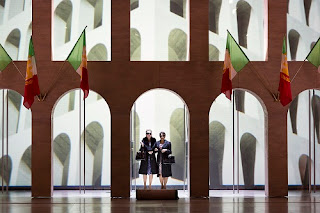 You can't help regretting the sometimes lumbering succession of arias in later Handel operas compared to the dramatic speed and agility with which, for instance, he deals with Agrippina's manipulation of the crowds in Act One or the swift reversal in Ottone's fortunes on the Capitol in Act Two (those three ariettas, albeit called arias, in which the two leading ladies and Nerone in quick succession kick him when he's down, one of the best things about Barrie Kosky's hit and miss Royal Opera production, pictured up top by Bill Cooper with Joyce DiDonato in the title role). This is true music-theatre, partly thanks to Cardinal Grimani's agile libretto: closer to L'incoronazione di Poppea than to a later Handel opera like Ariodante. 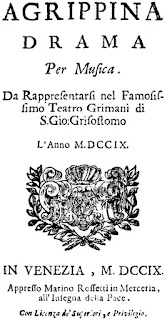 Filling its energy rather than overdoing it like Kosky is Robert Carsen's ever-stylish production for the Theater an der Wien (pictured second down), and having got hold of that on DVD I decided in the second class that we'd actually have four, and trim Gluck's Orfeo ed Euridice back by one (making four, four and two - on Weill's Der Silbersee - in a rather unusual term). For screening, I took sequences from each act in the Carsen production - Agrippina's deception of Poppea with Claudius's first visit to the younger woman's bedchamber (Patricia Bardon and Danielle de Niese, amazingly good, Mika Kares as a Berlusconi emperor, pictured below); the desertion of Ottone (countertenor Filippo Mineccia, new to me, is well complemented by Jake Arditt's well-acted, kid-psycho Nero); and the bedroom farce of Act 3. Never thought I'd find myself objecting to cuts and re-ordering, but I missed the arias Carsen axes, and some of the dramatic sequencing. 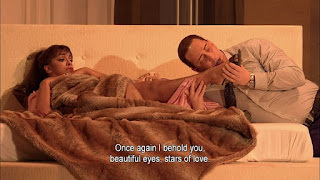 Aria-wise, there was one top recording to use as a benchmark, orchestrally the liveliest of the lot from John Eliot Gardiner and the English Baroque soloists - 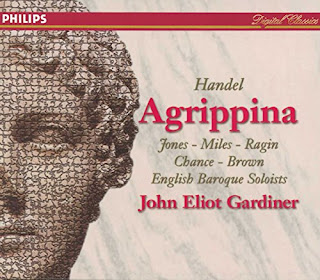 and a good chance to catch great Handel voices, among them Ann Hallenberg, Lorraine Hunt Lieberson, Catherine Robbin (whatever happened to her?), Veronique Gens and Philippe Jaroussky. Most interesting to me were the comparisons to be made with Handel's later adaptations of many of the arias, already drawn from his many Italian cantatas. For these, I'm immensely grateful to Winton Dean and John Merrill Knapp in Handel's Operas 1704-26 (Oxford), providing a table at the back showing just what was re-used where. Admittedly this only got me as far as Rodelinda, but I was already tying myself in knots searching for correspondences. Three are particularly interesting, only one of them, I think, as successful as the original: Agrippina's 'Alma mia', splendid in itself - this is Anna Bonitatibus, vocally splendid at the Grange Festival, though the orchestral support is not ideally well sprung -


only needs a couple of notes turning around as Armida's 'Molto voglio' in Rinaldo (Carsen's durable Glyndebourne schoolroom production, with Brenda Rae - a marvellous Lulu at ENO).


Postscript: listening around, as I often do when I don't want to let a subject go, I found an old LP with Janet Baker singing two of Handel's Italian cantatas, a labour of love between her and the late Raymond Leppard conducting the English Chamber Orchestra. Contrary to his assertion that 'Ah! crudel, nel pianto mio' 'was probably composed in England towards the end of Handel's life', it's one of the many Rome works dating from 1707. And here, in the extended Sinfonia which has very little to do, mood wise, with what follows, is what can safely be said to be the first version of the oboe tune used in the two arias above. With apologies for the artwork, here's that performance on YouTube.


Ottone's aria which marks the high expressive point and lowest ebb of fortune in Agrippina's Act Two, 'Voi che udite', loses the emotional twist of the first oboe so important throughout the opera (was there a master exponent in Venice?) and some of its depth as Teofane's 'Affanni del pensier' in Ottone; while Claudio's 'Io di Roma' - magnificently rethought as a moment where everything turns nasty for Poppea in Carsen's production - is just the right length, but becomes over-extended as Polyphemus's 'Cease to beauty' in Acis and Galatea. Most surprising is that the splendid and seriously underrated chorus-for-the-principals 'Di timpani e trombe' becomes in part Argante's utterly memorable 'Sibillar gli angui d'Aletto' in Rinaldo (so well sung by Gerald Finley on the Hogwood recording). 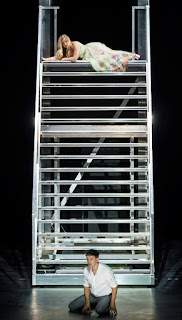 There's more, but I mustn't regurgitate everything the students got to hear. Gluck should be a very different 18th century experience. Delighted that Ian Page of Classical Opera, whose performance of the trimmed Orfeo for ducal nuptials was fascinating to hear, and Iestyn Davies - Ottone in the Royal Opera Agrippina (pictured above with the equally fabulous Lucy Crowe ar Covent Garden) and Orfeo in a new recording of the Gluck - will be our very special guests on two of the Mondays.
Posted by David at 08:04

As always I am envious of the lucky people who are in your classes. And thank you for reminding me of the Janet Baker - Raymond Leppard cantata. I had not visited it in far too long.

You were asking about Catherine Robbin - she retired from singing in 2003. She was dean of the vocal music programme at York University in Toronto from 2000 until she retired in 2018.

Thanks for intelligence about Catherine Robbin. That was a rare voice. I was very surprised, when I did a Radio 3 Building a Library on Berlioz's Romeo et Juliette, to find her 'Strophes' the most beautiful - and good French, too. Baker sounds so radiant on that LP, especially in the 'Armida abbandonata'.

I can’t imagine what it took in listening time to find those correspondences, but was glad to take advantage of your hard work! The Janet Baker oboe opening was pure delight. A friend will be attending the Agrippina that comes to the Met. Here’s the cast, etc.: “Handel’s tale of intrigue and impropriety in ancient Rome receives its first Met performances, with star mezzo-soprano Joyce DiDonato as the controlling, power-hungry Agrippina and Harry Bicket conducting. Sir David McVicar’s production ingeniously reframes the action of this black comedy about the abuse of power to “the present,” where it should loudly resonate. The all-star cast features mezzo-soprano Kate Lindsey as Agrippina’s son and future emperor Nerone, soprano Brenda Rae as the seductive Poppea, countertenor Iestyn Davies as the ambitious officer Ottone, and bass Matthew Rose as the weary emperor Claudius.” I suspect moving the production to “the present” will give free reign to over the top referencing that will not work, but what do I know?

I won't deny that it took a lot of time and that before the last class I was tying myself in knots trying to get all the examples lined up. I think the Met has done well to choose the McVicar production, assuming it's the one that originated at ENO: it was much wittier than the Kosky. A male Nero would be preferable (Christine Rice was vocally excellent at ENO but didn't quite look the young Goth), but Rae and Davies should be top notch. Are you not tempted to go? Handel at the Met sounds pretty crazy to me, but that one should be a treat.

That you've got Davies for your class is pretty darned impressive, BTW. It's doubtful I'll take in the opera, but I am pleased to report that I found the Baker CD you identified. It's wonderful. Am listening to it as I write!

Our friend Andrew Hammond - J's pal when they sang in the Glyndebourne Chorus together, now Chaplain of King's College Cambridge and soon to move to St John's - discovered Iestyn when he worked for Van Walsum Management. I can remember his absolute certainty that ID would become one of the leading counter-tenors in the world. And he was, of course, right. Isn't the Baker Armida sensational?

I don't have a basis for comparison, but it's hard to imagine anyone else topping her gorgeous, elegant singing in this piece (and everything on the CD).